Give
HinduPost is the voice of Hindus. Support us. Protect Dharma
GIVE
16.4 C
Sringeri 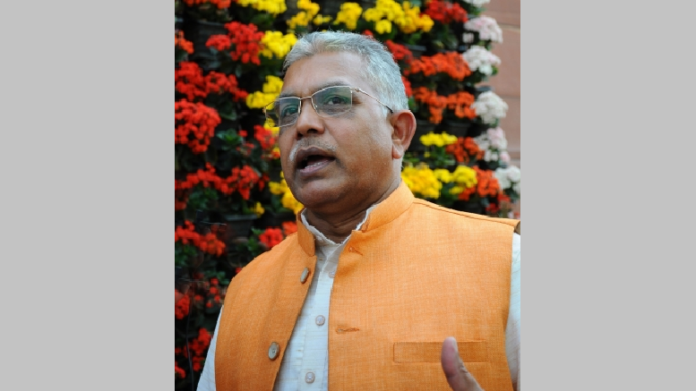 The coming year is politically crucial for West Bengal as the three-tier panchayat elections, perceived to be the curtain-raiser for the 2024 Lok Sabha polls, are scheduled to be held in 2023.

For BJP, the rural local body polls are extremely crucial to maintain its principal Opposition status in the state. However, things would not be that easy for the saffron camp considering the recent resurrection of CPI(M)-led Left Front in the state.

In an exclusive interview with Sumanta Ray Chaudhuri of IANS, the BJP’s national vice-president and Lok Sabha MP from Medinipur, West Bengal, Dilip Ghosh, who’s popular in the media circles for his maverick oration style, throws some light on his party’s strategy for the panchayat polls.

Q: Panchayat polls in West Bengal, as we are aware, have been traditionally marred by violence, bloodbath and body-counts. What is your plan to counter these issues in the rural local body polls next year?

A: Ideally, the panchayat polls would have been conducted under the security cover of the central armed forces. But the West Bengal State Election Commission, which is just an extended arm of the state government or rather the ruling Trinamool Congress, will never agree to that. So, our legal attempts to at least ensure some presence of the central armed forces on the polling and counting days will continue.

We will, however, not be depending on that only. So, we have hit the ground early this time to unite people and prepare them to resist the attempts of violence by the ruling party goons. In the pockets where BJP has a strong organisational presence, our dedicated party workers will resist it (violence attempts). In other parts, the resistance (against the violence) will be seen jointly from our party workers and common people.

Q: In panchayat polls, considering the grassroots level sentiment, things often do not move in the expected political lines as it does in the Assembly or the Lok Sabha polls. So, when you speak of unity of people do you mean an unofficial understanding between opposition parties?

A: When I speak of the joint opposition by people, the call is for all people who want to resist the onslaught of ruling Trinamool Congress goons in the panchayat polls. So why do you think that the call is only for the non-Trinamool supporters?

In several pockets in West Bengal even Trinamool Congress supporters, who are weak, are subjected to humiliation from their own partymen. My call for unity of people is meant for them as well.

Q: What will be the main issue that you will raise while campaigning for the panchayat polls?

A: We will raise the issue of corruption in the functioning of the entire panchayat system in the state. As you can see, the media is reporting everyday what kind of corruption has taken place in implementation of Centre-sponsored schemes specially in Mahatma Gandhi National Rural Employment Guarantee Act and Pradhan Mantri Awas Yojana.

Either the money had gone to the pockets of Trinamool Congress leaders or only the party activists are getting the benefits under the schemes. People already owning palatial mansions have got their names listed for the housing scheme. The Union government was often forced to stop payments under these schemes because of the corruption in the state.

The grievances of the people are rising over such matters. So, our task will be to convince people that BJP-run tiers in the panchayat system will not let such corruption happen while implementing centrally sponsored schemes.

Q: Certain dole schemes, especially Lokkhir Bhandar, are still helping Trinamool Congress to maintain its popularity among rural population especially among the woman voters. How do you plan to counter that?

A: This is something which we need to seriously address. I agree that such dole schemes have a level of attraction among certain sections of the people. But in reality, Chief Minister Mamata Banerjee is cheating the people of rural Bengal through these schemes by keeping them deprived of the bigger fruits of economic development.

She is paying a monthly amount of Rs 500 to the women in the name of Lokkhir Bhandar and in this process she is paving the way for her brothers in the party to loot crores of rupees. The people of West Bengal have started realising this cheating in the name of dole schemes, but surely, we will have to go a long way in convincing a larger mass on this count.

Q: The 2018 panchayat polls gave the first indication that BJP is emerging as the principal opposition party in West Bengal, the success of which inflated further in the 2019 Lok Sabha polls. So, what is your forecast of your party’s performance in the 2023 rural civic body polls?

A: Undoubtedly, the performance will be much better this time. Remember that we contested the 2018 panchayat polls with a much weaker organisational network in the rural pockets in the state.

On the contrary, our organisational base is much stronger in rural Bengal now, though there are rooms for further improvement. So, if we can ensure an overall peaceful polling process, and as I said earlier unite and involve people in combating the ruling party onslaught, the prospects of a much better performance are brighter this time.