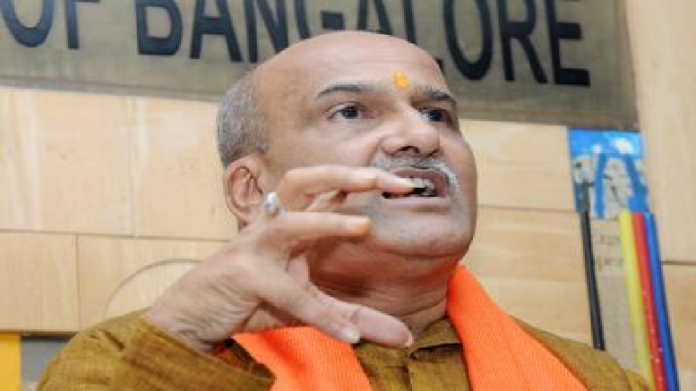 In what is being seen as a setback to the ruling BJP in Karnataka, Srirama Sena founder Pramod Muthalik announced on Sunday that 25 people who are “staunch Hindutva followers” will contest in the upcoming assembly elections, which will be held in less than six months.

Talking to reporters, Muthalik stated the decision had been taken for the protection of Hindus. He also swore to end Datta Peetha row, total prevention of cow slaughter, stopping of conversion activities and ‘love jihad’.

“The ruling BJP had taken political benefits out of the Datta Peetha struggle spanning over 25 years. BJP took a shape to protect Hindutva and honesty… to make policies that ensure the safety of Hindus in Vidhana Soudha and Parliament, But, barring Prime Minister Narendra Modi and Uttar Pradesh Chief Minister Yogi Adityanath, no one is working towards protecting Hindus,” he maintained.

The criminals and rowdy-sheeters are roaming freely in the society. There is no attempt to punish them. Hindu workers are being killed. Those who won in the name of Hindutva could not protect Hindus, Muthalik said.

“In this background, staunch Hindutva people, religious leaders will enter politics and save Hindutva,” he said.

BJP insiders submitted that the move is a setback for them as a close contest is expected between the opposition Congress and ruling BJP.

It could also prove advantageous for the Janata Dal-Secular which is making all efforts to become “king maker” by winning 20-30 seats.