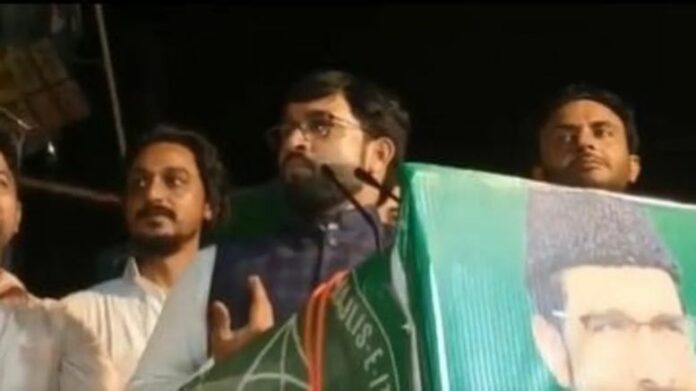 Hindu hatred is being mainstreamed in Indian politics by the secular-leftist-Abrahamic cabal that often comes across in the form of hate speech against Hindus. The latest to indulge in hate speech against the ‘majority’ community is AIMIM (All India Majlis-e-Ittehad-ul Muslimeen) leader Shaukat Ali.

“Hindus are insects ruled by Muslims for 832 years. You used to bow before Muslim rulers with folded hands. Who is more secular than us? Akbar married Jodha bai and made her the queen of Hindustan”, Ali says in his speech filled with hatred while addressing a gathering in Sambhal.

Ali addressed a sadhu and stated that when Muslims unite the sadhu would fear for his life. Much of his speech threatened the majority and he was cheered by the audience.

People say we have three marriages. Even if we have two marriages, we give respect to both wives in society, but you (Hindus) marry one and have three mistresses without informing anyone and you neither respect your wife nor the mistress. But if we have two weddings, we keep them with respect and our children’s names are also on the ration card.

Hindutva will not decide who will wear what in the country, but the constitution will. Shaukat Ali further said that “the BJP is working to break the country by raising such issues”.

“Because it is so simple to attack Muslims, issues like madrassa, mob lynching, waqf, and hijab are being discussed,” Ali said.

Ali’s comments come in the background of AIMIM chief Owaisi comparing hijab and bikini. “If not hijab, should we wear a bikini? If you want, you can wear it. Why are you bent upon finishing off our religion, culture and traditions like hijab and beard”, Owaisi said.

The myth of Islamists ruling Hindus for 800 years has been propagated despite evidence to the contrary. In its Heroic Hindu Resistance series, HinduPost highlighted the stiff resistance put up by Hindu rulers that ensured Islamic invaders were kept away from overrunning Bharat as they did in other nations.

It must be noted that it took seven decades of relentless efforts on the part of Arabs to merely secure a foothold in Sindh. Despite centuries of invasions, their rule was confined to the two petty states of Multan and Mansurah. Hindu power was revived in Sindh in 715 CE by Rai Jaisiah, who returned from Brahmanabad.

The resistance by Nagabhata I Pratihara and Avanijanashraya Pulakesin Chalukya stopped the victory march of the marauding Arab armies. He put in his entire might, and in the fierce battle that ensued, Pulakesin emerged victorious and destroyed the Arab forces so much so that the Arabs lost all the regions they had conquered over the years.

“Except within areas where Turkish armies operated, the India of the age belonged to the heroes of the resistance. Outside this area lay large parts of North India and the whole of the South-in fact three-fourths of the country where India followed its unbroken way of life”, opines KM Munshi about the period 1000-1300 CE.

In essence, the period 1526-1707 CE saw the Mughals establish their power over almost the whole of Bharat. At the beginning of this period, the Rajputs in the north, the Deccan sultanates, and the Hindu Vijayanagar empire played a prominent role in Bharat’s history alongside the Mughals. The Marathas and Sikhs rose to prominence towards the end of this period, coinciding with the decline of the Mughals.

It was effectively only during the Mughal period from Akbar to Aurangzeb that the Muslim rule extended over most of Bharat. This is merely 151 years. However, it must be remembered that even during this period, the Marathas and Vijayanagara kingdoms, among others maintained their independent principalities.

The Muslim rule was confined to the Bharatiya sub-continent’s Urdu-speaking areas, known as Hindustan. The myth of 800-year Muslim rule over Bharat originates in the Muslim domination over the Urdu-speaking areas (probably Delhi and adjoining areas). It is, therefore, safe to conclude that the Islamic invaders could never overrun the whole of Bharat in the face of brave Hindu resistance.

Shaukat Ali said that Muslims respect women through polygamy while Hindus don’t. Let us point out some instances of Muslims ‘respecting’ women.

A shocking incident related to talaq and halala surfaced from Uttarakhand where a 28-year-old woman after divorce, entered into Halala with a 65-year-old elderly man, who later refused to give divorce to her. Due to this, the woman is unable to re-marry her first husband.

Nasima, a resident of Ranjitpur village in Murshidabad district of West Bengal and mother of two children (a boy – 14, girl – 12), was given triple talaq by her husband Rabiul. Nasima wasn’t present when he uttered talaq 3 times and she only heard about it from other villagers, yet had to leave for her parent’s place along with her children. Later, the couple reconciled but an arbitration meeting was conducted by an Islamic society and the village head ruled that Nasima has to undergo Nikah Halala before she can ‘remarry’ her husband.

In another case from Bareilly, a father-in-law insisted that he would allow his son Saleem and daughter-in-law Nusrat to remarry only after halala with him. Nusrat’s husband Saleem had thrown her out of the house for dowry after giving triple talaq a few years after marriage. A father-in-law wanting to do halala of his daughter-in-law surely amounts to respecting women.

Ali’s unsubstantiated allegations against Hindu society are merely a means to divert attention from the rot in the Islamist society where raping Hindu women is considered fair. In a horrific case of gang rape reported from Madhya Pradesh’s Indore, religiously indoctrinated four Islamists drugged and gang raped a pregnant Hindu woman.

When the woman pleaded with her assaulters to spare her, they chillingly said, “We will go to Jannat (heaven) if we have sex with Hindu women”. When she pointed out that she is married and six months pregnant, they said “everything is fair in Islam.”

Contradicting Ali, Mathura’s Arshi Khan said that women have no respect in Islam while embracing Hindu Dharma in 2018. Late Shri Ram Swarup has written about the position of Muslim women in his book Women in Islam.

Shaukat Ali’s rants reminded us of Maulana Tauqeer Raza who wanted Hindus including PM Modi and HM Amit Shah to convert to Islam. He talked about the universal adoption of Islam as the way to ‘world peace’, while running down Hindu Dharma and distorting sacred Dharmic concepts with the practised ease of a trained polemicist and proselytizer.

Just like Raza distorted the story of Draupadi, Ali is spreading fabricated stories about Hindu society with the intention to malign the community.