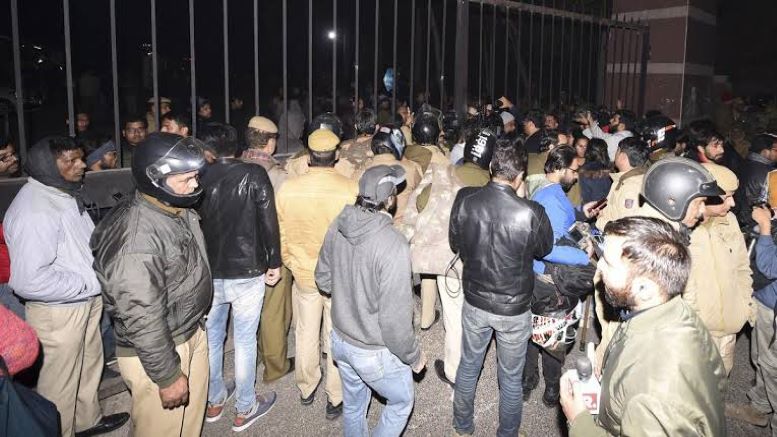 On Sunday, major violence broke out in the University campus as masked goons unleashed havoc. We already have Lutyens’ media and Khan Market gang trying to whitewash the crimes of the leftists and blame the Central Government and ABVP (Akhil Bharatiya Vidyarthi Parishad), the RSS-affiliated student body.

We had the usual ‘fascist, Sanghi, Hindutva’ rhetoric from the entire opposition – from leftists (who are experts at passing off their crimes as those perpetrated by their victims) to Trinamool, AAP and Congress. There were also the usual media suspects like Barkha Dutt, The Wire, The Quint etc attempting to paint the entire incident as an attack on ‘democracy’ in an attempt to ‘intimidate students’ who are protesting against the government’s policies.

What mainstream media (MSM) often keeps forgetting is that we are living in the age of social media (SM) which busts their lies efficiently and with proof. However, since MSM still has a stranglehold on majority of the news, the real picture remains confined to SM leaving a vast majority with the lies that they see on TV.

We shall take a look at how the entire story unfolded and what the ‘real picture’ is. This is the chronology of events as per ground sources:

In Oct last year, a controversy was manufactured over JNU ‘fee hike’. The only thing hiked in reality was some hostel & mess related expenses such as double-seater room rent from Rs. 10 per month – yes, you read that right –  to Rs. 300 per month. Incidentally, JNU is the most subsidized public University in the country, with taxpayer spending upwards of Rs 6 lakh on each JNU student per year.

But the leftist-controlled student union used this controversy to seize control of the campus and paralyse the official administration. They slapped locks on gates of all school buildings, not allowing even professors to enter their own offices.

Science professors weren’t allowed entry to their labs in a pathetic display of hooliganism in the name of ‘student activism’. Even more appalling was the fact that the Vice-Chancellor (VC) was targeted and the entire university witnessed leftist goondaism at its best – wanton destruction of property!!!

On 24th November, JNUSU called for boycotting exams. However, since their calls failed to yield positive results, they resorted to the usual leftist technique of intimidation. Students wanting to appear for the exams were harassed and schools were shut down forcibly which led to classes being suspended.

Despite all these attempts at intimidation, students of JNU showed ample courage by appearing for the online exams in large numbers. The irked JNUSU which then attempted to stall registration for the upcoming semester scheduled for 1st to 5th January (without late fees) by calling for its boycott. Their call for complete boycott was again met with resistance from students who were genuinely interested in pursuing their courses.

This guy was beaten up after the speech by members of #JNU student union. The union is dominated by Left Parties members. It happened in front of hundreds of students who wanted to register for next semester. Students associated with #Left parties wanted to cancel the process pic.twitter.com/Kn0yDidEJQ

In the above video a student is seen countering leftist goons and saying that: “The University is not a place for protesting and everybody’s registration will take place. Who are you to stall the registration process? There is a method to protest.  I’m a student as well”.

But communists being true to their ideology wouldn’t rest till they have imposed their will. On 3rd January, masked goons entered CIS (Communication and Information Services) premises on the university campus and broke the registration server and shut down the wifi as well.

Their brutality wasn’t just confined to property of JNU but was unleashed on common students and ABVP leaders as well; for the simple reason that they preferred to pursue their courses. This attack on CIS was allegedly led by former JNU president (2017-18) Geeta Kumari and other masked communists. The next day, on 4th Jan, ABVP activists and technical staff managed to restore the server and students against started registering and paying the new hostel fee. Again, the leftist goons stormed the CIS premises and damaged the servers and stopped registration. Why the administration played soft with these student goons and did not ask police to take them to task at the first hint of violence, is a question that needs to be answered.

A reign of terror was then unleashed after 4 PM  on Sunday, 5th January, when 200-300 masked goons entered the campus and selectively targeted ABVP activists. Armed with iron rods, they began attacking ABVP karyakartas in Periyar and subsequently Sabarmati hostels. The next target of the vandals was Mahi Mandvi. ABVP karyakartas were brutally attacked wherever JNUSU leftist goons could find them.

The left and their coterie (including Congress and its recently turned secular ally Shiv Sena) were quick to pass on the blame to ABVP, RSS, BJP and Sangh Parivar – basically anybody but their ideological allies. Unfortunately for them, we live in the age of SM when lies are caught easily and quickly.

As reported by @Piyush_mi, at 00:16 in the video, President of JNUSU and leader of the masked left thugs Aishe Ghosh can be seen making appearance and leading the Red Goons. Anymore doubt left as to who really are the masked goons spreading terror on JNU campus? #LeftAttacksJNU pic.twitter.com/X7fC1VdoBh

If there was any doubt of leftist involvement, then the ‘tukde tukde gang’ stepped in to remove any such misgivings. Umar Khalid of ‘Bharat tere tukde honge, Inshallah’ (Bharat will be broken into pieces, inshallah) fame led orchestrated protests in Mumbai in ‘solidarity’ with the JNU vandals.

To add to their woes and despite all  their attempts to present this as some kind of ‘student revolution’, leftist lies were busted by JNU administration itself who have issued a statement (pic) with regard to the entire incident clearly incriminating ‘agitating students’ for the violence unleashed on those who are interested in pursuing their academic goals.

Left is a master of spinning yarns and they know how to concoct cock and bull stories that would easily hoodwink the masses. The leftists have mastered the art of playing victims while actually perpetrating violence. It is time the left and its cronies are unmasked, and unmasking the masked JNU goons would be a good beginning.