Hold Pakistan Accountable For The Way It Treats Its Hindu Population 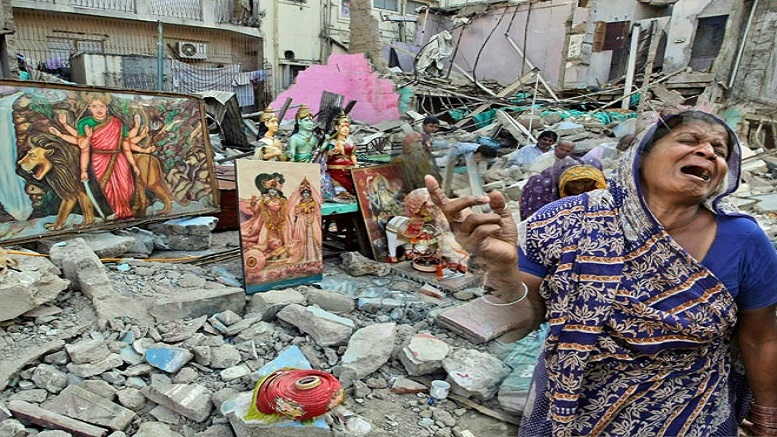 Pakistani Hindus are arguably the most persecuted minority community in the world, but strangely their plight is hardly noticed across the world, including in Bharat – the only homeland of Hindus. Even accounting for the fact that Pakistan is an “Islamic Republic”, and hence gets a waiver from being judged by the secular standards which we are told modern civilization demands, isn’t a State supposed to guarantee a basic right to live to all citizens? Let’s see if Pakistan is meeting even this very watered down expectation.

A recent moving piece by Dr. David Frawley should be required reading for all those who choose to live in denial about the plight of Pakistani Hindus. He says, “Pakistani Hindus are among the poorest of the poor and do only the most menial jobs. The most basic human rights are not given to them. Pakistani Hindus cannot own land or register their marriages. Their women are commonly abducted and there is little they can do about it. Pakistani courts seldom hear their pleas, or if they do, seldom rule in their favor. Sometimes paying of high ransoms may work to bring their daughters back, but overall Pakistani Hindus are too poor to afford these. A Pakistan Hindu Marriage Act has been in the courts for years but has not yet been approved, though Pakistan has continued a Christian Marriage Act from the British era.” (emphasis added)

And the reason for this sub-human treatment of a peaceful minority population is the pernicious propaganda against the Hindu way of life in every sphere of Pakistani life – education, politics and religion. As Dr. Frawley articulates, “Hinduism is denigrated in Pakistan textbooks as unholy and the Hindu past of Pakistan is almost eradicated from the record. Pakistanis are taught to distrust and look down upon Hindus, as kafirs, if not subhuman. The result is that Pakistani Hindus often face fierce religious hatred by people who do not even know them.” (emphasis added)

One of the most heart-rending aspects of the rampant discrimination faced by Hindus in Pakistan is the frequent abduction, rape and conversion of Hindu girls, even 6 year olds. According to this Asian Human Rights Commission report, every month some 20 to 25 girls are forcibly converted to Islam in the Sindh province of Pakistan alone. Listen to senior Pakistani journalist Najam Sethi on the chilling fate which awaits these girls after forced ‘marriages’ – he estimates over 90% of such girls are either killed or forced into prostitution after a few months. Only a few brave Pakistani journalists like Veengas write on these abductions like the plight of 12 year old Anjalee Bai. She has put together the below partial list of cases that she has personally tracked – 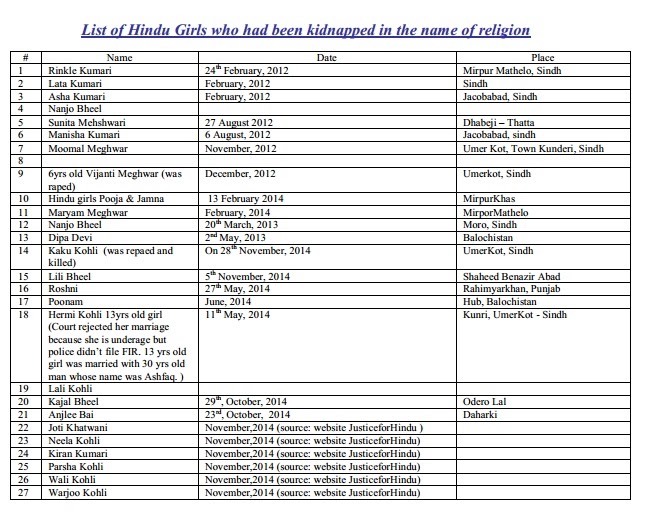 Hence it is no surprise that Pakistani Hindus are fleeing to Bharat in ever increasing numbers to seek refuge. There are estimated to be up to 2,00,000 Hindu and Sikh refugees residing at present in Bharat. But we, the citizens of Bharat, have failed abjectly in our duty to these people who have nowhere else to go.

The current Government has granted citizenship to 4,300 Hindu & Sikh refugees in its first year, as compared to the 1,023 citizenships handed out during the entire 5-year tenure of UPA-2. But the way Pakistani singer Adnan Sami was granted citizenship on a fast-track basis with personal intervention of the Home Ministry, while scores of Pakistani Hindu families are waiting interminably for citizenship and struggling under restrictive visa conditions, shows the long way we have to go. It is a matter of shame for all of us that this is what our Hindu brethren from Pakistan have to say:

“They (Hindus of Pak) came here with the sense that they are Hindus and will be warmly welcomed. But the scenario here is totally different.”

Apart from a few stray reports on the plight of Pakistani Hindus languishing in Bharat, our media has largely ignored their rampant persecution in Pakistan, and actually covers the Rohingya Muslim crisis with far more sympathy. Rohingya Muslims started leaving Myanmar after riots broke out in 2012 between them and Rakhine Buddhists over the gang-rape and murder of a Buddhist woman.

Today, there are 36,000 Rohingya Muslims residing across Bharat, and their alleged persecution in Myanmar enraged Islamists in Bharat so much that they unleashed gruesome violence at Azad Maidan, Mumbai in ‘protest’. It is pertinent to note that back in 1946, Rohingya Muslims had requested Jinnah to annexe their region in Myanmar and merge it with East Pakistan (today’s Bangladesh).

As we discuss another terror attack on Bharat which was hatched, planned and executed by the ‘Deep State’ of Pakistan, we are witnessing the same déjà-vu inducing commentary from experts on the perennial ‘should we talk or not’ question. But one factor has been missing from the debate – why isn’t justice and dignity for Hindus living in Pakistan one of the pre-conditions for any meaningful dialogue with that nation? If the Government of Bharat were to take such a stand, it would also help raise international awareness on the issue. Unless we force Pakistan to look within and root out the religious hatred that has sunk deep within its body politic, can we ever have normal relations with it?

There is an old adage “People get the government they deserve”. So it is incumbent upon us, the citizens of Bharat, to first take note of what is happening to the Hindus of Pakistan, lend them a helping hand in whatever way possible, and then force our political system to act by making this an election issue. But first we in Bharat must realize the obligation we have to support the cause of Hindus in Pakistan and elsewhere. If we don’t, then who will?