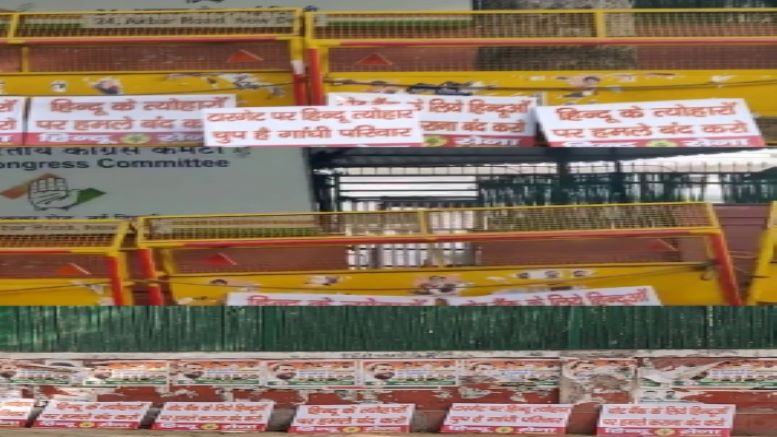 The Hindu Sena activists on Sunday morning put up posters outside the Congress Headquarters at 24, Akbar Road here questioning the party’s silence over the attacks during Hindu festivals.

Vishnu Gupta, the chief of Hindu Sena, alleged that the Aam Aadmi Party, Samajwadi Party and Congress give “protection to Rohingyas and Bangladeshi, who are plotters behind the attacks”.

“Hindu Sena won’t tolerate this politics of appeasement which is being done by the AAP, SP and Congress. They are helping all anti-nationals who attack Hindu festivals. They brought stay orders from the apex court in the favour of these anti-nationals elements. We oppose such politics,” said Gupta.

The Delhi Police were in the process of taking action against the Sena leaders. “FIR is being registered and further investigation is in process,” said Amrutha Guguloth, Deputy Commissioner of Police.Earlier, a senior police official said, “We came to know about this. We are discussing this with our legal team and senior officials to decide the future course of action.”

Last week, the Hindu Sena had put up posters outside Jawaharlal Nehru University where two groups of students had clashed over Ram Navami celebrations. The police had failed a case and had arrested persons associated with the organisation.