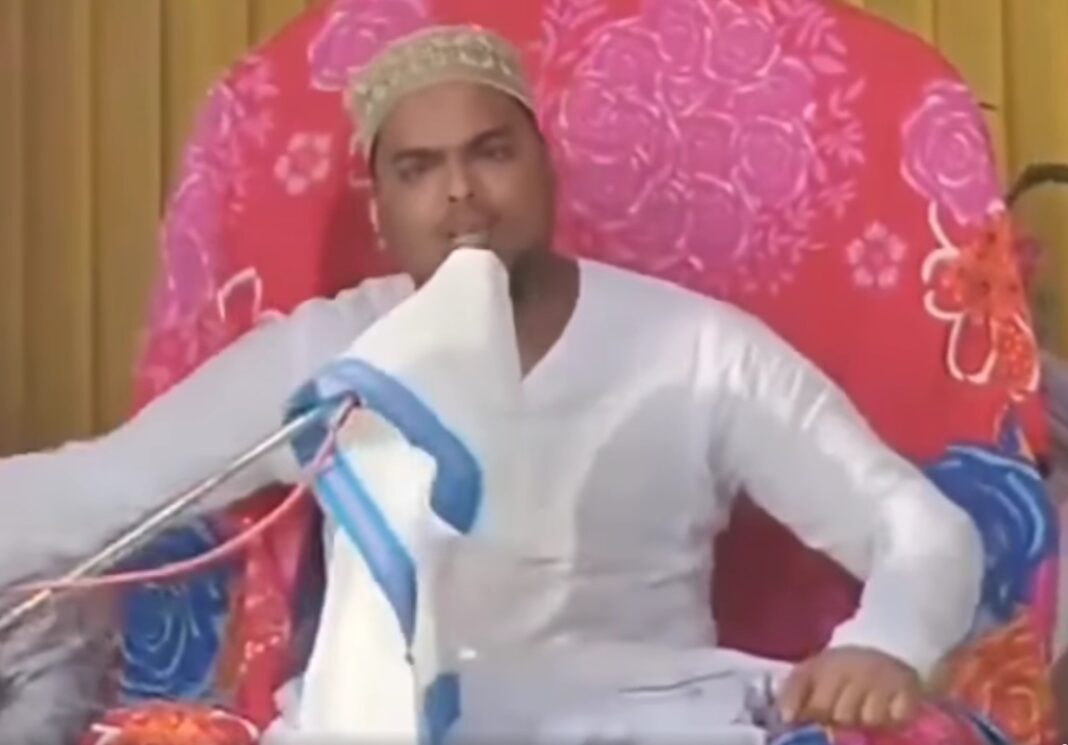 Abbas Siddiqui, the moulvi-turned-politician from West Bengal’s Furfura Sharif Sufi shrine who had made headlines for wishing death upon 50 lakh Bharatiyas (read ‘kafir’ Hindus) when the world was reeling under the threat of Coronavirus in the first half of 2020, has made another chilling comment.

In a recent video that has gone viral on social media, Siddiqui is seen delivering a provocative and incendiary speech while addressing an Islamic religious program in West Bengal’s North 24 Parganas on October 15. He said that those who placed a copy of the Quran near the feet of a deity at a Durga Puja pandal in Bangladesh should be beheaded.

On October 13, Islamists had alleged that Hindus had disrespected the Quran in a Durga Puja pandal in Cumilla, and used that as an excuse to launch a massive pogrom which lasted for well over a week and left hundreds of temples, shops and houses vandalized, people dead, and women raped.

Speaking in Bangla, the cleric declared that they can tolerate any atrocities on Muslims, be it charging them with “false police cases”, “tearing down their homes”, but they will never tolerate “defiling” of Islam, Allah, the Nabi (Prophet Mohammad) and the Quran. They will give their lives or behead anyone to avenge any such ‘insult’.

From the time the anti-Hindu pogrom started in Bangladesh, Hindu groups had claimed the Quran ‘desecration’ was fabricated and the Quran was deliberately placed at the feet of a Sri Hanuman murti in a Durga Puja pandal. Last week, it was proved that the Quran was indeed placed by a Muslim man, who was seen talking on CCTV to caretakers of a nearby mosque hours before carrying out this fabricated act that was used as an excuse to attack Hindus. Such false blasphemy allegations are a usual tactic of Islamists to attack non-Muslims in Bangladesh, Pakistan and even Bharat.

Siddiqui’s statement was thus nothing but a blatant justification of the brutalization of Bangladeshi Hindus. He further claimed in his speech that the “entire world is plotting against the one true religion of Islam”, and that the leader of this conspiracy is Israel.

He also mocked Hindus who decorate their Durga Puja mandaps with symbols of Islam, saying they should convert to Islam itself. It has become a new trend in some of the theme-based Durga Pujas held by well-funded clubs to include the Christian cross or the Islamic crescent moon to give their festival a “secular” face.

These attempts at gaining brownie points from Abrahamics fall flat as Siddiqui mocked, “I remember that a few years ago, a theme of Durga Puja pandal, Kaaba was also made. If Kaaba is liked so much then why don’t you embrace Islam.” He also advised Muslim youth to not attend Durga Puja.

This practice of excessive secularism may even put Hindus in harm’s way, should a mob of fanatic Muslims tear down a Durga Puja mandap for using Islamic symbols and then attack Hindu neighbourhoods claiming that the Hindus had ‘insulted Islam’.

Abbas Siddiqui is the great-grandson of Abu Bakr Siddiqui who established the Silsila-e-Furfura (Sufi order of the Furfura shrine). He entered the political landscape of West Bengal by founding the ironically named Indian Secular Front (ISF) in January 2021.

ISF contested had contested the WB assembly election in alliance with the Left Front (CPM and others) and Congress. Siddiqui’s brother, Mohammad Nawsad Siddique, is the lone ISF MLA in the WB Assembly.

BJP accused Siddiqui of trying to create communal unrest in the state with his ‘beheading’ remark and demanded his arrest while TMC spokesperson Kunal Ghosh took a dig at the silence of CPM leaders on the inflammatory remarks made by their political ally.

No action has been taken against Siddiqui as yet by the West Bengal administration.