Part 1: The Murder of Gauri Lankesh: Lawlessness in Karnataka

Part 2: The Gauri Lankesh Saga: Erasing the Line between Kannada Literature and Politics

One of the phenomena that continues to puzzle me is why do even open and free societies with enduring democratic traditions allow Communist ideology on their soil? What kind of nation allows the subsidising of violent revolutions from within, using taxpayer money? When the Communists — no matter what holy garb they wear, no matter in what compassionate tongue they speak — state their goal openly, why aren’t they taken at face value?

Indeed, world history is witness that treating Communists with kid gloves and/or ignoring them has resulted in genocides. Here’s a tidbit from the groundbreaking work, The Black Book of Communism listing Communist genocides across the world:

Indeed, there’s a similar Black Book of Indian Communism waiting to be written. These are the same folks who blew up railways tracks, sabotaged the freedom movement, connived with the British and the Muslim League and helped vivisect Bharat and littered the landscape of the Nizam’s territories with the dead bodies of innocent landed Hindu gentries. Post-independence, they quickly multiplied into becoming hydra-headed monsters — from Naxals to Maoists to various trade and student unions and were lent mainstream political respectability by the clueless Naboob, Jawaharlal Nehru.

And so, from the countryside of pre-Communist Russia and China to the jungles of South America to those of West Bengal, Andhra Pradesh, Chhatisgarh, Jharkhand, Odisha, and most recently, the pristine Western Ghats in Karnataka, these compassionate comrades have inflicted genocidal mayhem wherever they’ve gone.

The trajectory of Gauri Lankesh’s activism and alleged journalism dates back to the ugly days of anti-Brahminism, the Navya “literary movement,” and the stranglehold that the Marxists had over the academia, media, literary, and theatre establishment in Karnataka. Imbibing the hate-filled ideology of P Lakesh bang at home, and then in Bangalore University and later at IIMC, Delhi, a hotbed of rabid Communism, it’s unsurprising that she became a fanatic and lifelong supporter and enabler of Naxals.

All of it turned Red, all Red
Plants and trees which were green, flowers which were all white
Turned Red like they’d drunk blood
Grass and creepers turned Red…

Itappears that Comrade Saketh Rajan took this short poem by P Lankesh literally and transfigured the pristine, lush green jungles of Kuduremukha into Blood Red. Until his arrival, Kuduremukha was a paradise for trekkers, nature lovers, its environs an ideal place for serene contemplation amid the silent rhythm of nature. That’s exactly in keeping with the violent Communist ideology which hates nature. The guns of Comrade Saketh Rajan and his gang of armed terrorists instantly shattered the tranquil silence not only of the forest but terrorised the entire surroundings.

It was perhaps the first time that Karnataka got a taste of violent Naxal terrorists. The Government prohibited trekking. Guard posts, check posts, and stringent patrolling quickly followed. Apparently undeterred, the Naxals kept upping their ante following their practiced modus operandi: killing off informers, apostates, and even innocent people who they suspected were informers. And policemen. Giving them cover fire were the urban Naxals, a vast array of sympathetic comrades drawn from the academia, media, NGOs, and the rest as we shall see.

Comrade Saketh Rajan alias Prem alias Saki incidentally happened to be Gauri Lankesh’s senior both at Bangalore University and IIMC, Delhi. It was a close friendship that outlasted his encounter at the hands of Karnataka police in February 2005. Following his death, Gauri Lankesh wrote an obituary of sorts — guess where? Fittingly, in Tehelka. Let’s hear it in her own words.

“It all began with the killing of two Naxalites by the police in the Western Ghats on February 6. As news trickled in, it became clear that one of the Naxalites killed in the “encounter” was the CPI (Maoist) state secretary, Prem. But the fact that Prem was none other than Saket Rajan shocked many. From the colleges of Mysore to Delhi’s JNU campus, people started speaking of the intellectual brilliance of Saket whom they had known nearly two decades ago before he went underground.

Even as the police gloated over the prize ‘catch’, people from various fields mourned Saket’s demise. Above all, many spoke gloriously about the two books he had authored as ‘Saki’. The two volumes of Making History are remarkable for looking at Karnataka’s history from ‘below’. In fact, some portions are prescribed texts at a couple of universities in the state.

It was as if in death, Saket had begun to shine as the new star on the Karnataka sky…That such a man had been brutally felled by police created a sympathy wave for the Naxal cause.

There is a personal touch to the story that follows. I knew Saket when he was my senior at Bangalore University and at the Indian Institute of Mass Communication. He went underground sometime later.

After two decades, he resurfaced in June last year when I was one of the few handpicked journalists to attend the Naxalites’ first press conference. [Emphasis added]”

Apart from the generous whitewashing and patented glorification of a terrorist masquerading as a fighter for justice, etc, what’s notable is the absence of any mention of the revenge attack by Naxalites killing six cops and one innocent civilian in Pavagada.

Indeed, Saketh Rajan’s death exposed the exact extent of support that he enjoyed in the academic and media establishment in Karnataka. Ravi Belagere dedicated a weepy editorial to him in his rag, Hai Bangalore. Numerous professors and lecturers descended upon the media, wailing like jackals, ranting against the “brutal” “police state” of Karnataka, and related epithets. One only needs to read the outpouring of comradesque sympathy for him in the archives of various Karnataka papers to get a taste of how unhinged they had become. Here is a sample.

“The very thought of Saket Rajan makes me restless and I cant lay my fingers on one reason and explain why he makes me restless. Now in a restless state of mind, after reading Ashok Shettar’s column…When I was in my second year of UG that I started fancying armed revolution as a romantic idealist. In a few months I came across an interview of Comrade Prem in Lankesh Patrike. The editorial of Captain (Gauri Lankesh) also spoke of Com. Prem…Few months later some of my friends decided on a trek to Western Ghats. I agreed and we all went for a trek on 6 Feb 2005. While walking thorough the forests I kept remembering the description by Captain, in her editorial, on the path cutting through the forest to reach Com. Prem. I remember having recited the poem of Com. Prem to a friend of mine after speaking about him for a while and also telling my friend, in my romantic ideas of armed revolution, that I wouldn’t mind joining Com. Prem in the forest. [Emphasis added]

And it was over this interview that Indrajit Lankesh threw Gauri out of Lankesh Patrike, as we’ve seen in the previous part.

Indeed, one can also gauge the dangerous influence that Saketh Rajan had, and continues to have over thousands of impressionable young minds when one reads the Saketh Rajan Internet Memorial for Revolutionaries. A 2007 Hindustan Times piece warned tellingly about how Naxals and Maoists were busy “Inventing Naxalite heroes on web.”

“websites, blogs and groups sympathetic to Naxalites’ cause have sprouted on the net lately. The police officials may be unaware of internal Naxalite hierarchy but websites carry all such details, interviews with ultra-leftist leaders and even converse on strategy.”

If her support for Naxalism is on one side, the other side is her toxic hatred for everything Hindu, tiny samples of which we’ve seen in the first part of this series. Again, we can let her speak.

I can go on listing such vile headlines but to those interested, the complete archive of Gauri Lankesh Patrike is available here. But she fared worse on social media. Just two exhibits will suffice. 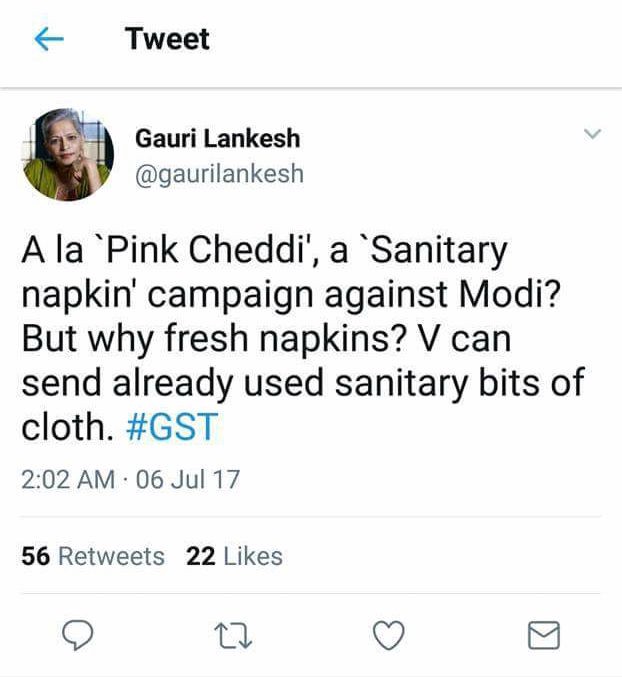 If this wasn’t enough, when the former Sarasanghachalak of the RSS, Sri Sudarshan passed away, she wrote, “no cheers, no tears.”

And this woman is now being hailed as a “thinker,” “martyr,” “hero,” and the rest. Which is kind of good because it has brought out the list and true colours of the members of the Far Left Hall of Shame, with the despicable online yellow paper, The Wire leading the charge in sainting Gauri Lankesh. Not to be outdone, its ideological compatriot, the extreme-Left portal, Scroll has carried a ridiculous piece by the part-time Carnatic musician and full-time Leftist stooge T M Krishna who I suspect hadn’t even heard her name when she was alive. I’m posting a tidbit because, well, I couldn’t resist sharing my agony:

“Who is responsible?
It is well known that I am no supporter of Narendra Modi, the Bharatiya Janata Party, Rashtriya Swayamsevak Sangh, Vishwa Hindu Parishad or their affiliates, but right now this is not just political distaste. I hold them morally responsible for permeating religious, intellectual and cultural hate in this country…While this shatranj goes on, their online stooges are let loose…They have made the rest of us crass and inhuman to the extent that we are unable to empathise when an RSS member is killed.”

There. The true mentality in their own words.

And the icing on this bitter cake is the shameless government headed by Siddaramaiah according her full state honours complete with the 21-gun salute.

But then, this is the selfsame Congress party whose legacy includes giving a Padma Bhushan Award to a traitor like Yashpal, responsible for the death of Bhagat Singh.

Oh, and the latest reports from the Kannada media say that the SIT tasked with investigating Gauri Lankesh’s murder have pointed their fingers of suspicion at a “most wanted” Naxalite named Vikram Gowda. What do you now say, Rajdeep Sardesai, Sagarika Ghose, Barkha Dutt, Shekhar Gupta, Shashi Tharoor, et al?

(This article first appeared at https://medium.com/the-deep-chronicles/the-gauri-lankesh-saga-when-the-lush-green-western-ghats-turned-red-7929cf1d5ba6 and is being reproduced with the consent of the author)