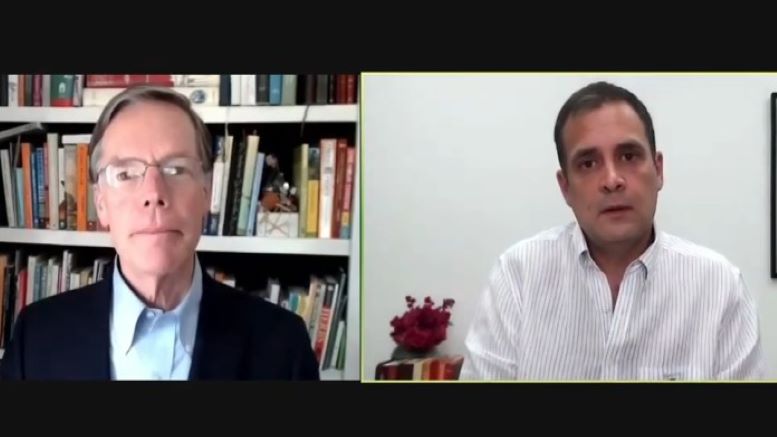 Rahul Gandhi, Congress’ on and off President as well as Bharat’s aspiring PM exposes his deep-rooted hatred for Bharat by literally begging the former American diplomat to intervene in Bharat’s internal affairs sparking outrage among Bharatiyas.

The bogey of ‘threat to democracy’ was used by Wayanad MP Gandhi while interacting online with ex-diplomat Nicholas Burns of Harvard Kennedy School. Harvard Kennedy School’s Institute of Politics had invited Gandhi to speak about the challenges and opportunities in Bharat and reflections on politics and public service.

Burns who is currently a Professor of Practice of Diplomacy and International Politics at Harvard’s John F. Kennedy School of Government was an earlier American ambassador to Greece. Gandhi’s request for American intervention in Bharat’s internal matters came towards the closing of the program. After Burns’ concluding remarks, Gandhi says he wants to put forwards certain concluding remarks and goes on to say:

It was apparent that Burns was taken aback at Gandhi wanting American comments on the internal matter of Bharat. But Gandhi doesn’t seem to have been done yet and goes on to add:

I fundamentally believe that America is a profound idea. The idea of freedom, the way it is encapsulated in your constitution is a very powerful idea. But you got to defend that idea. And that’s the real question.

Burns side-stepped Gandhi’s question and merely responded by saying that they would discuss these matters during the next sessions to be held after two weeks when they would be inviting another Bharatiya guest. Gandhi used the program as an opportunity to criticize the Modi government and basically did what Congress does best – putting forward false and unsubstantiated allegations.

There is a wholesale capture of the institutional framework of this country. There is absolute financial and media dominance that the BJP has. It is not just Congress, the BSP, SP, NCP are not winning elections: Congress' Rahul Gandhi

Gandhi opined that the institutional framework had been captured by the BJP which cannot be further from the truth. Contrary to Gandhi’s allegations, institutions in Bharat such as the judiciary are still wedded to the Nehruvian idea of Bharat which is apparent from their rulings. The judiciary bending to the whims and fancies of anti-Bharat forces time and again also busts the myth of a BJP-compliant judiciary.

Furthermore, Congress is in power in Punjab and Jharkhand while NCP has formed the government in alliance with Congress and Shiv Sena in Maharashtra. Therefore, allegations by Gandhi that no party other than BJP is winning elections is a mockery of Bharat’s electorate. Besides, it casts aspersions on the Election Commission of India which has been conducting free and fair elections.

To fight elections, I need institutional structures, I need a judicial system that protects me, I need a media that is reasonably free, I need financial parity, I need a whole set of structures that actually allow me to operate a political party. I don’t have them.

Rahul Gandhi uses a stray incident of electoral officers taking a lift from a vehicle belonging to a BJP candidate due to oversight in Assam to make out a case of EVM tampering. However, Election Commission has issued a clarification which says:

Polling party 149 met with an incident. The party comprised a presiding officer and three polling personnel. They were accompanied by police personnel comprising a constable and a Home Guard. At about 9.20 pm, the polling party hailed a passing vehicle and boarded it along with their EVM and other things without checking ownership of the vehicle. As reported by them, they moved towards Karimganj and as they reached Kanaishil, Karimganj at 11 pm,they had to slow down due to traffic.

It was only when they were surrounded by the mob that they realized that the vehicle belonged to a BJP candidate. The fairness of the Election Commission and that the body is free to function independently is apparent from the fact that a repoll has been ordered.

The Nehru family has a history of subverting institutions to serve their agenda. An elected MP of the country asking for foreign intervention in Bharat’s internal affairs shows the moral and intellectual bankruptcy of Rahul Gandhi and the Congress.