Freebies: a policy that can fetch votes but wreak havoc on Bharat’s Economy 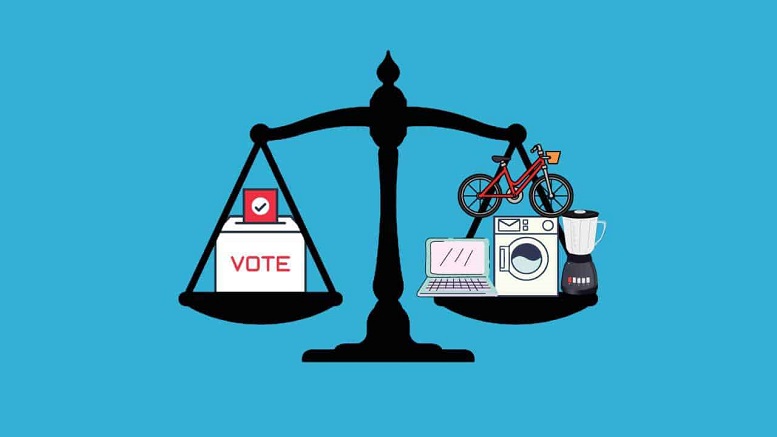 Sri Lanka’s economic crisis has been making the headlines for the last couple of weeks. We are witnessing the collapse of Sri Lanka as a state triggered by unviable economic policies, financial indiscipline, and unwarranted populist measures taken by the government there. The country has been caught in a dire situation with no immediate solution in sight.

The Bharatiya government has extended a helping hand and already made 2.4 billion USD worth of line of credit available along with several other forms of assistance. However, there is no doubt that Sri Lanka may take many years to recover from this financial crunch.

On Saturday Prime Minister Modi called a four-hour-long meeting with numerous top bureaucrats to discuss various matters in the backdrop of the Sri Lankan economic crisis. Several bureaucrats expressed concern at the freebies politics in several states while adding that such policies were financially unsustainable and impressing upon the PM that the time was ripe to take a balanced decision to achieve economic stability.

They raised an alarm over the freebies and populist initiatives promised by the political parties during the recently concluded assembly elections. They also cautioned that if this trend continues then few states may end up in a similar situation as cash-strapped Sri Lanka or Greece.

It was observed that state governments like Delhi, Punjab, Andhra Pradesh, West Bengal, and Telangana, have doled out financially unviable and unsustainable policies, which will lead to an economic catastrophe very soon, if not remedied now. Several political parties are providing free electricity, water, and other sops to satiate their vote bank, but these policies put tremendous strain on the state budget. Such policies also restrict their capacity to spend more on important social sectors like education and health.

As per reports, several central government officials also voiced their fears about the “unsustainable” consequences of moving to the old pension system in the states of Rajasthan and Chhattisgarh. We have seen how political parties are using the freebies as a tool to garner not only votes but to also remain in power so much so that they conveniently ignore the long-term consequences for state and central government finances.

The freebie culture was pioneered by K Kamaraj and upgraded to Nutritious Meal Scheme by AIADMK founder Late MGR. The fetched massive traction among the people, and that was the basic reason behind his massive popularity. His political heir late J Jayalalitha went one step ahead and promised free sarees, washing machines, pressure cookers, television sets, etc. to woo her voters, which also worked really well for the AIDMK. Other political parties took the cue and started promising freebies to influence their voters.

Readers may recall the 2009 general elections when Congress came up with various freebies and so-called public welfare schemes for the masses. Be it NREGA or the Agricultural loan waiver scheme, both schemes helped Congress to win the 2009 elections but put unprecedented stress on the country’s economy. The same scenario repeated in the 2006 Tamilnadu assembly elections when DMK won massively thanks to its popular free TV scheme. In 2012, the Uttar Pradesh assembly election was also won by Samajwadi Party on the promise of a free Laptop.

In 2015, the debutant political party Aam Aadmi Party (AAP) swept the Delhi assembly elections by promising free water, electricity, and bus travel to Delhi voters. In the 2021 Kerala Assembly election, the incumbent Left Democratic Front (LDF) was elected for a second straight term owing to its promise of subsidized rice and food kits. Just before the 2014 general elections, Congress promised a lot of freebies such as the Food Security Bill, the right to homesteads, the right to health – if it got re-elected. But this time freebies didn’t work as the Modi wave completely decimated Congress.

In a recent case, AAP has won with a thumping majority in Punjab assembly elections. It had promised to provide free electricity up to 300 units and Rs 1,000 per month for every woman aged 18 years and above in the state. It seems AAP has been handsomely rewarded by the voters of Punjab. However, it is important to note that AAP made similar promises in Uttrakhand and Goa, but it didn’t work in its favour.

BJP and Modi government has also sensed the opportunity and have started promising and distributing freebies to lure their core voters. While the free rations and mass vaccination drive during the COVID time were absolutely crucial for the masses, the minority scholarships and freebies being distributed by the Ministry of Minority Affairs are totally unwarranted, especially when nothing has been done towards the essential first step of dismantling the religious radicalization infrastructure within Muslim and Christian society.

Freebies – promises are hard to be fulfilled

We have seen how Congress promised loan waivers for farmers and unemployment allowance in Madhya Pradesh, Chattisgarh, and Rajasthan which worked for them as they won the previous assembly elections in these states. However, the implementation of these schemes is highly doubtful, as most of the farmers are yet to receive the promised benefits.

We have seen how the Delhi government’s water and bus travel subsidies have created havoc for the Delhi Jal Board and DTC respectively. It must be mentioned that both were revenue-generating entities a few years back but now are reeling from thousands of crores of debt. Similarly, other state governments also exhausted their funds in providing subsidies thereby putting tremendous strain on the state budgets and restricting their capability to allocate more finances for social sectors like education and health.

The financial indiscipline may spell doom for the economy of a state, which may result in bankruptcy. The situation has become so serious that Supreme Court had to issue a notice to the Election Commission over a complaint, where it was mentioned that political parties use freebies as a tool to woo their voters. The court observed that freebie culture is indeed a very serious issue.

Freebies Politics – what voters can do?

In the prevailing economic situation, a number of political parties are increasingly resorting to promising unsustainable freebies to win elections. We feel that the Election Commission must take stern steps to control this political tendency before the forthcoming State Assemblies elections and Lok Sabha Election in 2024.

As far as voters are concerned, we believe voters must also look at this situation from a different perspective. Voters must understand the impact of freebie promises on the economy as any economical issue ultimately impacts our lives because taxpayers have to bear the burden of such promises.

The case of Sri Lanka is an apt example where the ruling party gave massive tax relief to the people, but it devastated the revenue earning capacity of the government. This, in turn, led to Sri Lanka’s reserves depleting and most of the edible items are not available to the public. Hence, people must also understand their responsibility and reject any unsustainable promises by a political party.