Communists oppose Dalits getting domicile in Jammu and Kashmir 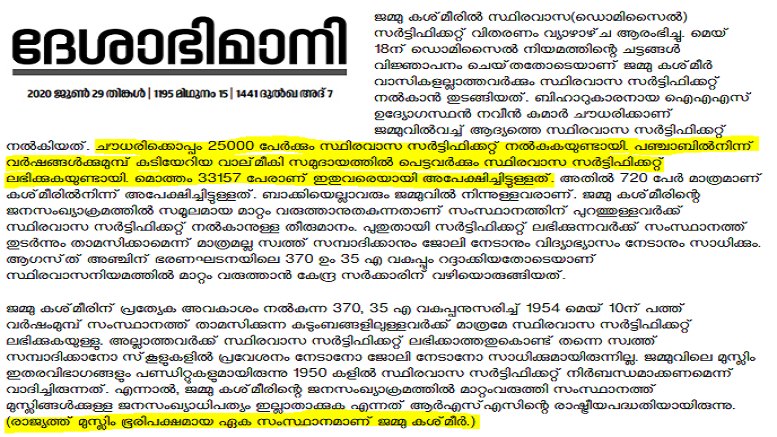 The Jammu and Kashmir administration recently issued domicile certificates under Jammu and Kashmir Grant Domicile Certificate (Production) Rules, 2020 to those residents who had been living there for more than 15 years. This has led to a lot of negative commentary in the Islamist as well as communist circles.

Background of domicile in Jammu and Kashmir

The Articles 370 and 35A empowered the Jammu and Kashmir legislature to define the state`s permanent residents and their special rights and privileges. These Articles of our constitution ended up denying benefits of citizenship, like ownership of property and equality in matter of public employment to people from other states of Bharat residing in J&K.

In 2008, 100 acres of land was sought by the Government of Bharat for building temporary shelters and facilities for Hindu pilgrims going to Amarnath. The Kashmiri separatists started a big stir against this step, citing these same articles.

Thus, these articles created and nurtured an atmosphere for separatism among Kashmiri Muslims and were a hurdle in the way of national integration. On 5th August, 2019 Home Minister, Sh. Amit Shah moved a resolution abolishing Article 370.

Now refugees who had come to Bharat from Pakistan and PoK, after 1947 and settled in J&K, were expected to be treated with equality. Many of the Gorkhas and people from Dalit community had suffered due to inequalities perpetuated by the erstwhile constitution of Jammu and Kashmir. Such residents of the state could not apply for government jobs and were not able to get admission in professional colleges.

Steps by the UT administration

This discrimination stands rectified now with domicile certificates being issued by the J&K administration. On 27th June 2020, around 25000 thousand, out of 33157 who had applied for domicile in Jammu and Kashmir, were granted domicile in the Union Territory. Any Bharatiya domiciled in Jammu and Kashmir, can now buy property, apply for government jobs and is eligible for admission into universities situated in Union Territory of J&K.

Applicants who wish to obtain domicile certificates can apply online by updating the Aadhaar number without the need to physically approach any government office. The certificates are being issued online. Navin Kumar Choudhary, an IAS officer became one of the first persons to be issued one. Failure to issue certificates within 7 days apparently draws a penalty of Rs.50,000/- to be recovered from the salary of the competent authority.

Under the new law, anyone who has spent 15 years in J&K and their children are eligible. Anyone having studied there for 7 years and appeared in 10th or 12th standard examinations are also eligible. Children of central government officials, public sector banks, central university staff and a whole list of others who have served a minimum of 10 years in J&K, stand to gain from this order. Migrants and their children who are registered with the relief and rehabilitation commissioner are also eligible. Children of J&K residents who are employed outside the state will also be issued certificates upon applying online.

The reaction from Islamist-Communist combine

The dirty tricks department of both the separatists and communists started their false news propaganda immediately. On the 29th of June, Deshabhimani, a mouthpiece of the Communist Party of India (Marxist) (CPM) in Kerala carried an editorial criticizing the granting of domicile in Jammu and Kashmir to ‘outsiders’. The gist of the article is given below:-

The Valmiki community who were brought in from Punjab years ago as sweepers started receiving the certificates. Of the 33000 applications, only 720 were received from Kashmir while the rest came from Jammu. This move will upset the demography of J&K. Article 370 and 35A allowed people and families who have stayed a minimum of 10 years before May 10th 1954, eligible for permanent residence certificates. Muslims and Pandits were the ones who demanded the permanent status in the 1950s.The political motive behind the current move by the RSS is to end the Muslim population majority in the state.

It is important to decode what the communist wish to say in the above article as well as to expose their agenda. I offer the following points in this regard:-

1.) They have mentioned that people of Valmiki caste have started receiving the certificates, a move which they say will ‘upset’ the demography. If they support the rights of Dalits, they should hail the move. If not, on what basis do they oppose granting of rights to Dalit Valmikis?

2.) Their demographic argument basically alleges that Hindus from other parts of Bharat will outnumber Kashmiri Muslims. This is the same kind of fear-mongering that terrorist organizations do in Kashmir against Bharat. How can a mere 25000 people who have already lived in the UT since last 15 years change demographic character of a population of 1.3 crores? Further, if they oppose change of religious demography of a state, what have they done against such changes in parts of Kerala, West UP, Mewat, North East and even in Andhra (a sitting YSRCP MP recently claimed that Andhra Pradesh is now 25% Christian on live TV)? Being self-proclaimed internationalists who speak for people of Palestine, have they protested against demographic change in Tibet and Xinjiang?

3.) They mention what Pandits demanded in 1950s. But they forget to mention about the exodus of half a million Pandits in the 1990s following large scale murders, rapes and threats. Was that not a change of demographic character? Indeed, recently Ajay Pandita, the only Hindu elected official in Kashmir valley was shot dead by the terrorists.

The opposition of communists to grant of domicile in Jammu and Kashmir to longtime residents, including Dalits, once again demonstrates how the CPM’s ideology is completely opposite to Bharat’s national interest. In this case their ill-informed anti-Hindu, anti-Bharat propaganda not only exposes their hypocrisy but also their intellectual bankruptcy.