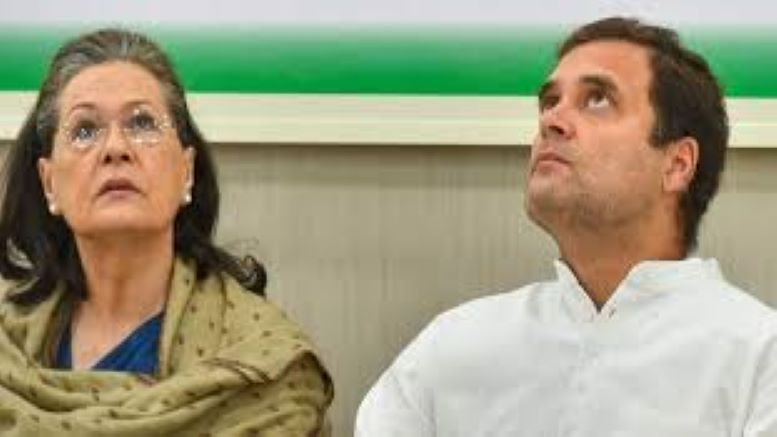 Congress further exposed its Hindudvesh and anti-Bharat stance when the #CongressToolkit was exposed. The toolkit also exposes the sinister agenda of the Congress and explains the flip-flops it had been making ever since the Chinese Virus pandemic hit Bharat.

Congress had opposed the first lockdown announced by PM Modi citing migrants not being given sufficient time to prepare for the lockdown but later it wanted the lockdown extended after the Centre permitted the economy to be partially opened up. Similarly, Congress and left parties were opposed to virtual rallies during the Bihar elections.

Congress manifesto in the run-up to the 2019 Lok Sabha (LS) elections promised implementation of farm reforms and yet the party backed farmer protests against the very same reforms it had promised to implement. Thereby, being a party to the Republic Day violence.

Congress spawned vaccine hesitancy by raising doubts regarding the efficacy of vaccines made in Bharat only to score political brownie points and hindered vaccine rollout. Congress has also been doing flip-flops on the vaccination drive. When vaccination drive was centralized, Congress wanted states to have the autonomy to decide for themselves and when the Centre decentralized the process, Congress and other regional parties demanded centralized procurement of vaccines.

Even as Congress denies allegations of any such toolkit by claiming the same to be one of BJP’s making, both Congress’ social media and mainstream media narrative are in sync with the contents of the toolkit. The Congress toolkit instructs its leaders on how the pandemic situation is to be used to target the Modi government by mounting an anti-Modi propaganda blitzkrieg.

Kumbh as a super spreader

The toolkit instructs Congress leaders and supporters to politicize the Kumbh Mela gathering in Uttarakhand and malign the Hindu sacred gathering by labelling it a super spreader. At the same time, in keeping with Congress’ minority appeasement policies, Eid is to be portrayed as a ‘happy social gathering’. The toolkit also asks to co-opt ‘like-minded’ local and international media to keep hammering the point of Kumbh Mela being a super spreader. No wonder Reuters had written an article titled  ‘Super-spreader’ erupts as devout Hindus throng Indian festival. There were other ‘like-minded’ media who had published similar articles labelling Kumbh as a super spreader that can be read accessed here, here, and here.

Swarajya Mag pointed out how Sonia Gandhi was also seen attacking the Centre for its decision to go ahead with the Kumbh. Calling it an event done for partisan gains, Sonia Gandhi labelled the Kumbh as a super-spreader. The toolkit clearly mentions that PM Cares Fund is to be made a target of attack. The Congress and several of its members including Rahul Gandhi have been continuously attacking (see here, here, here, here, and here) the fund even though the government has issued press releases last year giving out details regarding the expenditures made from the fund.

Additionally, celebrities who donate to PM Cares Fund are also to be targeted and aggressively questioned says the toolkit. No wonder, Australian cricketer Pat Cummins was attacked by people directly associated with Congress. The Congress toolkit also said that a narrative was to be build suggesting that faulty ventilators were sent by the Centre using PM Cares Fund to states such as Punjab and Chhattisgarh.

However, the fake narrative peddled by the states was exposed by the Centre which took them to task for the same. A report by the Times of India in this regard says:

Days after Punjab and Maharashtra raised concerns over the functioning of ventilators supplied to them by the Centre, the Union government has now responded and highlighted mismanagement of the medical equipment by the states.

It has directed the states to ensure smooth working of these delicate devices, asking the states to recalibrate settings of the machines according to geographical location, check O2 pressure in the pipelines and fix electrical settings. The states have also been asked to routinely change key consumables such as flow sensors and oxygen sensors on time, which it said many states were not doing, resulting in the dumping of ventilators for non-use.

This raises serious questions with regards to Congress risking human lives in states where it is in power only to score political points and further its anti-Modi propaganda.

Congress toolkit clearly mentions that the Gujarat model must be attacked in a bid to create anger not just against the state government but also against the Centre for ‘favouring’ BJP-ruled states. In keeping with this line of thought, Gujarat has come under severe attack but Congress and its media handmaidens.

HinduPost had reported how Marathi media had resorted to Maharashtra Vs Gujarat to cover up for the failures of the Maharashtra government where Congress is part of the coalition. The Marathi media wasn’t alone in this endeavour and several media houses ran similar reports. 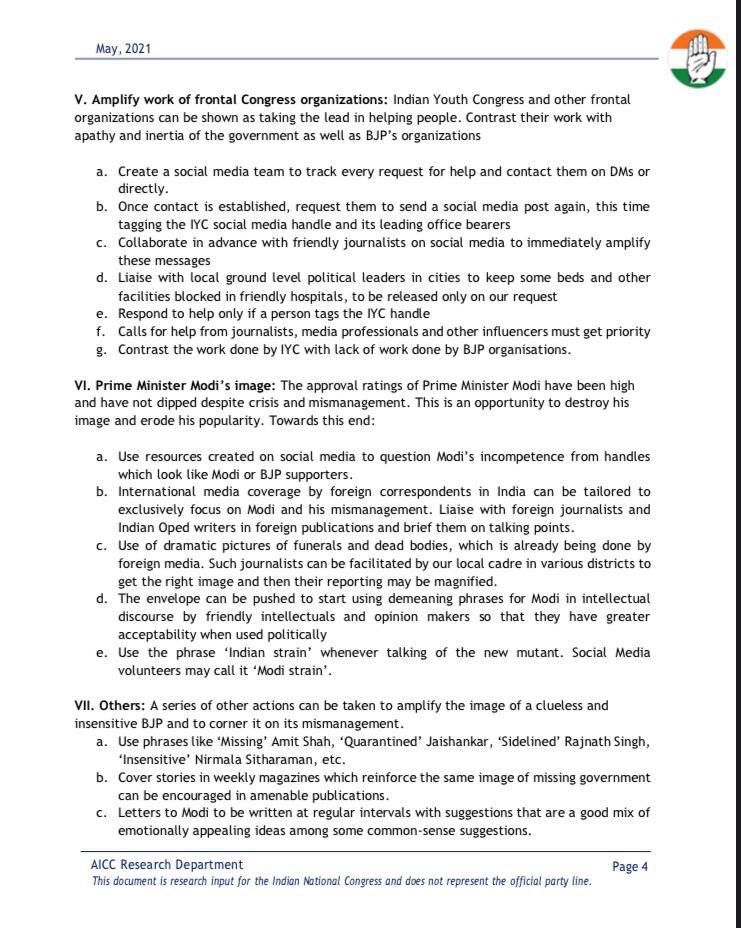 Stressing that the works of Congress frontal organizations such as Youth Congress were to be amplified, the toolkit shockingly says that only those who tag the Indian National Congress must be helped and support of local Congress leaders should be enlisted to hoard beds and other facilities in friendly hospitals which were to be released only to those whom the party approves.

Is it any surprise then that Congress had been supplying unsolicited oxygen cylinders to embassies while its Youth Congress President BV Srinivas was caught hoarding essential medical supplies. The actions of the Youth Congress President appears to be in perfect sync with what has been suggested in the toolkit. Everyone from media to Bollywood entertainers who cheerlead for Congress regularly to top Congress leader kept projecting BV Srinivas and his team as some kind of ‘messiah’ who were working for the people.

Tarnishing the image of PM Modi

One of the most important aims of the Congress toolkit was to obviously tarnish the image of PM Modi. Admitting that the PM’s approval ratings have not seen a downward trend even as the second wave of the Chinese Virus pandemic hit the country, the document said that dramatic visuals from funerals and of dead bodies must be used probably to create resentment and anger among the public.

Further, party workers and local cadres were to work with journalists to get the ‘right image’ and then ‘magnify’ the report. The document also stresses that the Bharatiya variant must be called the ‘Modi strain’. Many Congress supporters and Modi haters on social media have been resorting to using the term which certainly gives credence to the belief that the toolkit is genuine unlike what some Congress leaders would like us to believe.

The toolkit also makes mention of repeatedly sending letters with ‘common sense solutions’ mixed with an emotional appeal to attack the Prime Minister. 12 parties of the Mahagathbandhan had written to PM Modi but their letter was more about peddling the opposition’s agenda than offering genuine solutions to deal with the current crisis.

“BJP is propagating a fake “toolkit” on “COVID-19 mismanagement” & attributing it to AICC Research Department. We are filing an FIR for forgery against @jpnadda & @sambitswaraj When our country is devastated by COVID, instead of providing relief, BJP shamelessly concocts forgeries.”

Noting the desperation of the Congress, OpIndia says:

Even as Congress attempts to disassociate itself from the toolkit, the narrative being peddled on social and mainstream media perfectly syncs with the line mentioned in the document. There is ample evidence and facts to prove the correlation between the ideas mentioned in the Congress toolkit and the media narrative. Whether or not the toolkit is genuine, the undeniable fact is that the behaviour of the Congress, responses and actions of Congress leaders and propaganda by the ecosystem perfectly fits the Congress toolkit.