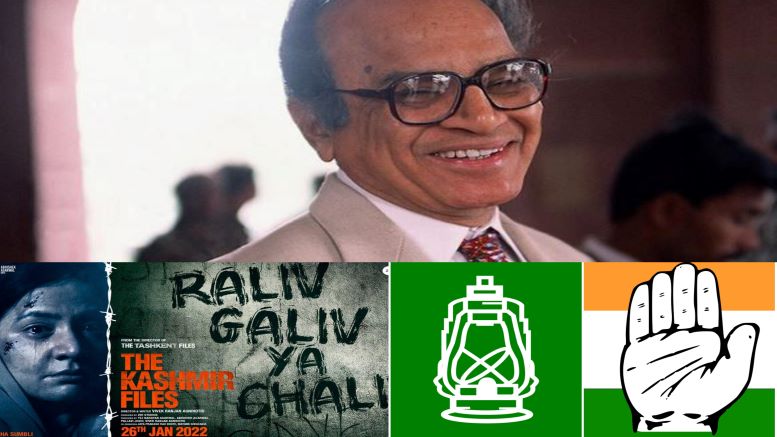 The success of the film ‘The Kashmir Files‘ has brought to the fore the Hindu hatred of ‘secular’ parties led by Congress once again. A tirade has been launched against the movie with ‘secular’ political parties competing against each other to whitewash the Islamic jihad that led to the genocide of the Kashmiri Hindus. Not only were they mercilessly butchered by the Islamists but were driven away from their homes leaving them as refugees in their own homeland.

But is there anything better we can expect from these political parties that bend over backward to please Islamists? Scamster Lalu Prasad Yadav’s party RJD (Rashtriya Janata Dal) has termed the movie ‘propaganda’. Not surprising, coming from a party that has nothing but scorn and hatred for the majority population of the country.

Interestingly, the party wants people to ‘read’ books to know the ‘real history’. Maybe, they themselves could do well by reading actual history rather than depending on propaganda peddled by the likes of Omar Abdullah and Rahul Gandhi. Are we expecting too much from a party whose leader tried to scuttle the Godhra train fire using a sham committee?

Congress siding with the butchers is also not astonishing considering the fact that the party is healthily Hindumisic. Congress took a two-pronged approach to dismiss the entire issue – first, by putting out factually incorrect data and bringing in the ‘Muslims have been killed in the valley’ red herring and second by blaming the then Governor Jagmohan and not forgetting to add that he was an ‘RSS man’.

OpIndia report on the matter notes:

In a Twitter thread from their official Congress Kerala handle, the Congress party started off their rant by downplaying the whole Kashmiri Hindu genocide itself. Saying 399 Kashmiri Hindus were killed by terrorists, and comparing it to the 15,000 deaths of Muslims in the valley over the last 3 decades as a result of terrorism.

Then Congress went on to blame Governor Jagmohan, the man who actually saved Kashmiri Hindus from a fate much worse than the exodus. “Jagmohan theory” is a long peddled lie by Congress and its cabal to give a clean chit to the Islamists for their actions in 1990…

…And if that was not enough, somehow Congress managed to make Jammu residents villains by claiming how Kashmiri Muslims were killed in Jammu during partition. This insinuates justification of the Kashmiri Pandit exodus and genocide by hands of Islamic terrorists ‘because Muslims were also killed’ theory…

…Congress cleverly tries to insinuate that the violence in 1990 happened overnight or was the only time Kashmiri Hindus left the valley. The community was targeted continuously since the partition. There was violence in the 70s, 80s when some Kashmiri Hindus left the valley. Those who stayed back till 1990s thought they were in safe hands amongst their neighbours. Except, in the 1990s even many of the neighbours turned on them. This is not a figment of imagination but lived trauma of thousands of Kashmiri Hindus.

Congress’ Kerala unit, from where their on and off president Rahul Gandhi is the MP, then went a step further to exonerate the jihadis by implying that Kashmiri Hindus were simply victims of terrorism like the Kashmiri Muslims.

The tirade against the late governor by the party is nothing new as is apparent from the open letter written by Late Shri Jagmohan himself to check the falsehoods spread by Rajiv Gandhi and other party leaders at his behest. Reproduced below are relevant excerpts, from the original letter shared by The New Indian Express report, that will blow the Congress lies to smithereens:

…Need I remind you that from the beginning of 1988, I had started sending “Warning Signals” to you about the gathering storm in Kashmir? But you and the power wielders around you had neither the time, nor the inclination, nor the vision, to see these signals. They were so clear, so pointed, that to ignore them was to commit sins of true historical proportions…

…To recapitulate and to serve as illustrations, I would refer to a few of these signals. In August 1988, after analysing the current and undercurrents, I had summed up the position thus: “The drum-beaters of parochialism and fundamentalism are working overtime. Subversion is on the increase. The shadows of events from across the border are lengthening. Lethal weapons have come in. More may be on the way”. In April 1989 I had desperately pleaded for immediate action…

…You, perhaps, never cared to know that all the components of the power structure had been virtually taken over by the subversives. For example, when Shabir Ahmed Shah was arrested in September 1989 on the Intelligence Bureau’s tip-off, Srinagar Deputy Commissioner flatly refused to sign the warrant of detention. Anantnag Deputy Commissioner adopted the same attitude. The Advocate-General did not appear before the Court to represent the state case. He tried to pass on the responsibility to the Additional Advocate General and the Government council. They, too, did not appear.

Do you not remember what happened on the day of Lok Sabha poll in November 22, 1989 ? In a translating gesture, TV sets were placed near some of the polling booths with placards reading “anyone who will cast his vote will get this.” No one in the administration of Dr. Farooq Abdullah took any step to remove such symbols of defiance of authority.

Let me remind you that Sopore is the hometown of Gulam Rasool Kar, who was at that time a Cabinet Minister in the State Government. It is also the home town of the Chairman of the Legislative Council, Habibullah, and also of the former National Conference MP and Cabinet Minister, Abdul Shah Vakil. Yet only five votes were cast in Sopore town. In Pattan, an area supposedly under the influence of Iftikar Hussain Ansari, the then Congress (I) Minister, not a single vote was cast. Such was the commitment and standing of your leaders and collaborators in the State. And you still thought that subversion and terrorism could be fought with such political and administrative instruments.

Around that point of time, when the police set-up was getting demoralised, when intelligence was fast drying up, when infiltrators in Services were bringing stories of subversive plans like TOPAC, your protégé Dr Farooq Abdullah was either going abroad or releasing 70 hardcore and highly motivated terrorists who were trained in the handling of dangerous weapons, who had contacts at the highest level in Pakistan occupied Kashmir, who knew all the devious routes of going to and returning from Pakistan and whose detention had been approved by the three-member advisory board presided over by the Chief Justice…

…The truth supported by the preponderence of evidence is that before January 19, 1990, the terrorist had become the real ruler. The ground had been yielded to him to such an extent that it dominated the public mind. He could virtually swim like a fish in the sea. Would it matter if the sea was subsequently surrounded?

In your attempt to hide all your sins of omission and commission in Kashmir and as a part of your small politics which cannot go beyond dividing people and creating vote banks, you took special pains to demolish all regard and respect which the Kashmiri masses, including the Muslim youth, had developed for me during my first term from April 26, 1984, to July 12, 1989. Against all facts, unassailable evidence and your own precious pronouncements, you started labelling me as anti-Muslim.

It wasn’t the ‘Jagmohan factor’ but minority appeasement and whitewashing jihadi crimes (that continues even today) factors that led to the genocide and subsequent mass exodus. No matter how hard Congress and its secular allies try to suppress the facts, truth never dies, particularly in today’s age of social media.

Despite facts on record to the contrary, the ‘secular’ parties want us to pretend that the Hindu genocide never happened in Kashmir just like they want us to believe that passengers set themselves afire in the Godhra train incident and the 2020 Delhi riots were no anti-Hindu conspiracy. Unless Hindus stand up to be counted, the so-called secular parties would continue to treat them as non-entities and keep burying the pain of the majority community (from partition to 1971 Bangladesh Hindu genocide to Godhra to Delhi anti-Hindu riots) deeper while giving clean chits to Islamist jihadis.