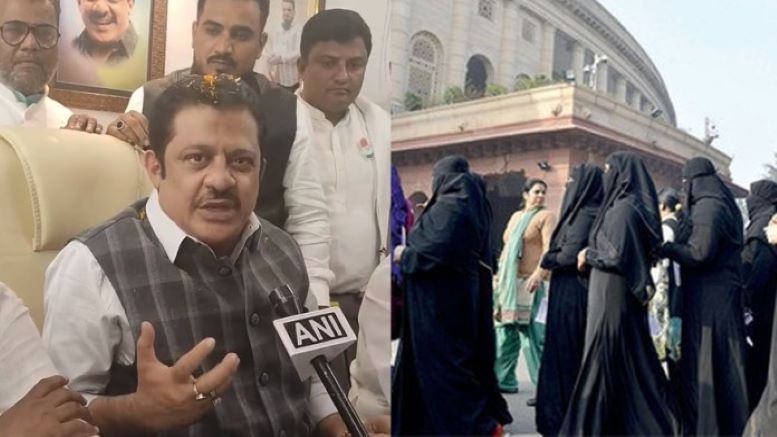 Congress MLA from Karnataka’s Chamrajpet constituency Zameer Ahmed Khan is the latest politician to jump onto the Hijab row bandwagon in order to score some brownie points by claiming that women who don’t wear hijab get raped.

He was of the opinion that the beauty of women is protected from potential rapists by the hijab. “Hijab means purdah in Islam, (those who are opposing it) may not have women and children in their house, if they had, they would have known it. The purpose of the hijab is after the girls grow up, it is used to keep them under Purdah, as their beauty should not be seen. Hijab is used to keep their beauty hidden”, he has been quoted as saying.

He added that rape rates are high in Bharat because women aren’t kept under purdah. He also stated that even though it isn’t compulsory, women who wish to keep their beauty hidden may wear it so that they prevent getting raped.

The MLA is wrong on several counts. First and foremost, the theory that women’s clothing leads to rapes has been debunked many times with Bharat’s Finance Minister Nirmala Sitharaman pointing out earlier that even elderly women and children get raped. In fact contrary to his claims, data indicates that fully clothed and burqa-clad women have also faced harassment.

Available country-wise rape statistics also show that the MLA’s claim of rape rates being high in Bharat is false. Bharat is ranked 95th among 119 countries. The rate of rape in Bharat is 1.81 per 100,000 population.

The Congress MLA’s views are contradictory not just to available data but also to that of his own party leadership. While the MLA wanted women to be covered up, Priyanka Vadra had said that women were free to wear what they want including a bikini.

As always Bharatiya media was available at hand to provide cover fire for Congress. The Economic Times termed the despicable and regressive views of the MLA as ‘controversial’. This hardly comes as a surprise considering the fact that the media has always acted as a hand-maiden of the Congress party.

It was Zameer Ahmed who facilitated the MLC ticket for a goon-billionaire turned politician Yusuf Shariff aka ‘Scrap Babu’. Although Shariff claims that his wealth has been amassed through legal means, his detractors claim he stole gold from govt. owned KGF (Kolar Gold Fields), and looted money using muscle power. Shariff had also had numerous run-ins with central crime branch authorities. Ahmed is also a close associate of former Karnataka chief minister Siddaramaiah.