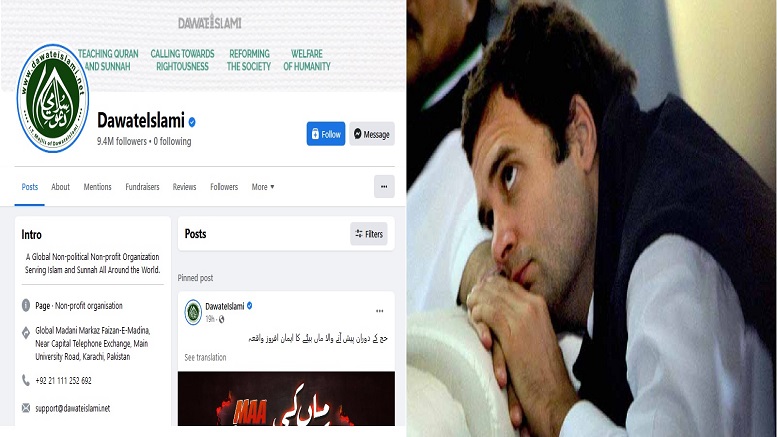 Congress-led Chhattisgarh government’s plans to allot government land to Pakistan-based Dawat-e-Islami were scuttled after local BJP leaders opposed any such moves. BJP MLA from Chattisgarh’s capital Raipur, Brijmohan Agrawal had stated in a press conference that CM Bhupesh Baghel’s government is preparing to provide 10 hectares (~25 acres) of land to the radical Islamist organization based out of Karachi to build a ‘community building’ in Raipur.

Brijmohan said that Dawat-e-Islami is a terrorist organization that actively provides funds for terrorists. There were cases of direct involvement in terrorist activities and conversion to Islam is rampant at the institution, he added.

He further said that there are many such institutions whose applications are pending for 10 years, but suspiciously land allotment for this institution that applied in 2020 is being fast-tracked. The government published advertisements that sought 10 hectares of land for the Dawat-e-Islami ‘community center’. Brijmohan challenged Congress CM Bhupesh Baghel’s government to inform the citizens where Dawat-e-Islami is headquartered.

Sub-Divisional Magistrate (SDM) Devendra Patel said that on behalf of Dawat-e-Islami, someone called Syed Kalim had applied for the allotment of 10 hectares of land in Boriyakhurd, right in the heart of the city. After the government published the advertisement, Kalim appeared in the Tehsildar’s court and withdrew his application saying that he had ‘mistakenly’ written the area as 10 hectares. They actually needed only 10 thousand square feet of land.

For the ‘error’ in the publication of the advertisement, notice was issued to the officer-in-charge of land allotment and an additional tehsildar. The Tehsildar Court rejected the application. In response, the SDM issued a press release stating that the application for this land has been canceled.

A clarification was issued by the district administration that said that no land is being given to Dawat-e-Islami. An alert response and Hindu resistance proved too strong for the ‘secular’ government to handle.

Parliamentary Secretary and Congress MLA Vikas Upadhyay called it a ‘completely baseless allegation’, but the conspiracy behind the whole deal points to the opposite. The application submitted on December 28 was approved by the Minister of forest, transport and housing, Mohammad Akbar on the same day. It was allotted the very next day, December 29 by Raipur DM.

Dawat-e-Islami is a Sunni Islamic extremist outfit based in Pakistan that operates multiple institutes all over the world. Established in 1981 by Maulana Abu Bilal Muhammad Ilyas Attar Qadri (a former a perfume-selling merchant from the ethnic Gujarati community) at Karachi, they claim to engage in Islamic studies and indulge in social work. Its name means an invitation (Da’wah or Dawat) to Islam. The Chhattisgarh-based Dawat-e-Islami organization’s social media pages have posts of Karachi-based leaders and emblems of Pakistani organizations.

The organization draws its ideological views from the teachings of the eighteenth century Sunni revivalist, Ahmad Raza Khan Barelvi (1856 – 1921) from the north Indian town of Bareilly, in Uttar Pradesh. Ahmad Raza Khan headed a powerful religious movement known as Ahle Sunnat wal Jamat, popularly referred to as Barelvi, which wanted to remove ‘corruptions and deviations’ (read as Hindu influences, or much touted Ganga-Jamuni tehzeeb) among Muslims by recommending Sunnah (traditions of the Prophet of Islam), recitation of devotional poetry such as naat, and expressing deep reverence for sufi saints.

Dawat-e-Islami became one of the main proponents of Barelvi ideology in Pakistan.

The organization encountered opposition on some theological points from another famous north Indian school of Islam, Madrassah Deoband. Most Pakistani terrorist outfits, including the Taliban, associate themselves with the Deobandi faction of Sunni Islam. But the Barelvis, often mistaken for being “moderate Sufis” in Western & Indian liberal circles, are fast becoming the new face of Islamic extremism in Pakistan. DI and associated Barelvi groups it has spawned like the militant Sunni Tehreek (ST) have a pathologic obsession with ‘blasphemy’.

Ali Hassan, a young Pakistani terrorist who stabbed two persons in an attack outside the Paris office of the French magazine Charlie Hebdo in September 2020 was highly influenced and followed the Dawat-e-Islami. The immigrant’s father who still lives in Pakistan told the media that his son has “done a great job” and he is “very happy” about the attack.

This is not the first time that Congress has been accused of promoting this radical Islamist group in Bharat.

In 2019, Congress MLA Prasad Abbayya was seen helping Dawat-e-Islami hold a religious congregation or ‘ijtema’ in Hubballi (Hubli), Karnatana. Interestingly, Dawat-e-Islami’s activities in Bharat were even opposed by local Muslim groups in Hubballi and earlier in Hyderabad, who were afraid that it would spread radicalization. Prasad Abbayya had also sought help and votes from the radical Social Democratic Party of India (the political wing of terror-linked Islamist group Popular Front of India, i.e. PFI) during the Karnataka assembly elections.