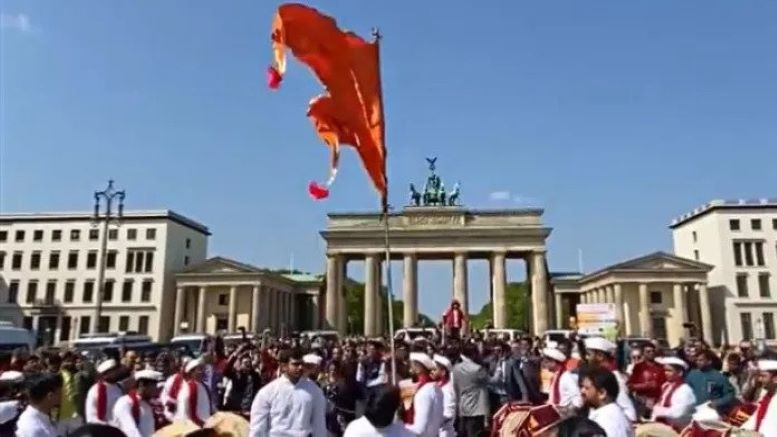 PM Modi was welcomed with the Bhagwa (saffron) flag and Dhol-Tasha by the Marathi diaspora at Berlin’s Brandenburg Gate in Germany. The PMO (Primeminister’s Office) Twitter handle shared a clip of one of the performers waving the Bhagwa flag associated with Chhatrapati Shivaji Maharaj.

Hindudveshi (Hindumisic) Congress members and the left-liberal cabal went into a frenzy at the sight of the Bhagwa flag. They saw this as an opportunity to target PM Modi and Hindutva but were left with eggs on their face as their ignorance was called out by Twitteratis.

The PMO’s tweet faced a barrage of criticism from Congress, left-liberals, and others who wanted to know why the ‘Bhagwa’ and not the national flag was used on this occasion. The comments section was filled with vile remarks regarding the Bhagwa.

Congress spokesperson Shama Mohammed questioned, “whose flag is that?” She was aptly schooled by users who highlighted that the flag had been used by the Marathi Mitra group as part of its Dhol-Tasha performance. This is an integral part of Marathi culture and is part of several celebrations in the state. Not just Mohammed but several others also spewed venom like so-called historian Irfan Habib (Tweet archived) and Congress leader Ragini Nayak (Archived Tweet) among others.

“In the video, one can see the Indian diaspora in Germany dancing traditional Maharashtrian dance steps while waving the saffron swallowtail with a V-shape flag. The ceremonial Maratha flag is Bhagwa (saffron) and has a golden jaripatta (border). Chhatrapati Shivaji Maharaj had founded the Maratha empire and coined the term Hindavi Swarajya, the independence from the Mughal and Islamic sultanates”, highlighted OpIndia.

It is a matter of great shame that the Congress, which shares power in Maharashtra along with the NCP and now secularized Shiv Sena, doesn’t know the symbol of the Maratha Empire. Saffron has great significance in Hindu Dharma too. However, it is futile to expect the anti-Hindu Congress to respect the sentiments of the majority community. Neither the party nor its cronies can look beyond ‘fascist Hindutva’ and hence they resorted to equating the saffron flag with ‘RSS supremacism’.

“Dhol-Tasha is a traditional art of playing percussion instruments to rhythmic taals, invoking the spirit of courage and valor. The drum-beating style was a practice among the Maratha troops and owes its evolution to the Peshwa times. The central figure of Dhol-Tasha is unfurling the Bhagwa Dhwaj or the Jaripatka (two-tail saffron flag with a golden border) which was the official flag of the Maratha Empire founded by Chhatrapati Shivaji Maharaj. The waiving of the flag is choreographed to the tunes played by the drummers who gather around it in a circle”, explained OpIndia.

The mindset and the deep-seated hatred for Hindus among the Congress members, left-liberals, journalists, and Dravidianists were on display as they attempted to turn this into a tricolor vs saffron contest. The same set of people had cheered on Khalistanis indulging in vandalism during the Republic Day celebrations. Justifying the replacement of the tricolor they said, “the tricolor was not removed, but only the sacred Khalsa flag was hoisted at its place”.

As rightly pointed out by OpIndia, “there have been instances when apolitical Hindus living normal lives outside India, have been cancelled after being branded as RSS/BJP stooges in the West. With the online lynch mob on a Maharashtrian Dhol-Tasha presentation, the Indian ‘secularists’ have contributed to the growing Hinduphobia in the west in their own no-so-subtle manner”.

At a time when Hindus at home are faced with increasing Islamist attacks, members of the cabal are targeting NRIs for celebrating their culture and wearing it with pride. The RSS/BJP are only red herrings, Hindu Dharma and Hindus are the real targets.