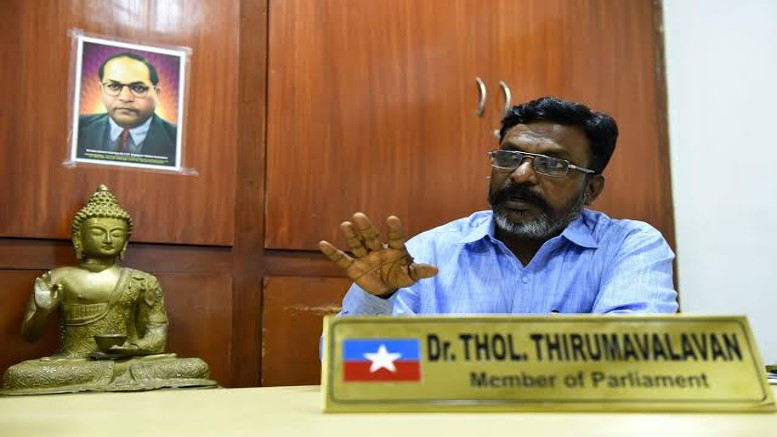 DMK ally VCK’s chief and Chidambaram MP Thol.Thirumavalavan faced the heat for lying that Brahmins gobble up all the 50.5% Open Category seats in central government institutions. The MP faced both criticism and ridicule for repeating the lie that only Brahmins benefit from Open Category and that he still needs to depend on it for propaganda.

Thirumavalavan is a rabid Hindu and Brahmin hater. He had organised a conference with his ally DMK to “Uproot Sanata Dharma” in the past. Even though he often parrots the “Brahmins snatch Dalits’ rights” line, this time he went overboard by claiming that all the 50.5% of unreserved seats in the Open Category are taken up by Brahmins.

In the video doing rounds in social media he can be seen lecturing a group of youngsters. He says, “The supreme court has put a ceiling on the percentage of reservation. The percentage of reserved seats shouldn’t cross 50%. The central government gives 15% for SC and 7.5% for ST respectively and a total 22.5% goes for the SC, ST communities. 27% of the seats go to OBCs. Total 49.5% which doesn’t breach the 50% ceiling.”

“The remaining 50.5%..all of it is taken by FCs.. how are they affected then? Where does the victimisation come from? The total 50.5% of seats is taken by FCs which means Brahmins. They are enjoying the benefits of reservation without protesting, getting beaten by police, demanding an amendment in the constitution, without going to jail. They are enjoying more than 50% reservation without any struggle..no harms at all..no beatings, jail, protest..no risk taken..and yet they are bringing 10% quota for the economically weak..”

In his eagerness to demonise the EWS quota and get the youngsters to protest against it, he has lied through his teeth about the Open Category. The seats under Open Category can be accessed by anyone including those from OBC, SC and ST if they have merit. In fact, it was revealed from the report filed by justice AK Rajan, recently appointed by the DMK government to study the “ill effects of NEET” that more than 70% of medical seats went to OBC community.

The seats “snatched” by the FC community was a mere 2.5-7% and the ones that went to Brahmin kids would have been less than 1%. Another thing to be noted here is that the distribution of medical seats follows the TN model of reservation with 69% seats reserved for OBC, SC and ST communities. The case would be similar for any central government institution as well. Yet Thirumavalavan intentionally lied to stir the emotions of the impressionable minds and sow hatred.

While it is the intermediary castes that lorded over and marginalised SC, ST communities, they demonised Brahmins to keep the blame away. A crisis of agrarian and land feudalism was diverted as a religious issue by attacking Brahmins, the religious face of Hindu dharma. Yet, Thirumavalavan, like many others who claim themselves to be the champions of the SC, ST cause, continues to target Brahmins instead of questioning the monopoly of OBCs.

Many who saw the video may have thought that the MP was simply ignorant. But Thirumavalavan is a Phd scholar and is regarded as a ‘dalit intellectual’. This incident is yet another proof of how Dravidianists thrive on Brahmin hatred that is kept alive generation after generation through a carefully fabricated propaganda full of lies.