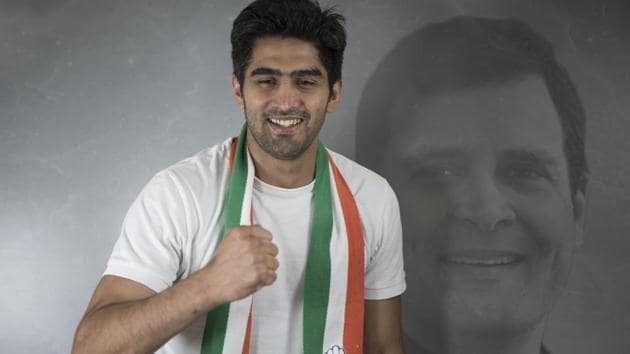 Secular-liberals with Hindu names often have a high opinion of themselves and imagine that their role is to ‘educate’ ordinary Hindus and show them ‘the path of reason’. While they won’t admit it, their sermonizing is restricted to Hindus alone, because they know that minorities attach zero importance to their words and would rather listen to the neighborhood maulvi/pastor.

Olympic medal winning boxer Vijender Singh contested the last Lok Sabha elections on a Congress ticket, and so it is no surprise to see him mouth secular inanities from time to time.

In a recent tweet, Singh said “I have heard Ram, Krishna, Allah, Nanak, Buddha, Mahavir, Jesus are one, but some people are trying to divide them.” While this may appear on the surface to be an innocuous appeal for religious harmony directed at all, as we said before, HINOs (Hindu In Name Only) know their target audience is Hindus and only Hindus. As it is, the profound Dharmic idea of Sarva Dharma Sambhava (different Dharmic paths lead to the same divine self-realization, hence are equal) has been distorted by dishonest Lutyens’ intellectuals to justify supremacist, exclusivist Abrahamic ideologies.

Vijender’s tweet came after the latest attack on a Hindu festival procession, this time on Hanuman Jayanti in Jahangirpuri, Delhi and other parts of the nation. He is apportioning the blame equally on all, deliberately glossing over the fact that the police FIR over the Jahangirpuri violence clearly states that the Hanuman Jayanti yatra was proceeding peacefully, when suddenly Islamists started stone-pelting after picking up a quarrel with those towards the end of the procession that had almost completely passed by a mosque.

Even though he was covering up for the Islamists who have attacked Hindu festivals in a pre-planned manner, yet he committed sacrilege in the eyes of Muslim fanatics! Why? Because he had put Allah on the same pedestal as Gods/revered saints of other religions!

This is how one Zafar Saifii, a verified twitter user whose bio says, “Freelancer. Seeker of knowledge. Bibliophile. Aspiring author.” replied to Vijender, saying, “Ram, Krishna, Nanak, Buddha, Mahavir, Jesus are all CREATION, whereas Allah is the CREATOR. You should gain some knowledge, bro. None of these are equal to Allah.”

This is how the HINOs are treated by Islamists – with utter contempt, while Hindus and other Dharmiks try to reason with these secular charlatans. Secularism is truly the last resort of the scoundrel in Bharat. These delusional, conceited frauds take the high moral ground while lecturing and trying to ‘reform’ Hindu Dharma at every possible opportunity, while the non-Hindu communities who are desperately in need of lessons of harmonious co-existence are ignored by them.

This virtual slap to Vijender’s secularist drivel reminds one of the way Ramchandra Guha was slammed by Muslim commentators and fellow secular-liberal HINOs when he dared, for once, to say some truths about Muslim fundamentalism and intransigence.

Vijender and his ilk think that ordinary people are blind to the fact that almost every act of communal violence in this country involves Muslim extremists. No one ever hears of Jains, Parsis, Sikhs, or Hindu sampradayas like Shaivites, Vaishnavites, Lingayats, Arya Samajis, Sarna clashing with each other over religious processions and festival celebrations.

It is Islamic supremacism, the idea that Allah is the Greatest, the only true God worthy of worship, that all others are inferior to him, and especially Hindu deities, that is at the heart of the communal violence problem in Bharat. Christian evangelists also hold a similar supremacist idea about Jesus being the ‘only son of God’ and deities/revered teachers of other religions being ‘false gods’, and unsurprisingly they also are involved in violent insurgencies hand-in-glove with Maoists. In essence, it is Abrahamic supremacism that is the issue, yet HINOs direct their sermons at Hindus.