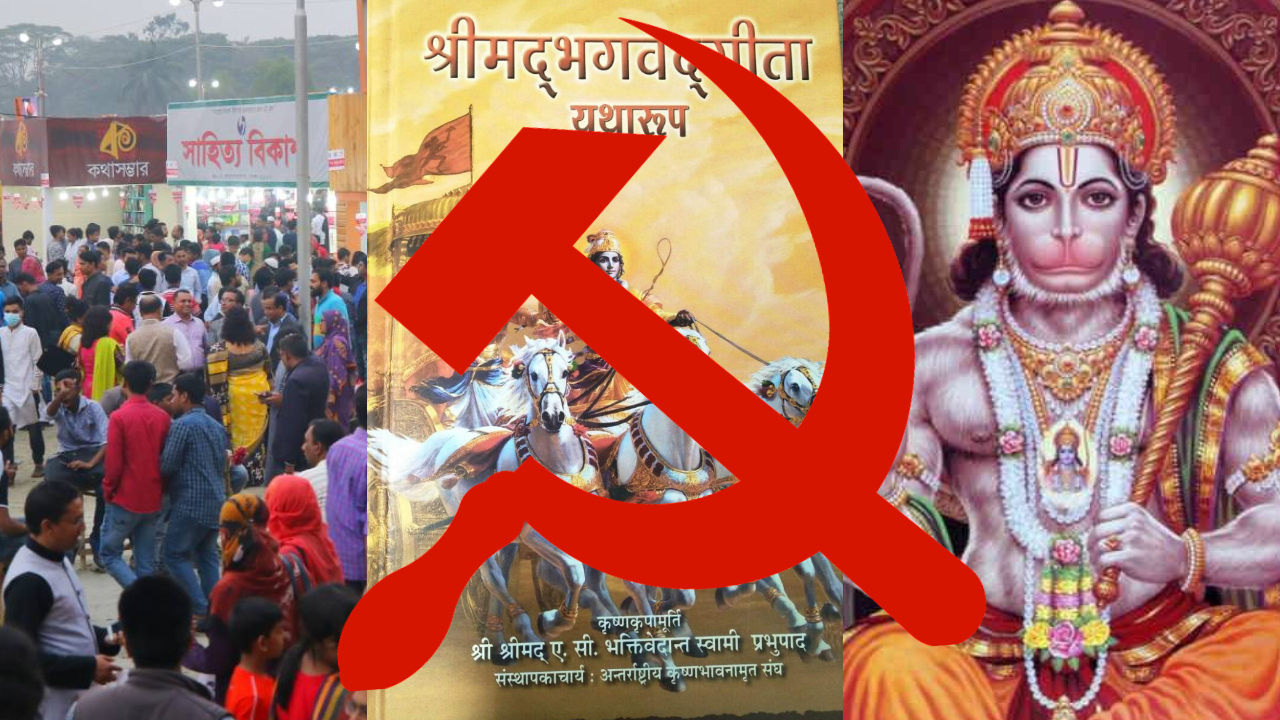 The famous Kolkata Book Fair that has been turning more far-Left every year, completely descended into rabid anti-Hinduism during its 44th event held from ‎29th January – 9th February 2020, at Central Park Mela Ground, Salt Lake. The degeneracy reached its peak when leftists goons stepped on the Bhagavad Gita and Kolkata Police ordered VHP to shut down their stall and stop distributing copies of the Hanuman Chalisa.

Radical leftist students & goons used the Book Fair as a breeding ground for their anti-CAA shenanigans since Day 1 of the fair. On Saturday, when BJP leader Rahul Sinha entered the book fair, the students escalated the situation. Their sloganeering against the Citizenship Amendment Act and the National Register of Citizens became louder and more provocative, but Sinha held his composure and stayed calm.

The leftist mob then barged into the BJP-VHP stalls and carried out a violent rampage. Several BJP-VHP activists were manhandled and numerous books were destroyed. One of the vandals was also found to be trampling the Srimad Bhagavad Gita under his feet.

In response to the anti-CAA shenanigans by leftists, ABVP initiated a peaceful rally to express their support for the CAA and NRC. Strangely, the police intervened and stopped this peaceful rally.

One Madhumita Ghatak, a BJP supporter, lashed out at the communist goons for the utter disrespect shown towards Hindu religious scriptures and called out the state government for its inaction and incapability in curtailing leftist goondaism.

On Sunday, the last day of the Book Fair, the city police revealed the bias they are forced to operate with under TMC rule. Kolkata Police prevented VHP workers from distributing the Hanuman Chalisa, claiming it could “incite passion among the visitors leading to law and order problem”. Incidentally, leftist students from Kolkata University were again seen chanting anti-CAA, anti-NRC slogans outside the VHP stall.

VHP activists questioned the cops about why they couldn’t distribute Hanuman Chalisa when other stalls were distributing Quran and Bible.

VHP member Swarup Chatterjee told PTI, “There was tension initially. But when we wanted to know why the Hanuman Chalisa cannot be distributed if other organisations can give out the Quran and the Bible, the police relented, and we continued with the distribution.”

Faced with strong arguments from the VHP members, the Kolkata police, having no real response, allowed them to reopen the stall and carry on with the activity of sharing the Holy Hanuman Chalisa with visitors.