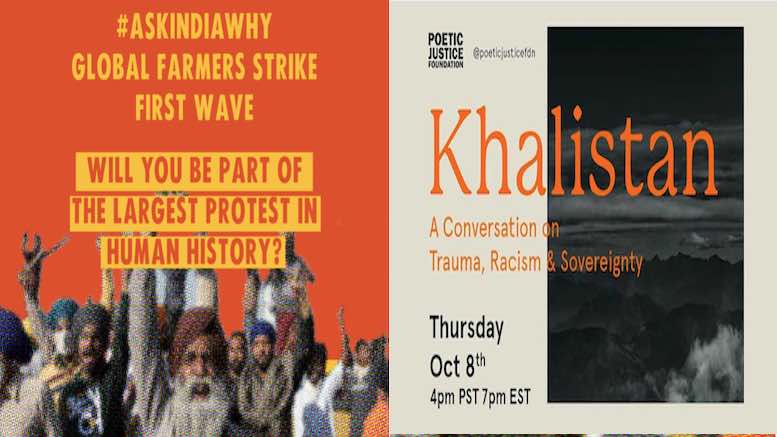 A ‘toolkit’ designed for supporters of the ongoing ‘farmers protest’ in Bharat, inadvertently tweeted by celebrity teenager activist Greta Thunberg, is a goldmine for those keen on understanding how various anti-Bharat interests operate.

Much has already been written about the toolkit, such as here and here. In this article, we will focus on 5 key learnings that the toolkit provides:

A Khalistani flavour to the protests was evident to anyone who has been observing the happenings on ground – death chants for the PM, boasts that Modi would meet the same fate as Indira, photos of Bhindranwale, talk about capturing Red Fort etc. But the toolkit removes any doubt that Khalistanis lie at the heart of these protests, and have effectively hijacked any genuine misapprehensions farmers may have.

One of the key organisations behind creating the toolkit and associated sites like AskIndiaWhy is Canada-based Poetic Justice Foundation (PJF), an openly Khalistani group which meticulously strategised and executed the digital protest campaign culminating in the violence of 26 Jan and the hoisting of the Sikh flag at Red Fort. Pro-Khalistani Canadian MP Jagmeet Singh is close to PJF.

The website AskIndiaWhy built by PJF talks about Sikhs as a “sovereign people….resisting dispossession in their homeland,” demand right to self-determination, calls the farm laws “continued discrimination by the Indian government against Sikhs and Punjab since pre-Partition in 1947”, and claims Punjab suffers from “state-induced poverty”.

Take a look at a SWOT (Strength, Weakness, Opportunity, Threat) analysis conducted by Poetic Justice Foundation about these protests – 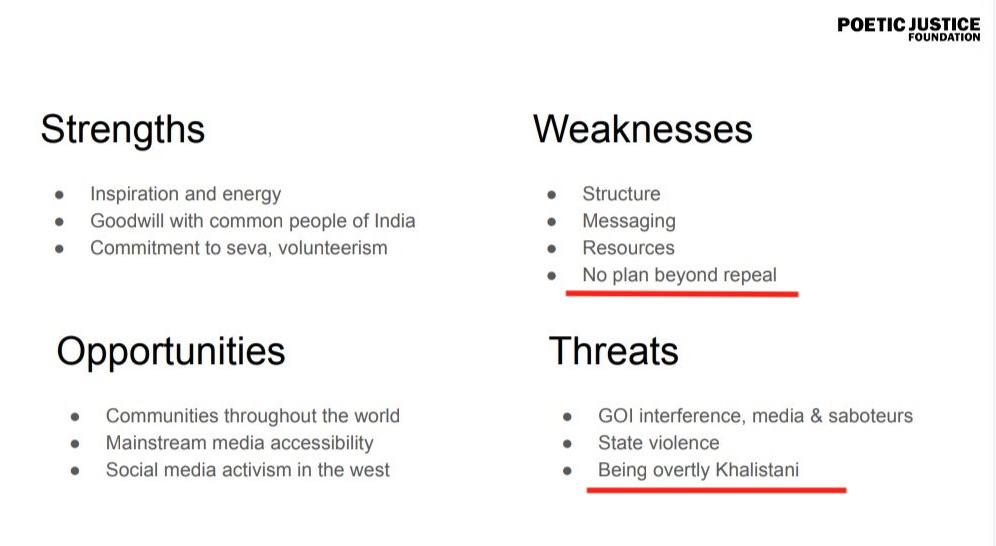 ‘Being overtly Khalistani’ is listed as a threat! And ‘No plan beyond repeal’ is the weakness which tells us that for these activists, it was never about the farm laws at all.

Poetic Justice Foundation also believes that these protests are a ‘battle in a larger war’, and one of their objectives is to disrupt the “yoga and chai” image of India!

The truth is that Punjab farmers are the most subsidised, blessed with almost 99% irrigation against an all-India figure of little less than half, and richer compared to farmers from other states. But for hate-filled, supremacist separatists, facts hardly matter.

2.) Not just Khalistan, these protests represent every #BreakingIndia cause

While Khalistanis are leading the charge and have latched on to these protests as the vehicle to implement the long-cherished Referendum2020 project envisaged by the US-based banned body Sikhs For Justice (SFJ), they are working with every conceivable #BreakingIndia force.

Sample some of the suggested tweets in the toolkit –

“Why is India militarising, terrorising and colonising Kashmir?”, “

Why is India killing its Dalits & Bahujans (why are they seen as “lower” castes)?

Why is India not listening to the demands of the 250 million odd protesters?

Why is India killing its tribals and pastoralists?

Why does India ignore and encourage class and caste-based violence?

Look at the list of ‘oppressed’ peoples: Kashmiris, Muslims, Dalits/Bahujan, tribals – exactly the same demographics that anti-Hindu political forces within Bharat and outside regularly rant about. The keyword ‘caste’ also features prominently in the toolkit, the favourite hobby horse to bash Bharat and Hindus with.

Let there be no doubt – it is anti-Hindu bigotry that unites all these groups. At the heart is the hate for Hindu Dharma, our religion & culture, especially murti-puja (termed ‘idol/image worship’) and associated rituals (labelled ‘meaningless). The ‘caste discrimination’ used to demonise Hindu society is frequently practised by members of these same anti-Hindu groups, who also practise the worst form of discrimination and supremacism – that of condemning and dehumanising the non-believer, i.e. people of other faiths such as Hindus (which includes animists, tribals etc).

In fact, Bharat is the only country in the world where affirmative action in favour of minorities and under-privileged classes has now been taken to such an extreme that it is the majority (read general category Hindus) who are legally discriminated against!

3.) Left-secular-liberal front in Bharat is hand-in glove with these external enemies

On the ground in Bharat, we have been urban naxals and communist leaders like Yogendra Yadav, Darshan Pal get involved, and demands made at the farmers protest sites to free those jailed for planning and executing rioting in Delhi and Bhim Koregaon.

Further, the toolkit material contains links to Scroll and The Wire articles, and quotes K​aushik Basu’s assessment of the new laws as ‘detrimental to farmers and beneficiary to corporations’.

Activism today has become a much-abused word. Powerful behind-the-scene puppeteers have mastered the art of manipulating public sentiment using emotive causes related to justice, environment, equity, human rights etc, for their own ulterior agendas. Youth and the rising middle class are at risk of being swept up in glib talk of ‘global citizenship’, ‘humanity beyond borders’ etc, and made to act contrary to their own interests.

Sample some of the dizzying catch-phrases, popularised by the Global Left, which have been used cunningly by Khalistani and other #BreakingIndia actors to cast a wide net of ‘activism’ and strike a chord with a global audience who don’t have the time to get into the nitty-gritty of the new laws:

Given Modi and RSS-BJP’s pattern of authoritarian and fascist rule in favour of India’s corporate class, continued human rights violations at the expense of minority groups, the Farmers Protests underlie a larger human rights issue that the world needs to pay attention to. The same civil liberties and democracies that were at risk when Modi’s American counterpart, Donald Trump, was in office, remain threatened in India.

…capitalistic and exploitive Black Laws will further undermine and devastate India’s small and marginalized farm-holder….Farm Bills: A Corporate Feast In The Garb Of Reform….handing over agriculture and market to the big corporates…Govt has a pro- corporate intent…ultimately benefit Ambani and Adani, two of India’s super-rich, pandemic-profiting billionaires.

The slogans don’t have to make sense, as long as they sound intelligent and moralistic. Once you have a critical mass propagating nonsense (doesn’t matter if the initial spark was lit by likes of Rihanna and Mia Khalifa who wouldn’t even know what MSP stands for), then you have the ‘”If many believe so, it is so” effect.

This new-age phenomenon of mindless activism has given us the ironic sight of a so-called child rights activist like Malala Yousafzai who refuses to speak about the abduction, rape and conversion of minor Hindu & Christian girls in her home country, or the environment activist Greta Thunberg who is campaigning against farm laws which offer a way out of destructive cropping patterns behind stubble burning and a depleted water table!

Moreover, the hatred for the Ambani-Adani duo is a dead giveaway to the real motivation at work – deep-rooted hatred for Hindus, and in particular Gujaratis (most hated as both Narendra Modi and Amit Shah belong to that state). It is instructive that other big corporates like Tata, Godrej, Birla are not reviled by the Bharat-haters although they too are into contract farming or agro-processing businesses.

More ways to participate (from 21st-26th February, 2021) A. #StandWithFarmers Solidarity Video – Record a video (preferably in landscape mode) to share your message of support to protesting farmers.

This is a carefully co-ordinated and strategic campaign. Expect more waves and iterations of the same. If not farm laws, some other issue will be used to hit us again, and again.

The way the anti-CAA and now anti-farm laws campaigns have been run on a global scale, indicate that this problem is only going to get worse. The global left-liberal order has been emboldened with Biden coming to power in USA, and there should be no doubt in anyone’s mind that anti-Bharat elements ensconced in the Western world will use every measure at their disposal to destabilise us. Global liberal oligarchs like George Soros will not rest unless their ideology is imposed across the world. Big tech has already made clear where its loyalties lie.

Bharat has managed to drastically cut down on terror attacks which were the norm during UPA, but this new danger is more abstract and deadly as it attacks from within. The Khalistani campaign masked as ‘farmers protest’ was definitely well-organised, but not very high-tech as this tweet asserts. We need to up our electronic intelligence tracking apparatus and impose heavy costs on those using our freedoms to undermine us.

The need for strong law and I&B ministries was never greater, and the incumbent ministers fail to inspire confidence. The government should also consider having a national digital security team as information warfare is going to be a key challenge of the 21st century.

Note: Anyone keen on a deeper study of the toolkit can refer to this tweet thread, or download the now-restricted documents/templates from here and here