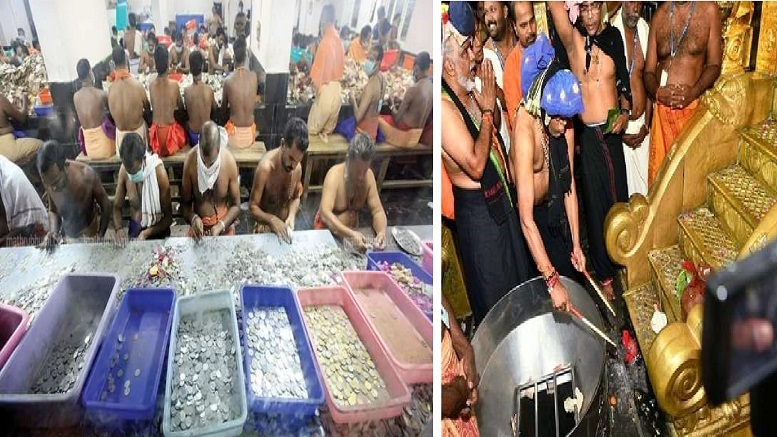 Even as the two-month-long Sabarimala temple darshan season came to an end, a teller was caught stealing currencies from the Sabarimala temple collections. He was employed by the Travancore Devaswom Board (TDB) and is the second one to be caught red-handed this season. Local courts displayed great anger but conveniently shifted the blame onto the anti-Hindu atheist communist government and accused it of negligence.

On January 8 a clerk engaged in counting the Bhandaram (Hundi) collections stole Rs 3,500.  He was arrested, a case was registered under sections related to theft by a clerk, produced before the court, and sent to judicial custody.

Last Wednesday, judges PG Ajithkumar and Anil K Narendran repeated what they had said on December 21, 2021. They remarked that Sabarimala should have a ‘strong officer’ to prevent such crimes in the future. Their remarks came just a few days before the end of the season even as the real brains behind such thefts appear to have already filled their coffers.

Earlier, on December 16, 2021, another TDB employee named Sankaranarayana Panickar who was engaged in counting currency was also found stealing money from the Sabarimala Hundi. A search of his room resulted in the recovery of Rs 42,470 from a bag and he was arrested and charged with theft and breach of trust.

The misappropriation was discovered by honest Hindu TDB employees who noticed the size difference in the notes prepared to be deposited at Dhanalakshmi Bank. According to the Vigilance report, the incident was a conspiracy between the treasury employees and the bank employees. Corrupt officials blamed the counting machine adding that the notes had become greasy from the ghee that is used in rituals! No one else was arrested.

The high court’s directions back then were for a ‘constant vigil’ of the entire activity at Sabarimala Sannidhanam to prevent any theft of money and other offerings. They added that stringent action should be initiated against such thieves.

The court ordered the TDB to inform the special commissioner at Sabarimala about such thefts. The commissioner was also instructed to bring such incidents of thievery to their notice by filing reports in the High Court.

Praising themselves, the court even said that the latest theft was registered only because they passed some orders! “During the hearing of the matter, the bench was told that an FIR has already been registered in connection with the latest incident and the errant TDB employee is in judicial custody,” the bench added.

Pilferage is so widespread an issue at Sabarimala counting centers that employees are not allowed to wear undergarments. Due to the greed of a few Hindus in Name Only (HINO) atheists, all the employees are degraded and subjected to physical examinations.

Employees have time and again requested the government to install advanced checking gadgets like body scanners and x-ray units but it has been allegedly delayed mentioning technicality and cost. Around 200 employees are engaged by the TDB each year to count the cash.

Tip of the iceberg

What we now see is just the tip of the iceberg. Back in 2019, it was found that 40 kilos of gold and 100 kilos of silver stored in the temple strongroom were missing. An ‘audit’ was conducted by the same corrupt officials and their communist masters and as expected no discrepancies were found.

As usual, they blamed the bureaucracy and said that a senior retired officer forgot to brief his successor about the details. This happened 6 years after his retirement and the communists said that since he did not hand over the duty and the report assessing the wealth inside the strongroom, they withheld the officer’s retirement benefits.

An independent audit should bring up quite a few skeletons out of the closet. Back then, ultra-leftist paid news media firms including Newsclick and Newsminute worked hard and whitewashed that crime. Since nothing was ‘missing,’ the courts asked the government to settle the police officer’s benefits. Suspiciously, nobody enquired as to how or why the TDB remained silent for those 6 years.

On January 14 devotees thronged to the Sabarimala temple to get a glimpse of the auspicious Mandala Makaravilakku Jyothi.  They were not disappointed when at dusk the Jyothi shone thrice, deep inside the reserve forest. Gratified pilgrims in their thousands prayed to Bhagwan Ayyappa and descended the temple.

The two-month-long temple season, which began on November 16 with Covid protocols, will end this Wednesday. Around 20 lakh devotees had pre-booked their visit and unofficial reports confirmed that total Hundi collections have crossed over Rs 120 crore. The same atheist Devaswom minister who refused to bow before Ayyappa and used the holy water offered to him as hand sanitizer encouraged more pilgrims to come.

The Sabarimala temple is the biggest revenue earner for the TDB and yet greedy HINOs indulge in money thefts. It must be mentioned that most of them are affiliated with the communist party union leaders and are regular visitors to the AKG center.