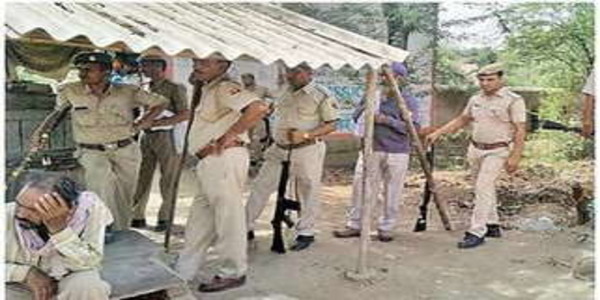 Reports are coming from Milakpur village about violence that took off due to marrying off a Sikh girl after converting her religion to Islam. Situation got tensed when the two groups indulged in stone pelting and firing. Seven people including three women were injured. All of them were provided medical aid in Ramgarh CHC. CHC incharge Dr. Piyush Tiwari has accepted that the injury to women looks like due to firing. However, police has denied any exchange of fire. According to him injury is due to stone pelting. Soon after the incident, QRT was deployed and a flag march was organised along with the police in the village.

A girl from Raisikh family was converted into Islam and was married off to a man from Milakpur by Fakaruddin, a lawyer. This created a rage among Sikh community of the area. Many discussions and meetings were going on among the Sikhs since past few days regarding this tensed situation. On Monday, one community opened fire and pelted stones on another community in the village. Milakpur resident Santok Singh informed the police that after discussing about Nikah incident, people were going from Gurudwara to a condolence meeting in the village. Soon after Hanif, Taiyab, Islam, Jumma, Khursa, Leela, Ibra Khan, Daood, Rujdar, Saahid, Taahir, Saahil, Noormal, Jakru and Shibbu started pelting stones and opened fire on the people of Sikh community. This injured many people. According the Dr. Tiwari, members from Sikh community were brought for medical aid.

“Police team has been deployed in the village. Currently peace is prevailing in the area. One community has reported firing and stone pelting by the other community. FIR has been lodged and investigation is going on.”, said Anil Beniwal, DCP South.

Bar Association has lodged a complained against lawyer Fakaruddin in Bar Council of Rajasthan. The members have told that Fakaruddin has converted the religion of girl Baljit Kaur, daughter of Samnam Singh and arranged her Nikah with a man from Milakpur village. However, family of the girl had already filed a ‘Missing’ report of her. Villagers have also accused police of not taking strong action as the accused are of special community and not arresting the accused despite lodging the complaint.