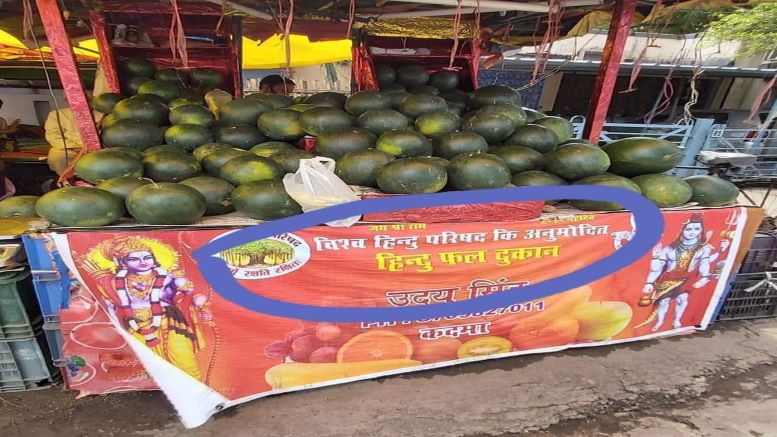 According to the statement issued by one of the fruit seller to Swarajya Magazine these banners and posters had been put up about a week ago. However, it has now emerged that Jharkhand police took cognisance of a Twitter complaint and registered a case under section 107 of Criminal Procedure Code (CRPC) besides having these banners and pictures removed.

Targeting Hindus has become a routine affair in states ruled by ‘secular’ parties who find ‘Hindu shop’ objectionable but are absolutely fine with shops that proudly announce ‘Muslim’ and ‘Halal’ (product approved by Islamic authorities who hand out paid certificates).

Under which section and under what law am I prohibited to mention Hindu shop Jamshedpur Police?

I have seen so many places with "Islamic Khanawal" in MH as well.

Secularism is being conveniently used as a weapon to target Hindus and appease minorities. As National Spokesperson for VHP Vinod Bansal pointed out, secularism in Bharat is used to attack Hindus who proudly put up banners saying ‘Hindus’ in their shops or use saffron (Bhagwa) flags while Muslims are allowed to get away with wearing their religion on their sleeves. Sri Bansal also shared photo of a complaint of ‘spreading communal disord’ lodged in Nalanda district of Bihar by a Government official against Hindu activists who were putting up saffron flags on fruit & vegetable shops.

However, Twitter users have begun questioning this unfair treatment meted out to poor vendors only because they are Hindus.

OPPRESSION. Oppression of Hindus is now the default setting of Indian system. Which legal mandate does Halal certification follow? Halal is meant to be produced by Muslims for consumption of Muslims. Certification is done by Jamat Halal trust. But one cant write Hindu shop! https://t.co/2yo6dokOSy

If this attack on poor Hindu vendors wasn’t bad enough, the ‘secular’ Jharkhand government has gone a step further to appease radical Muslim groups by transferring four senior police officers for exposing those protecting illegal Bangladeshi-Rohingyas. As per reports, four DSPs of the Special Branch (Intelligence department) including Jitendra Kumar, posted in Lohardaga, have been transferred due to objections on one of their reports raised by Anjuman Islamia. The ADG of the department, RK Mallik, has issued an order in this regard.

Jitendra Kumar’s report, which has created a stir in the state, relates to 13 residents from different parts of Lohardaga giving protection to illegal Bangladeshi-Rohingyas Muslims. Kumar had submitted this report to ADG of Special Branch. Citing that the leaked report intends to create ‘communal disharmony’ and ‘defames upstanding citizens’, Anjuman Islamia wrote a letter to Lohardaga DGP demanding a high level probe. The report was caught in the political storm and one senior politician even interfered in the matter after which the DSPs were transferred.

While on the one hand poor Hindus are targeted, on the other the secular state seems to be bending over backwards to appease minorities.