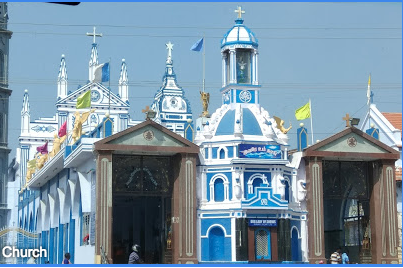 The TN government, reacting to the shrill criticism from political parties and NGOs, has announced a compensation of Rs. ten Lakhs for those killed in police firing during the anti-Sterlite protests in Tuticorin, and also decided to constitute a Judicial Commission of Enquiry.

Hence this compilation becomes exceedingly important because this violence, like the violence in Jammu and Kashmir, is intended to provoke the army and police into taking resolute action which will then be used for further propaganda against them. Targeting police and army is the first step towards causing tremendous political instability, chaos and anarchy.

The role of ‘Our Lady of Snows Basilica’ church in Tuticorin

“Announcements were made by priests in a few churches in the coastal villages of the district on Saturday morning appealing to the “devotees to join the satyagraha on Sunday”. (The Hindu, page 11, Sunday, September 9, Protestors plan to lay siege to Kudankulam site today)

“In Tuticorin a crowd gathered in front of Our Lady of Snows basilica and blocked vehicular traffic. The agitators forcibly took away four police personnel including two women to marriage hall at Periyathaalai and released them in the evening”. (The Hindu, Tuesday September 11, Anti-nuclear protest turns violent)

6. “Innocent” fisher-folks, including fist-waving, leap-frogging, belligerent fisher-women had spread out fishing nets on the sands of Idinthakarai and Kudankulam beach to trap policemen on duty and drag them into the ocean.

Attacking policemen, molesting police women on duty, burning police vehicles and police stations, and making the entire police force the chosen targets for violence has become the trademark of violence across the country and particularly in Tamil Nadu.

7. And where Church ‘activists’ go, Naxals aren’t far behind –

“All the 11 persons arrested by the police at Nanguneri in Tirunelveli district on Friday were remanded to judicial custody till Monday. As the police suspected that the 11-member team, posing as a ‘fact-finding committee’ and heading towards anti-Kudankulam Nuclear Power Project protest hub Idinthakarai, might have links with the banned outfits of Andhra Pradesh, Odisha and Jharkhand, they were arrested. (The Hindu, October 14, Detained activists remanded to judicial custody)

“Leaders of various political parties opposed to the Kudankulam Nuclear Power Project (KKNPP) will gherao the Fort St. George on October 29 in support of four Charter of Demands, including closure of the plant.

Talking to reporters, Manithaneya Makkal Katchi MLA MH Jawahirullah (founder of terror group Al-ummah) said that people against the KKNPP were expressing their opposition in a peaceful manner and the government sought to suppress them with the aid of police.

“Police has invoked Sec. 144 in Idinthakarai and neighbouring villages and the entire area looked like a graveyard. It should be immediately withdrawn”, he said.

“Members from various outfits staged demonstrations and road blockades in different locations here on Tuesday in support of the anti-nuke agitators in Kudankulam on Monday.

The Naam Tamilar Iyakkam leader Seeman and his followers were arrested in front of the Railway Junction here, when they attempted to block a train. They shouted slogans against the police for “unleashing violence” against the demonstrators, who were condemning the nuclear project in a democratic manner.

“Even at this stage of filling fuel in the nuclear reactors, the governments can intervene and stop the KKNPP from going critical,” the speakers said.

The Pattali Makkal Katchi president G.K. Mani and his party men staged a demonstration on Scott Road here in the forenoon. They condemned the “unilateral action” of the governments in establishing the KKNPP despite protests from people from different sectors.

The Viduthalai Chiruthai Katchi functionaries also staged a demonstration near Kattabomman statue in Periyar bus stand against the attacks on the anti-nuke protestors in Kudankulam.

The members from Madurai-Ramnad Diocese took out a march holding candles from East Gate to St. Mary’s Church in the evening.

The students from Law College came to the road near the district court area in support of the KKNPP demonstrators. They shouted slogans to drop forthwith the establishment of the nuclear power plant.

“Tension had been mounting in the area after about 4,000 anti-KNPP protesters under the banner of ‘People’s Movement Against Nuclear Energy (PMANE) led by S P Udayakumar, moved out of the Church premises from Idinthakarai coastal hamlet, 3 km north of Kudankulam, to the beach some 500 metres behind the N-plant, since Sunday afternoon.

10. Within hours of the violence in Tuticorin, a mob in Idinthakarai consisting largely of Christian fisherfolk went on the rampage – same modus operandi.

Announcing compensation of several lakhs of rupees to families of those killed in police firing sends very wrong signals to the same violent mob – that if violence is extreme and there is large scale burning of public property and police stations and government offices, where the police is forced to open fire, then a weak-kneed government will announce compensation.

This causes anger among ordinary law abiding citizens, who struggle to keep their families fed and educated through honest work, besides demoralising the police.