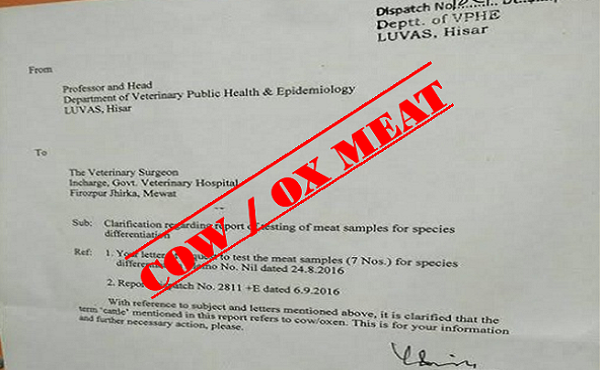 Finally, after months of confusion over Biryani samples collected from Mewat (Nuh) last year around Eid in August, that if they contained beef i.e. cow / ox meat, the Lala Lajpat Rai University of Veterinary and Animal Sciences (LUVAS) has released a clarification that all samples of Biryani indeed contained cow / ox meat! In the previous report in September 2016, the university report had just mentioned that the biryani samples contained ‘cattle’ meat, and it was mentioned that further action be taken by ‘Veterinary Surgeon’ of Animal Husbandry department.

Naresh Kadyan, the Chairman of PFA Haryana and Master Trainer of AWBIA, had filed an FIR few months back accusing that some government officials are delaying the investigation and not issuing clarity on reports in Mewat biryani case. He says he tracked the case because of which the university has finally released a clarification through a new report which mentions that biryanis from Mewat contained cow / ox meat. Naresh Kadyan has also filed an FIR against the biryani traders for violation of law.

We contacted the Head of Haryana Gau Sewa Aayog, Sh. Bhaniram Mangla and he said :

‘We have been facing a court case against procedural and other actions regarding the sample taking of biryanis in Mewat. That’s why we have been going slow over this issue, just waiting waiting for court order to ease the things. There are various challenges and paper work in the same. Anyway, the action is to be taken by police.’

On the other hand, Sh. Naresh Kadyan says :

‘The court didn’t give any stay order on the proceedings anyway. There was / is no point of going slow on the case. The fact is that cattle smuggling and slaughtering, specially of cow and bulls is rampant.’

Naresh Kadyan has also said that the otherwise stringent Haryana Gauvansh Sanrakshan & Gausamvardhan Act, 2015 has loopholes and certain contradictions, like allowing for cow / bull slaughtering for ‘medicinal’ purposes etc. Here is the letter written by him in this regard to various authorities : 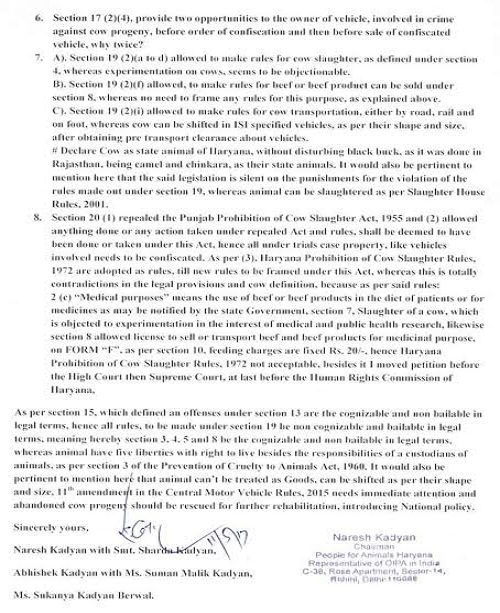 There needs to be a debate on mainstream media channels that how such basic ethos of our constitution, i.e. a Directive Principle regarding cattle protection has not yet seen a central / national-level legislation and implementation. That the reports such as these get buried for fear of secular harmony, and not enacted upon for a long duration of time.