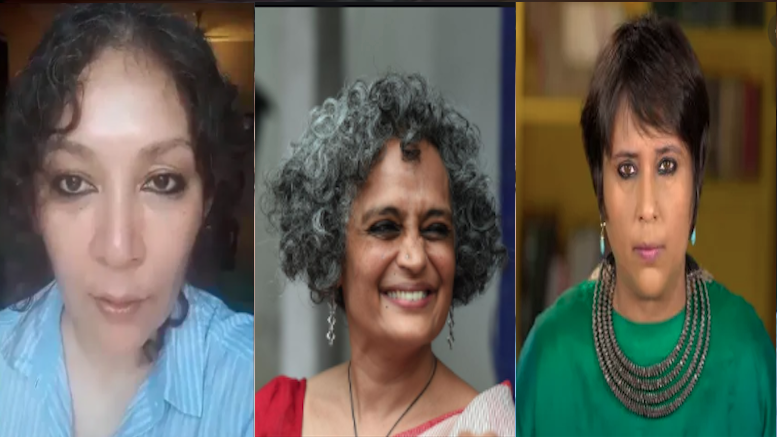 I came across some news articles and tweets this week about the judicial custody of the chargesheeted conspirator of Delhi riots, Safoora Zargar. She along with Meeran Haider have been charged with sedition, possessing arms, murder, attempt to murder, inciting enmity and violence and more. However, Aljazeera, an anti-Bharat portal gave it a headline ‘…Pregnant woman sent to jail’.[1] Gulfnews and a Left-newspaper The Guardian have termed it as witch-hunting and Safoora Zargar and Meeran Haider as ‘innocent’ Muslim students and ‘peaceful’ protesters against CAA. [2, 3]

The Left-liberal (a self-declared term though an oxymoron) eco-system in the country bombarded twitter with tweets which highlighted how a pregnant Muslim woman has been arrested during lock-down and the month of Ramadan for peacefully protesting against CAA. National Coordinator of Congress Party, Hasiba Amin wrote on this, ‘research scholar from JMI in second trimester of pregnancy arrested’. Vijaita Singh, a journalist from The Hindu, declared her innocent as she tweeted, ‘Her crime- organised peaceful anti-CAA protests.’ Saba Naqvi, a journalist called her a ‘pregnant woman student’ who is in jail now.

Yes, only a woman can be pregnant and secondly, no law stops a ‘student’ or a ‘woman’ or a ‘pregnant woman’ to be arrested if grievous charges of murder of more than 50 persons and rioting are levelled against her. If being a woman student and her pregnancy were no issues while she allegedly became a part of the conspiracy of riots, playing victimhood card for the perpetrators of a grievous crime must stop. Vijaita Singh and others must read the chargesheet filed by Delhi Police to understand the ‘crime’ she is charged with.

This is how the left-liberal propaganda machinery works – preparing a background for an issue, like opposition of CAA on half-baked truths; creating false narratives like CAA is anti-Muslim; then legitimising it through mainstream and social media and using some known faces as mouthpieces and play victim-hood if caught. Politically-decimated yet active in media and academia, it thrives on known fault-lines of this country- religion, ethnicity, caste etc. It incites an apparently disgruntled section and creates unrest in the society.

This is what exactly happened when this echo-system sensed an opportunity in CAA to use the old fault-line, the Hindu-Muslim divide. Shaheen Bagh model of protest and rioting in Delhi was experimented with the support of Islamic fundamentalists. As the well-planned conspiracy of Delhi riots, which killed 53 persons and created mayhem for three days in the end of February 2020, is getting unfolded and arrests are being made, the echo-system has become super-active in playing victim-hood card. Fascism, pogrom, genocide, witch-hunting and Islamophobia are their darling terms as police and judiciary is at work. In the case of Safoora, being a ‘Muslim pregnant woman’ is a perfect combination for them for creating an emotional narrative.

A few days back the hate-Bharat brigade had discovered in Sharjeel Imam a meritorious ‘research scholar’ who had got admission in IIT and JNU. Sharjeel is the same person who was booked under UAPA for sedition and inciting violence through his comments to cut-off North-east from rest of Bharat.

The hearts of left-liberals ever bleed for rioters, terrorists, Maoists and all anti-Bharat people who work against the unity of the country. Yakub Memon, a deadly terrorist, the mastermind of 1993 Mumbai serial attacks which had killed more than 250 innocent people and left thousands injured, was executed after appropriate judicial process. However, hearts of liberals went out for Memon and his family. The same way, they could not control their emotions after judicial hanging of Afzal Guru, the mastermind of the attack on Bharat’s Parliament. The slogan-raisers of “Afzal hum sharminda hain, tere qatil abhi zinda hain” and “Tum kitne Afzal maroge, har ghar se Afzal niklega” at JNU on 9th Feb. 2016 became their darlings.[5]

When Burhan Wani, the area commander of Hizbul Mujahideen, a proscribed terrorist organisation under Prevention of Terrorism Act, 2002 died in an encounter, Barkha Dutt, then a journalist with NDTV, saw in him the “son of school headmaster who used social media as a weapon of war’’.[6] Propaganda digital platform The Quint found in him “a cricket fan, a class topper”, romanticising his image as a poster-boy, a “Kashmiri youth icon.” [7]

The propaganda of Bharat-haters thrives either on lies or on manipulation of facts. A few days ago another propagandist, one-book wonder Arundhati Roy vented her hatred for Bharat in an interview to a German media network, DW News by making a mischievous claim that ‘situation in India is approaching genocidal’. She compared Government of Bharat with Nazis. However, her Bharat-bashing outburst is as divorced from reality as were her half-truths in the case of Gujarat riots[8] as she conveniently hid the trigger for the riots, the killing of 59 Hindu pilgrims (including 25 women, 25 children and 9 men) at Godhra railway station.[9]

The modus operandi during anti-CAA protesting and Delhi rioting has been to inject communally divisive venom in Muslims, incite them for violence and then providing a shield through intellectual and legal support. All those persons, who lied to innocent people about CAA or NRC and incited them for violence or were active participants in the conspiracy of riots or its execution, are liable to be dealt with sternly as per legal provisions. No emotional narratives, no half truths, no pack of lies must influence judicial action.

-By Prerna Malhotra (she teaches at Ram Lal Anand College, University of Delhi and writes on contemporary issues)