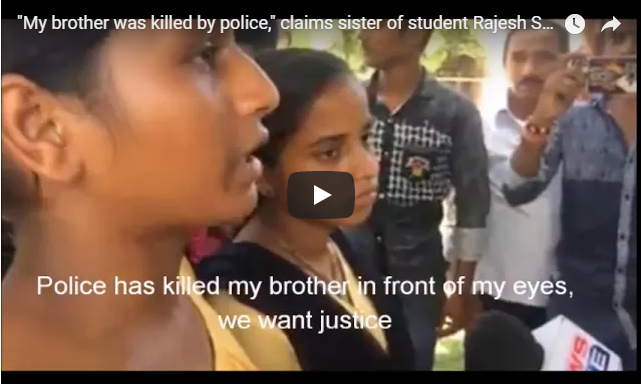 In a dramatic development in the Daribhit High School case where two students – Rajesh Sarkar and Tapas Barman – were shot dead allegedly by West Bengal police, the sister of deceased Rajesh Sarkar has claimed that her brother was ‘shot dead in front of my eyes by police’.

The student protests had broken out in Daribhit (Darivit) High School located in Islampur, Uttar (North) Dinajpur district after appointment of 2 Urdu teachers, overruling the students’ stand that they had no need for Urdu teachers and instead wanted the school to fill up posts of Mathematics, Physics and Biology teachers lying vacant for months.

Media outlets like The Week have reported that Rajesh Sarkar and Tapas Barman were both studying in a technical college in North Dinajpur, and were pass outs of the same school – Daribhit High School – where students were protesting on September 20.

HinduPost has received videos from human rights activist Prasun Maitra about the incident, including Rajesh Sarkar’s sister (herself a student of Daribhit High School) describing how she and other girl students were lathi-charged, man-handled and abused by police, and when her brother came to save her, he was shot in front of her eyes.

Meanwhile, WB Police has taken to twitter to deny these allegations and claimed instead that the 2 persons killed were ‘outsiders’ who did not die in police firing. They have blamed the violence on an ‘unruly mob…armed with deadly weapons’.

The Week has reported that Rajesh and Tapas were ABVP members (ABVP is the RSS student body), but this could not be independently corroborated by HinduPost. The rest of the English-language media is also fast making this a BJP-TMC tussle, overlooking the fact that 2 youth have died allegedly due to a trigger-happy West Bengal police that is otherwise seen ducking for cover when attacked by Islamist mobs as seen in Kaliachak, Malda and numerous other incidents.

When an FTII Director was appointed against student wishes, or JNU student leaders arrested for organizing pro-separatist events, the entire mainstream media and intellectual class of the country was up in arms decrying the ‘fascist Modi government’. But now, when two young students have been shot dead in cold blood, no one has as yet bothered to question CM Mamata Banerjee on this alleged barbarity by her state police force.

On the contrary, the West Bengal CM, currently on an official tour to Europe, has brushed aside all demands for an independent enquiry and blamed RSS/BJP for bringing ‘goons from outside who opened fire on the students.’ She has also issued instructions to her administration to take ‘stern action’ against the BJP call for Bengal bandh on 26 Sept.

Sources tell HinduPost that police is allegedly harassing & threatening Hindus in Islampur to implicate them in false cases tagging them as RSS/BJP activists. This is not the first instance of West Bengal police and administration cracking down on Hindu students – last year, several students of Tehatta High School in Howrah district were injured when police lathi-charged them as they were celebrating Saraswati Puja in defiance of Islamist diktats that Saraswati Puja could not be celebrated till Nabi Diwas (celebration of Prophet of Islam’s birthday) too was held in the school.

The parents of the two victims have demanded a CBI probe and refused to cremate their bodies until then. “We have no faith in the police. The post-mortem was done at midnight. We demand a CBI investigation. The body may have to be examined again,” Rajesh’s father Nilkamal Sarkar said. The mother, Jharna, said “the police shot (her son) dead.”

Villagers have buried the two bodies and are keeping watch over the graves so that the bodies are not taken out and cremated.