The parable of Emperor has new clothes, with an Indian twist 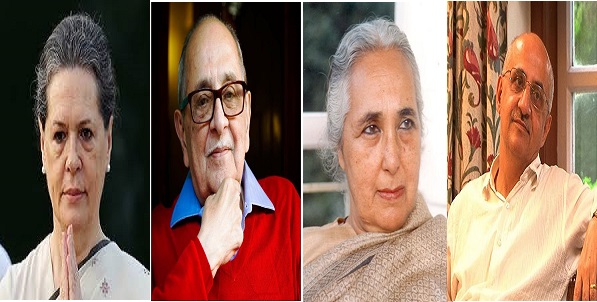 As the NDA completes three years in power, many issues have come up which have tended to make the nation stronger, and a realization in the world that Bharat can indeed be the Vishwa Guru.  The supposed elite of Lutyens’ Delhi (also called Delhi Darbaris) have been forced to react to these issues.  Since these were opposite to the ideas that they were propagating, which they thought the people had accepted, this reaction has often shown unhinged minds.

We are reproducing an article in response to one written by the late Dileep Padgaonkar.  We hope you agree with us that it is relevant today.

One of the parables of Hans Christian Anderson relates to the story of an emperor who was so fond of new clothes, that he spent much of the state resources on expanding his wardrobe.  And he spent a lot of time in this hobby of his, rather than statecraft.

One day a couple of swindlers came to the Emperor’s capital city, and let it be known that they can weave a fabric so light that it is visible only to those who are fit for the office that they hold or one who is not unusually stupid.  Obviously the Emperor desired to have this magnificent fabric, since it would also enable him to weed out incompetent and stupid people from among those serving the state.

The swindlers asked for some of the finest thread as well as a lot of money.  They set themselves up in a spacious studio with a large loom, and pretended to make the cloth.  The Emperor sent his best ministers to give him a progress report.  They heard a lot of the noise of the loom operating, but no sign of any cloth.  But since they were told that the cloth was visible only to the competent and the clever, they reported that the work was progressing rather well.  And every time the observers came, the swindlers asked for more money.

The swindlers explained to the observers the pattern, the colours, etc., which the observers faithfully reported to the Emperor.  Finally, the day came when the swindlers announced that the fabric was complete and now the fit out had to be done.  They went to measure the Emperor, and a few days later came holding what they said were the new clothes.  And everyone gasped at the beauty and the style, and loudly proclaimed their admiration.

The Emperor saw nothing.  But how could he say so and announce that he himself is incompetent and stupid?  So he went along with the charade spelt out by the swindlers, who asked him to go out on a parade and show his subjects his new clothes.  The Emperor agreed, and as he set out to make the preparation, the two swindlers quietly slipped out of town taking all the fine threads and money with them.

When the Emperor set out from his palace, the people in the town lined up the path since they wanted to see the magnificent fabric that they heard about.  They too could not see anything, because there was nothing to see.  But no one wished to be seen as either incompetent or stupid, and they all exclaimed the imagined beauty of the Emperor’s new clothes.

Until one little boy said, “But the Emperor has no clothes!”  And the whole imaginary edifice collapsed.

So where is the Indian twist to this tale?  Read the following article by Dileep Padgaonkar:

Dear Sentinels of the Republic,

We goofed. Every assumption we made during the election campaign has been savaged. Each one was premised on the values we cherish — freedom, justice and fraternity. Yet all that we did to promote them was to create fear in the minds of voters: fear of Hindu nationalists gaining control of levers of the state. It prompted us to clutch at the slenderest straw in the wind. That compounded our discomfiture.

We assumed, for example, that while Congress was fated to pay dearly for its follies, its tally of seats would allow it to be at least a bit player in the formation of the next government. That didn’t happen. We also reckoned that BJP-led NDA would fail to reach the halfway mark. This would compel it to rope in ‘secular’ non-Congress, non-Left regional parties to take a shot at governance. The latter, we took for granted, would extract their pound of flesh: deny Narendra Modi any role in the new dispensation.

Towards this goal we added our two-penny bit. We missed no chance to harp on Modi’s RSS background. Time and again we raked up the 2002 violence in Gujarat. We pooh-poohed the ‘clean chit’ the Supreme Court-appointed Special Investigation Team and a lower court in Ahmedabad had given Modi. We picked gaping holes in his much-vaunted development model. And when this was not enough to corner BJP’s prime ministerial candidate, we latched on to Snoopgate. On all these counts, we came a cropper.

Congress suffered its worst rout in history. So did the Left parties. Caste-based formations that wore secularism on their sleeves were flattened too. On the other hand, BJP got what it wanted: a 272+ outcome. No non-Congress party had secured a majority on its own since the first general elections in 1952. Add to this the seats gained by BJP’s pre-poll allies. That placed NDA in an invincible position.

So why did we lose the plot? The plain answer is that we misread the nation’s mood. We didn’t gauge the depth and sweep of the rage against UPA. The dread possibility of ‘communal’ forces coming to power, we believed, would override all other concerns of the electorate, including the lacklustre leadership of the UPA government and of Rahul Gandhi, Congress’s undeclared mascot. We drew a blank.

An equally miserable failure of ours was to underestimate the spell Modi cast on the electorate. Armed with a high-tech media blitz, he led an intensive, spirited campaign built around his personality. He tapped into voters’ dismay and frustration over the ineptitude and shenanigans of the Manmohan Singh dispensation. He pinned responsibility on the Gandhi family’s dynastic rule. He also tapped into voters’ yearning for a leader endowed with the will and aptitude to bring prosperity to the people, ensure clean and effective governance, provide security and instil national pride in citizens.

We made light of all this. The so-called Modi wave, we argued, was the handiwork of media that had been bought over by India Inc. Poll results showed how hopelessly we were off the mark: education, jobs, sound civic services and good governance mattered more to voters than narratives of victimhood replete with populist promises.

We still try to comfort ourselves with the thought that almost seven out of 10 voters didn’t cast their lot with BJP. Comfort can’t get colder than this. What we need is to acknowledge the flaws in our idea of secularism. Correctly or otherwise, it has been perceived as a hostile attitude to even the most uplifting traditions of India’s myriad religious and spiritual traditions. And, by that token, it has been equated with an indulgent attitude to Muslim extremism. A course correction is in order.

We also need to renounce our animus against economic reforms and modernisation of our armed forces. At the same time, we must not lower our vigil to ensure that casteist, communal, sexist, hyper-nationalist and regional chauvinist forces of all shades do not threaten the fundamental rights of citizens. These rights are the foundation on which rests the edifice of our Republic. And we remain its steadfast sentinels.

The article appeared in The Times of India on May 30, 2014, with the title ‘A missive to distraught liberals’.  It is available at:  http://blogs.timesofindia.indiatimes.com/talking-terms/a-missive-to-distraught-liberals/

And like the Emperor’s ministers, many people in Bharat and abroad internalised the imagery the sentinels created.  The swindlers in Bharat, under the guise of being sentinels, spelt out their fabric in terms of imaginary ideas of secularism and pluralism.  They said that they had these wonderful plans which would eliminate poverty, and make the people, especially the religious minorities, secure in the nation.  And they grandly called it The Idea of India.

A large number of people in Bharat knew that the sentinels were projecting an invisible idea, and one which was holding the nation back.  But the sentinels were carefully guarding the means of the flow of information – the media, the book publications, etc.

Until along came the internet.

The people found out that they could communicate with each other, bypassing the censorship of the sentinels.  And in the process they reached out to some in the circle guarded by the sentinels, who did not have the courage to speak out, and were terrorised into believing what the sentinels told them.  The few who did, before the internet came, were thrown out of the circle into an intellectual wilderness, to serve as an example to others who wished to ask questions.

The little boys have spoken.  Let us hope that the sentinels realize that their swindle has been seen through, since the fabric they were weaving was actually non-existent.