While the entire liberal community in Bharat was swooning over Pakistan PM Imran Khan’s ‘peace gesture’ of announcing release of Prisoner of War Wing Commander Abhinandan (something which every country that is a signatory to the Geneva convention is required to do), Pakistan showed its true colors by releasing a shocking 2 min propaganda video of the IAF pilot, before he was released last night at the Wagah border.

While Pakistan had already violated Geneva Conventions when its information ministry tweeted and later deleted a video of the captured pilot on Wednesday, it fell even lower with a video released last night that shows WC Abhinandan saying things like –

“Pakistani Army saved me…Pakistani Army is very professional, I see peace in it” (if anything shows this statement was coerced under duress, this is it)

“Indian media exaggerates, they hype & spice up small issues to provoke & mislead people” (this is to bolster the pro-Pak lobby in Bharat which too wants people to believe that it is a few TV channels creating ‘war hysteria’ otherwise everything is fine between the two countries)

The video was tweeted from the official Govt. of Pakistan handle, but has now been deleted While the reality of what Wing Commander Abhinandan underwent will only be known after he is debriefed, one thing is clear – Pakistan has again mis-calculated by releasing a video which they thought would paint Bharat and certain sections of its media (Republic TV is especially hated, both in Pakistan and by liberals of Bharat) as war-mongers.

It is the sort of propaganda video usually released by terror organizations like ISIS who force captured enemy combatants to condemn their own countries.

Saner voices in Pakistan too realized that whatever narrative Pakistan was trying to build to con the world into thinking that it is interested in peace while Bharat is not, has been completely destroyed by releasing this video – 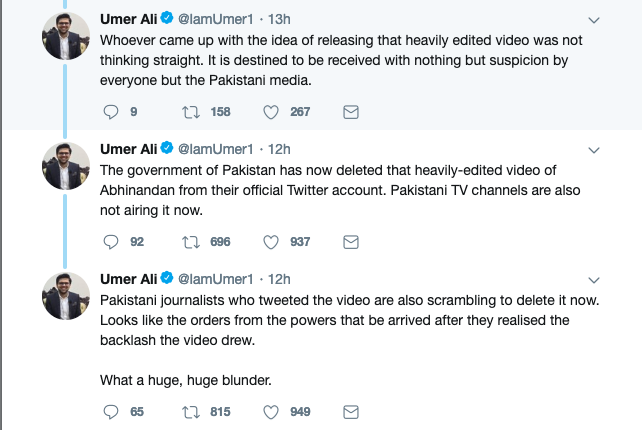 But, even this or the nuclear sabre-rattling & threats of Ghazwa-e-Hind by Pakistani ministers on their TV channels have not made the tiniest different to Indian left-liberals who are still cheering Imran Khan for his ‘statesmanship’ and loudly proclaiming that Pakistan has won the ‘perception battle’ with Bharat.