While cricket lovers in Bharat were trying to move on from the comprehensive defeat by Pakistan in last night’s Champions Trophy final, a much more disturbing trend was reported from all corners of the country –  that of major celebrations through cracker bursting in Muslim majority localities.

As per Amar Ujala newspaper, the fire crackers started going off in Muslim localities of Aligarh adjacent to AMU (Aligarh Muslim University) as soon as Pakistan had posted a huge score of 338. The celebrations got louder as Bharat kept losing wickets in the run chase. Anticipating trouble, RAF and PAC forces were deployed and flag march conducted in Muslim areas like Uperkot, Delhi Gate, Turkman Gate, Babri Mandi, Pathan Mohalla etc.

But this issue was NOT restricted to communally sensitive Western UP where Aligarh falls. As per accounts on social media from ordinary citizens, such celebrations were observed in Bengaluru, Dehradun, Noida, Faridabad, Ghaziabad, Hyderabad, Mumbai (in Kurla – a predominantly Muslim neighbourhood), Ramnad district in Tamil Nadu, Nagpur, Pune (Kondhwa & PCMC Pradhikaran), Ahmedabad (Gujarat) Jaipur. Note: this is not an exhaustive list as there could be more cities/localities where such celebrations were witnessed.

Of course, some of the biggest celebrations were witnessed in Srinagar, Kashmir and this was gleefully confirmed by none other than leader of the ‘moderate’ Hurriyat faction, Mirwaiz Umar Farooq and the official handle of the Pakistani State (Army)

Many secularists were up in arms that such facts were being openly discussed and some even tried to pass it off as ‘wedding celebrations’ being mis-interpreted by ‘hyper-nationalists.’ Some users had to face a torrent of abuse and death threats for simply stating the facts on crackers being burst in Muslim areas –

Too many tweets about fireworks. What's so new about it? Been happening for decades; its just that we play less now, & lose even lesser.

Translation: “I am telling one thing straight from the heart – a majority of the Muslim community has a soft corner for the Pakistani cricket team…I agree that crackers are going on (after Pakistan’s victory)”

The liberal-secular jamaat was not satisfied with just expecting nationalists to ignore the blatant celebrations of a Pakistani win by fellow Muslim citizens – Jyoti Malhotra (Consulting Editor, Indian Express)  wanted our media to celebrate the Pakistani victory as well!

The English rag ‘Times of India’ routinely gives a platform to this same Jyoti Malhotra (Consulting Editor, Indian Express) to voice her absurd, delusional rants like ‘the PM should order the opening up of all other boundaries across the Indian sub-continent and treat the neighbours on par with the states of the Indian union.‘ Yet, she could not stomach it when TOI decided to cover Pakistan’s victory only in the sports section, and not trumpet it on the front page. Such episodes reveal the extreme hard-left, anti-national positions that intellectuals like Jyoti Malhotra hold.

The gleeful, sarcastic, Hinduphobic tone of these secular-liberals will long be remembered by every ordinary citizen of Bharat. Sample these stomach-churning tweets by this elite jet-setting set –

20 June 2017, 2 PM: As expected, there are some people who have doubted this article and are loathe to believe that ‘secular’ Bharat can witness such widespread acts of anti-nationalism. For them, we are providing some more media accounts of Muslim-dominated localities/villages celebrating Pakistan’s victory in the Champions Trophy final – 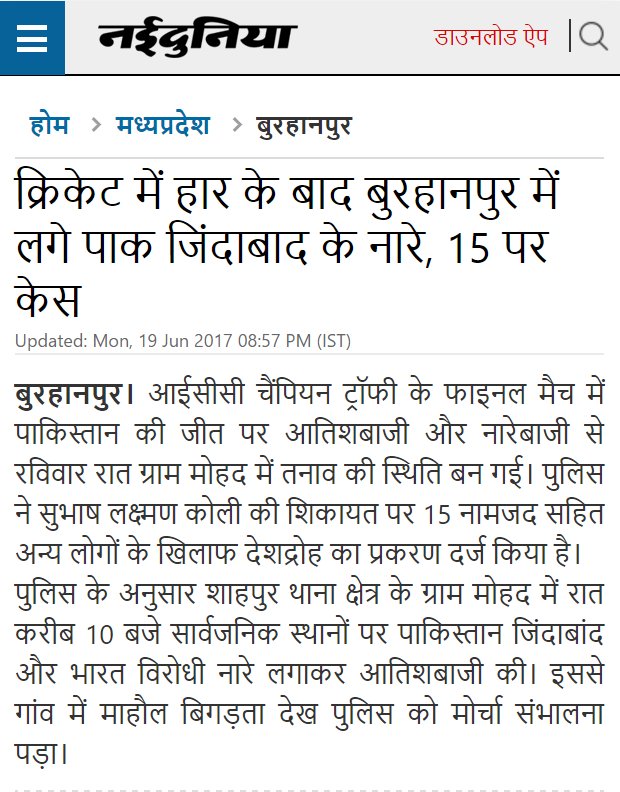 “Fifteen Muslim men who allegedly raised pro-Pakistan slogans and burst crackers in Mohad village of Madhya Pradesh’s Burhapur district after India’s defeat in the ICC Champions Trophy final on Sunday night have been charged with sedition.

The fifteen are in the age group of 20 and 35. They were arrested on Monday from the village, about 25 kilometers from the district headquarters Burhanpur, which is a communally sensitive district in Madhya Pradesh.

Investigating Officer Ramashray Yadav told The Indian Express that an offence under Section 120 B (criminal conspiracy) and Section 124 A (Sedition) has been registered against the fifteen in Shahpur Police Station. He further said Mohad is a Muslim-dominated village and a complaint was filed by a Hindu villager.

“The police would soon send a letter to the district magistrate with a request to stop government subsidies being enjoyed by the accused”, said Yadav.” 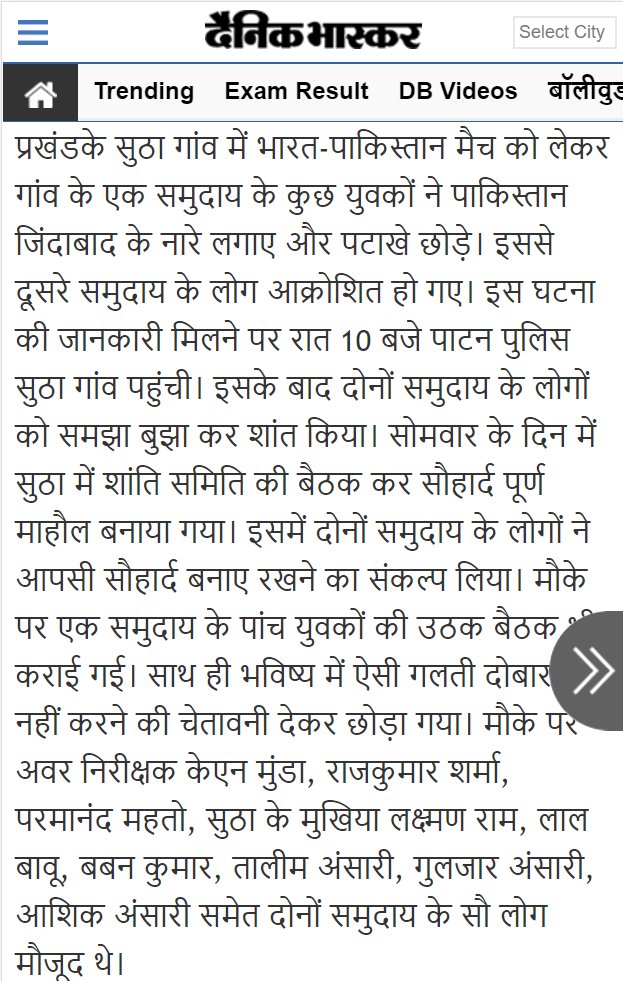