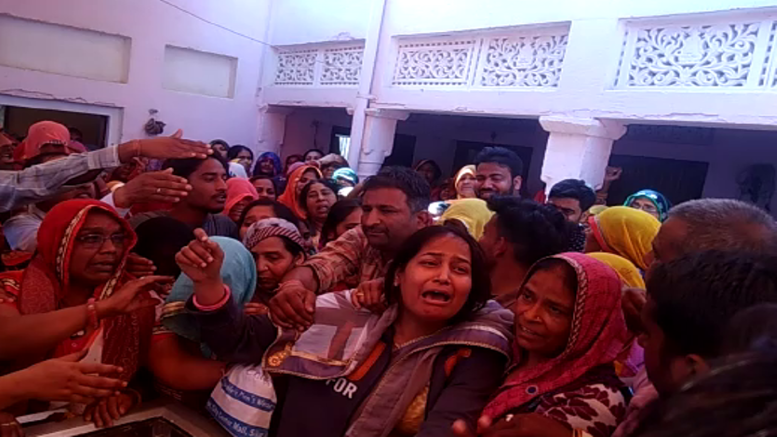 Speaking to Patrika.com martyred policeman Ratanlal’s wife shared her grief and raised pertinent questions regarding the working conditions of policemen that leaves them vulnerable to attacks by rioters.

The village of Tihawali continued to mourn the loss of its favourite son Ratanlal for the fourth day on Thursday (27th February) when Ratanlal’s wife Poonam poured her heart out. It was a regular Monday and Ratanlal left for work despite ill-health to join his boss who was alone in the field facing rioters. Poonam rues that it was the last time she saw her husband, who left home hungry at 8.30 in the morning as he was observing his usual Monday fast.

In the afternoon Poonam didn’t get any response when she called her husband on his phone which was switched off. She then got busy attending to her children who had just returned from school when a neighbour walked in and asked her if she could communicate with her husband. It is then that she switched on the television to find out the disturbing news of her husband’s death.

She was upset that the government hasn’t armed the police who have to face the rioters and was of the opinion that the police should be well-equipped to take on such vandals. She said she saw an unarmed policeman facing a rioter who was firing gunshots (lathi-wielding constable Deepak Dahiya faced down rioter Mohammed Shahrukh who pointed a pistol at him). An emotional Poonam said that even policemen have families and that should be kept in mind when they are made to face rioters. Therefore, it is essential that they be given arms while taking on anti-social elements. She was worried about her as well as her children’s future.

Poonam further said that the culprits should be brought to book and hanged to death. She said that Ratanlal was an honest cop who never did anything wrong and was always punctual and diligent in his work.

Ratanlal’s brother spoke about the martyred policeman’s special affiliation with Monday. He said that the martyr was born, entered into Delhi police service and even got married on a Monday and added that he even died on a Monday. Ratanlal would never miss his Monday fasts. Ratanlal was very fond of his moustache which he had been grooming since several years. He didn’t even remove them during our father’s death, signed off his brother.

This tragic incident again raises the importance of police reform & modernization. Our police men and women have been stereotyped as corrupt & inept by Bollywood and editorial class. But they are in fact the first & last line of defence when it comes to law & order and internal security. Liberal judges ensconced safely in well guarded court complexes often pass strictures against police for ‘human rights violations’, forgetting the almost impossible conditions our forces operate in. Foreign-funded civil society NGOs also demonize the police – for eg., the whole nation is brought to a grinding halt when a cattle smuggler is killed, but no one sheds a tear for the policemen routinely killed while tackling that dangerous mafia.

It is high time that our police forces were adequately trained and equipped, and given a free hand to operate free of ‘secular’ pressures.

Gems of Babudom: Jhabua SP suspended for abusing student who called for protection from rampaging seniors