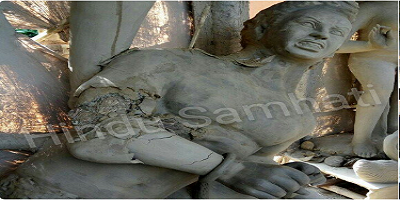 A murti of Maa Durga has been desecrated at Bagnan, Howrah in West Bengal, as per ground reports from human rights group Hindu Samhati. Shockingly, it is being said that miscreants even urinated on the deity.

Idol of Maa Durga is desecrated at Bagnan, Howrah. Miscreants urinated on the deity. Local Hindus blocking road. Tension in the area. pic.twitter.com/KPoHIeciFG

Enraged over this act, local Hindus are blocking roads in Bagnan and there is tension in the area.

Unfortunately, desecration of murtis during Durga Puja festival is a common occurence in West Bengal. Around the same time last year, Hindu Samhati had reported –

“Reports of several incidents regarding desecration of Maa Durga’s idol are coming from different areas of the State of West Bengal. In the most cases, when reported, police is apathetic to catch the perpetrators and advising the complainants (not) to disturb communal harmony.

Last night, murthis of Ganesha, Laxmi, Sarawati & Kartik were thrashed at Sodepur under Pursura PS in the district of Hooghly. Hindus in that area became very furious and they approached police to nab culprits. Surprisingly, police advised them not to make a issue of it and offered them financial assistance. Villagers strongly refused the offer and organized road-block demanding arrest of the culprits. The blockade was withdrawn later after police assured them of arresting the culprits.”

The situation is no different in neighboring Bangladesh. As this Oct 2014 article ‘The annual Durga idol desecration festival of Bangladesh’ states –

“In the People’s Republic of Bangladesh, another set of annual events centred on idols of Ma Durga start somewhat earlier than the puja itself. This is the widespread desecration and destruction of Ma Durga’s idols, always done by ‘unidentifiable group of miscreants’. The target faith community is always identifiable and predictable.

So widespread is this pre-Puja idol desecration phenomenon that one Puja organizer said in sad resignation that instead of hitting arbitrarily, idol-destroyers should pre-specify each year which puja mandaps will be targeted. Already, the pre-Puja idol-breaking campaign has picked up. There’s a good geographical spread this year — 5 in Kishoreganj district, 6 in Rishipara of Gopalpur, 3 in Joari Bajar of Natore, 4 in Garua of Faridpur, 3 in Protapnagar of Sherpur and so on. Care is taken to attack late in the idol-making process and do a thorough job so that the idol cannot be repaired or replaced.”

From stone pelting on Ganesh processions & Rath Yatras, violent protests against temple aartis during Ramzan, to desecration of Maa Durga murtis – is this the famed tolerance & harmony of ‘secular’ Bharat that our intellectuals wax eloquently about? Will they outrage over this issue like they did when a Muslim was allegedly force fed a roti during his Ramzan fast?

Or will such news, now coming to light due to advent of social media and activism of groups like Hindu Samhati, be presented as a ‘backlash’ to growing Hindu fundamentalism (the proverbial Modi effect)? Our faux liberals and psuedo-seculars are capable of all sorts of denial, distortion and fabrication to defend their politically correct assumptions.