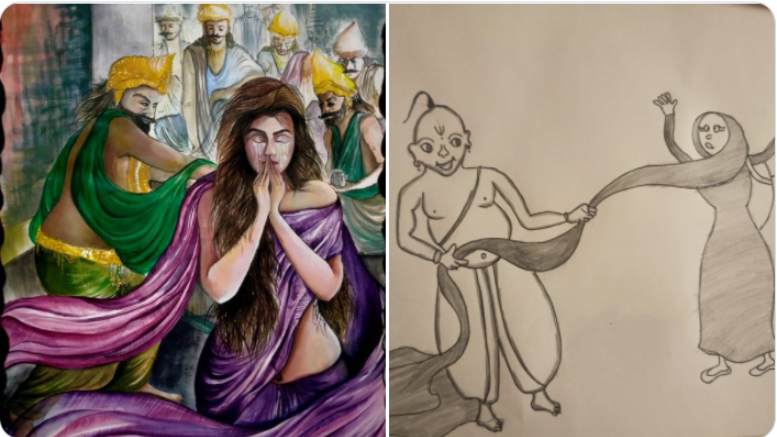 A Dravidian idealogue has compared the Muslim girls protesting for allowing hijab inside classrooms with Draupadi. He has drawn parallel between educational institutions not allowing hijab with Draupadi being disrobed by Dushasana. He has also used Bharathiyar’s poem on Draupadi’s vow to depict Brahmins as evil.

Kannabiran Ravishankar is a leading Dravidian ideologue who claims to be an investment banker and a part-time Adjunct Professor in the University of Paris specializing in Comparative Literature (Tamil). A rabid anti-Hindu and anti-Brahmin, he had shared a caricature of a Brahmin pulling at the hijab of a Muslim woman and the poem of Mahakavi Bharathiyar on Draupadi’s vow.

Panchali Sabatham, a literary work of Mahakavi Bharathiyar is based on the incident from Mahabharat of Draupadi being disrobed by Kauravas after which she vows to tie her hair only after avenging her disgrace. Dr. Ravishankar who goes by the name @kryes on Twitter, shared the specific verse of Draupadi’s vow with a title “Panchali (Fatima)’s Vow”. Comparing it with Muslim girls being asked to remove their hijabs inside classrooms based on Karnataka governments GO, he said “both are same, dress violence (violence by removing dress)”. He had shared an illustration of a Brahmin man pulling at hijab of a burqa clad woman.

Apart from this, the Karnataka government had passed a GO banning hijab inside classrooms only after a small minority of Muslim girls (many of whom are related to PFI members) created ruckus in institutions after being incited by Islamist organisation CFI, the student wing of PFI. But the likes of Ravishankar have the audacity to compare it to the situation of Draupadi and demonise Brahmins while dissing Hindu Dharma in the same breath.

Ravishankar is a rabid anti-Hindu and anti-Brahmin, who claims to have learnt Sanskrit from a Brahmin teacher only to abuse Brahmins. In 2018, he had enacted a drama using kids in which they were taught to forcibly remove the janeu of a kid disguised as a Brahmin.

He had laid out an action plan for Dravidianists to follow in countering leaders like H.Raja who speak out boldly about the farce of Dravidianism and Periyarism. He advised them to heap lies on BJP and Sangh leaders and gave some examples, “lie about Shyama Prasad Mukherjee’s sex life and tell the story of Guruji Golwalkar having intercourse with a cow”.

He peddles lies in the worst form about Hindu deities, the height of which was claiming that saint poet Andal herself accepted in one of her poems that she was a Devadasi. He appears to have some special hate for Brahmin women and from an innocent Brahmin woman, Vishaka Hari – well-known for her spiritual discourses, to Finance Minister, Nirmala Sitaraman, he has abused many Brahmin women without provocation.

About the former Chief Secretary of TN, Girija Vaidyanathan, he tweeted “A snake will bite with no regard for time. A Pappathi (slur for Brahmin women) will strike at the right time. Pappathi > snake” meaning a Brahmin woman is worse than a snake. He tweeted it with indirect implication to EV Ramasamy’s famous quote “if you see a snake and a Brahmin together, kill the Brahmin first”.

He peddles lies in the worst form about Hindu deities, the height of which was claiming that saint poet Andal herself accepted in one her poems that she was a Devadasi. Yet he has the audacity to use a character from a Hindu Itihasa to defend Muslim girls’ demands and abuse Brahmins who are in no way connected to the issue.

This hyper rationalist and fan of secular humanism says that one should oppose dogmas of religion, apply critical thinking and develop scientific skepticism. But even a cursory glance at his writings shows that all his atheist and rationalist bigotry is directed at Hindu Dharma alone, with the globally dominant Abrahamic religions finding hardly a mention. But such fraud is par for the course for Dravidianists, which at its core is nothing but an anti-Hindu ideology masked as a social justice movement.