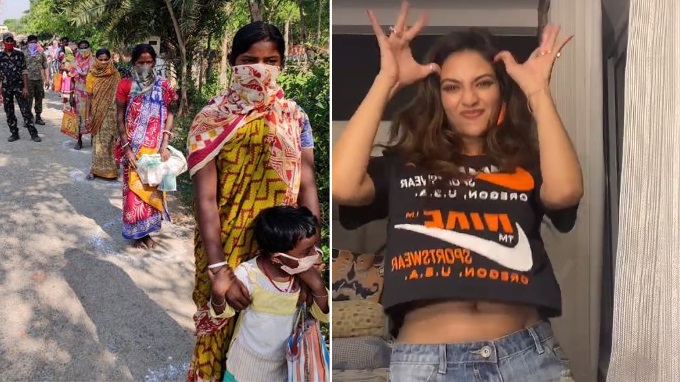 Around 300 people descended on the Basirhat-Malancha road in Kaharpara, West Bengal earlier this week defying Covid19 lockdown directives. They accused the local panchayat of not providing them the ration as per the promises made by the state during the 5-week-long lockdown.

Those who had blocked the Basirhat-Malancha road hailed from about 250 under-privileged families of Pifa village, that falls within Basirhat-1 block in the 24 Paraganas (North) district of West Bengal.

Saraswati Kahar, a homemaker who had participated in the blockade, shared that it had been nearly a month since the announcement of the lockdown and her family was not left with enough rice. The state government claimed to have distributed relief items through panchayats, but the commodities had not reached the poor commoners like Saraswati.  “Most of us are day wage earners and have no money. We are finding it tough to make ends meet.” said Saraswati.

The protest started at 8 AM on Monday morning and continued for three hours; the crowd was addressed by a police team led by Abhijit Sinha Mahapatra who arrived at the site and tried to convince the protestors to call off the demonstration. Mahapatra, who is Basirhat’s sub divisional police officer also assured that he would look into their grievance.

But the demonstrators demanded an on-the-spot commitment from the development officer and asked local panchayat authorities to provide them with the essentials and ration they had run out of. Alamgir Mondal, Deputy chief of Pifa’s gram panchayat spoke to the agitators and promised to supply them with rice within three days.

“There was a delay on the part of the local block administration. We will now prepare the list of the beneficiaries and distribute rations to them. It will take a few more days,” said Alamgir. However, in the face of the  villager’s questions about how would they survive without rice for three days, the panchayat chief had no answers.

While the poverty-stricken residents of her constituency struggle to make ends meet, TMC leader, actress-turned-politician MP Nursat Jahan is busy making TikTok videos like the ones below.

With not a single remark coming from the elected MP on the worrisome situation of those who had voted for her, Nusrat Jahan has established herself as an utterly irresponsible representative of the commoners.  If not  grooving on the video-sharing website, the first time parliamentarian is busy posting her dolled-up images from glamorous photoshoots of the past on Instagram. She is occupied in decorating cakes, preparing chicken, or adding dum to her biryani, completely oblivious to the fact that people in her constituency are almost starving to death, that they are running out of essentials like rice.

But the situation in Basirhat is not unique. A video shared by BJP West Bengal’s Facebook handle exposes how TMC activists are depriving the poor of ration and hoarding the food materials with themselves. The video was shot in Nadia district, and the maker records how food bags bearing the stamp of Food Corporation of India (FCI) are being taken away from ration shops and hoarded in TMC offices.

On being confronted, the hoarders say that they procured these gunny bags with food material from the Municipality office. This dull response further leads to the obvious and unanswered question, “Where did the municipality office get food bags with FCI stamps?”

The video maker comments that this malpractice is being carried out throughout the state of West Bengal, some get caught, others are thriving. There have been other reports as well that villagers in those areas which voted for BJP in past elections are either being denied ration or given less than their quota by the state machinery and TMC party workers.

With the higher-ups busy playing politics and holding the center responsible for every failure of TMC government’s handling of the situation, the under-privileged in the state stay deprived of basic necessities.