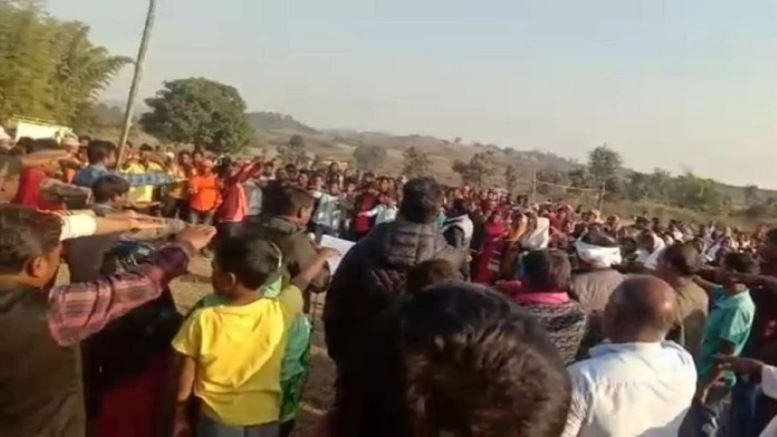 Hindus belonging to Kundikala hamlet in Chhatisgarh’s Sarguja District have vowed to boycott Muslims who threatened to kill all Hindus and burn the village after a scuffle between residents of Aara village and Kundikala village on January 1. A video showing Hindus taking oath regarding the same emerged on social media (SM) on January 6.

In the video, one person is seen administering an oath to around 200 people calling for a ban on Muslim vendors, a boycott of any kind of commercial transaction with Muslims, and a prohibition on selling or leasing land to members of the Muslim community. Reports indicate that the action came as a reaction of Hindus who were angered by the biased attitude of the police.

OpIndia report on the issue notes:

According to reports, the action by the miffed Hindus was deliberated by a scuffle that took place between residents of Aara village and Kundikala village on January 1. In what transpired, a Muslim family from the Aara village, which falls in neighbouring Balrampur district, had travelled to Kundikala village on January 1 to celebrate the New Year. On that day, the Muslim visitors allegedly got into a tussle with a local Hindu resident and thrashed him up. The victim alleged that the six Muslim visitors barged into his house and beat him up and two family members, including his niece.

Subsequently, the victim family lodged a complaint against the Muslim assaulters. Based on the complaint the Chhattisgarh police arrested six people under sections 147, 294, 323, 506, 452 of the IPC, but all of them got bail from a local court the same day.

As the accused burst firecrackers and celebrated their bail, the miffed Hindus gheraoed the Lundra police station, in Surguja district, Chhattisgarh, on 5 January (Wednesday), claiming that the complaint should have been filed under SC/ST act as the victims were Adivasis. Accusing the police of being biased, the villagers gave the police a 10-day ultimatum, asking them to either take strict action against the accused or be prepared for a bigger protest…

…He added that the main accused Ilyas, who is a Block Development Council (BDC) member, asked his accomplice to take out their respective weapons and kill all of them. “They hurled filthy abuses at us. The accused also burst firecrackers and celebrated in our village after getting bail. They openly threatened to kill all the Hindus and burn down the entire village. They are all Muslim. Why they have such enmity with us, we do not understand”, said the girl’s uncle…

…Village panchayat secretary Pural Ram lamented: “When I returned home at 6 pm, the village felt abnormally crowded. Previously, there had been a disagreement that was settled through mutual understanding. The accused afterwards arrived in the form of a crowd. They broke into my house and started hurling obscenities at us. Ilyas was someone I was already familiar with. When I began to explain things to him, the person next to him began to verbally insult me. Then suddenly, Ilyas started to assault me. My granddaughter was also been up. My entire family was assaulted,” exclaimed Pural Ram.

Kundikala villagers have accused the police of shielding the accused and stated that the police should’ve invoked the SC-ST Atrocity Act instead of booking them under trivial sections of the Indian Penal Code (IPC). Inzamam, Mozid, Seraj, Fazal, and Suhail have been named as the prime accused in the FIR registered by the police who added that further investigations are ongoing.

In the meanwhile, a video by YouTube channel Bharat Samman that visited the Kundikala village shows its journalist being harassed and threatened with imprisonment if he failed to switch off the camera by Dilbagh Singh who is the local police station in-charge. Furthermore, the channel’s report also quotes a girl, probably a minor, with a bandage on her head who stated that the accused pulled her out of the house, beat her up, and also tried to drag her into a car.

The girl’s mother also alleged harassment by the police who rebuked them and asked them to keep mum. ‘Around 50 assailants had gathered with big sticks and lathis. Soon after, the cops arrived. When we sought to express our distress to the authorities, we were rebuked and asked to remain silent”, she has been quoted as saying.

Not surprisingly, Chhattisgarh Congress MLAs have denounced Hindus for boycotting Muslims instead of questioning the police apathy against Hindus. While Ambikapur Congress MLA Chintamani Maharaj said that the oath won’t send a positive message, Congress MLA Dr. Pritam Ram blamed the BJP and RSS members who he said were giving the incident a communal color by encouraging Hindus to take such an oath.