Hindu Professor’s Muslim wife abducted by his in-laws, after he refuses to convert to Islam 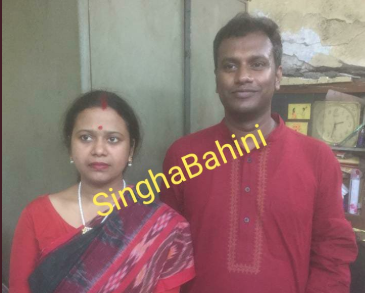 A Hindu professor in Bengal’s Durgapur said that his Muslim wife, also a professor, was abducted by his in-laws soon after their marriage. His wife has currently been detained at her paternal home in Haroa, Basirhat sub-division, North 24 Parganas district.

As per reports, Soumik Das, assistant professor at National Institute of Technology (NIT) Durgapur, alleged that his in-laws were opposed to their marriage since they are from different religions, and they have threatened  him to either convert to Islam or divorce his wife else he would be murdered.

The couple had registered their marriage on July 23 under the Special Marriage Act of 1954, which allows people from two different religious backgrounds to marry. Soumik’s wife, Sahanara Khatun, is an assistant professor at a women’s college at Dumdum, in the northern fringes of Kolkata.

Das wrote to Hindu human rights organization Singha Bahini on July 31, the day after he found Sahanara missing, seeking their help. In his letter he said that on July 30, when his wife came out of their residence at the NIT campus for shopping, she was abducted by her in-laws. Interestingly, Singha Bahini President Devdutta Maji in a tweet stated that the abductors have also given an option to Soumik to meet with Basirhat MP Nusrat Jahan, to resolve the matter.

On August 2, he lodged a complaint with Durgapur police station in West Burdwan district. The police registered a case for kidnapping, abduction and wrongfully confinement and criminal intimidation against Usman Ilias (Das’s brother-in-law) and Bacchu (brother-in-law of Sahanara Khatun).

As per the Hindustan Times report –

“She is at her parent’s house. When we contacted her, she told us she would tell a court whatever she had to say,” said Goutam Talukdar, officer-in-charge of Durgapur police station,

“I had approached Singha Bahini because they had earlier helped rescue some married women who were kidnapped by their family following inter-faith marriage,” Das said on Friday.

Singha Bahini president Devdutta Maji alleged that the family members of Sahanara Khatun were politically influential in Horoa area, around 200 km away from Durgapur.

“It is unfortunate that an adult is being forced against her will on the matter of choosing her life partner. We would try our best to put pressure on the police and administration,” Maji said.”

It is revealing that a Professor did not have enough confidence in the West Bengal police to contact them right away, and instead chose to go to a non-Government body with his plea. It just shows how discredited the police stands in front of the Bengali people today, who view it as a thoroughly politicized, ineffective force which dances to the tunes of ruling TMC’s Muslim appeasement policies.

While the entire liberal class of the country and self-styled social reformist celebrities like Aamir Khan had taken up cudgels over the Rizwanur Rahman-Priyanka Todi case, it remains to be seen whether any of them will utter even one word for Soumik Das & Sahanara Khatun?