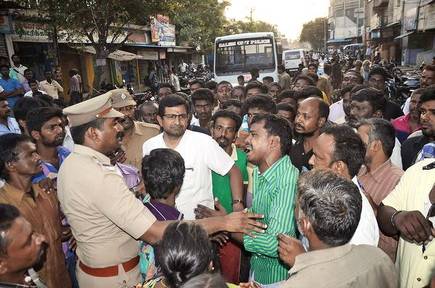 Kareem Compound a Hindu minority ‘conclave’ in Kichipalayam village of Salem district saw Hindus protesting to protect their right to celebrate Aadi festival (18th day of Aadi, Tamil month is an auspicious day for Tamils which is also known as Aadi Perukku, also marks the day on which Hindus pray for abundance in health, wealth and prosperity). On August 2 as Hindu women were getting ready for the Aadi festival by cleaning the temple, applying turmeric to the peetham and lighting deepas, a group of Muslim women protested against it. A report published in The Hindu says that Hindus’ attempt to install Amman idol on the street like every other year faced resistance from the Muslim residents. As a result of this shocked Hindu women went to their houses and came back with kerosene cans trying to immolate themselves in front of the temple against growing islamic atrocities. When they were away the things they kept for puja/worship were desecrated by the Muslim women. They also kicked the deepa kept in the temple as per Hindu Munnani(Hindu outfit that fights for Hindu causes in TN). The Times Of India’s report over this incident claims that Muslim residents prevented functionaries of an outfit who tried to enter the street to ‘worship’ the deity. All this ensued an argument which led to the clash.

Also more people belonging to different outfits of both communities gathered at the spot on hearing about the incident. Both Muslims and Hindus sat on the roads in protest. Local police couldn’t contain the situation which brought the Commissioner, DCP and RDO to the spot. Police tried to pacify the crowd which went in vain. Hindus questioned the sudden opposition of Muslims over this festival for they have been living peacefully in the suburb for more than 60 years and celebrating the same festival without any problem. More information gleaned from this facebook post says that Muslims used to take part in the festival in the past. When police was holding discussions with both groups to diffuse the tension and arrive at a solution, Muslims breached the barricades and shouted slogans against Hindus. They also seem to have attacked Kalaignar TV’s (DMK party channel) cameraman and damaged his properties.

It is clear from all the news reports available on the issue that it was Muslims who provoked Hindus who were going about their business. But the facebook post spread by certain Thamizhaga Makkal Urimai Katchi(TN Peoples Right Party which seems to be a Muslim outfit) people twists the whole issue and present it as Hindus provoking Muslims by trying to install the idol few feet from the mosque. It goes on to say that even though they have let poor Hindus reside on the land belonging to Wakf Board out of pity and charity and one of the Hindus ‘brainwashed’ by Hindu Munnani tried to create problems.

The post also says that Hindu Munnani people were made to sign an agreement saying “As Muslims have let you live on their land out of charity you can’t build a new place of worship there. You should worship outside the compound” and let them off ending the issue then and there. However we get to know from @mahesh10816 that police gave assurance that Hindus in Kareem compound would be allowed to do puja. But there is no news report or claims from Hindu Munnani leaders/cadre that the issue was solved then and there. Most probably they didn’t celebrate the festival on Thursday.

Tamil daily “Dinathanthi” quotes the police where they say that Muslims were not allowed to set up temporary shops in Salem Kottai Mariamman Aadi festival which is why they resorted to opposing a year old festival. Kareem Compound Hindus hold festival during the same period when Kottai Mariamman temple does. However Hindu Munnani leader claims that they opposed encroachments in the temple and asked the administration to take action on removing shops of people belonging to other religions on July 30. Their cadre sat on dharna when EO didn’t give a satisfactory answer on being asked about illegal construction in the temple premises and stealing electricity from the temple for the same purpose.

“On 2/8/17 Muslims rioted, misbehaved with women and attacked Panneerselvam and Rani opposing Mariamman temple celebration in Kichipalayam, Salem. Both the injured persons are admitted in hospital. People belonging to a Muslim outfit attacked Kalaignar TV reporter Sakthivel and his assistant who were there to report the issue. They also damaged his camera. A case has been filed as Sakthivel complained to the police. Police should save the press freedom by taking action. Those who attacked reporters and women must be arrested. Stringent action should be taken on those who blocked a 77 year old tradition and kicked the Thiruvilakku that was glowing forever”

Another post on this issue says “Muslims had encroached Hindus’ cremation ground in Salem, named it as Kareem Compound and collected rent. They made the Hindu residents leave the place forcibly as time passed. Now that Hindu numbers have gone down and Muslims are in majority they oppose a 77 year old tradition of holding Mariamman temple festival saying that it is Haram as per their practices.

It must be noted that both DMK and VCK came together to spread a vile lie that Hindu outfits tried to whip up communal tension while who provoked whom is clear as daylight. This Theekathir (commie DK website) write-up mentions a dalit angle that Muslims think Hindu Munnani is trying to get to the dalit colony adjacent to Kareem compound. If it is true, does everything come down to keeping Hindus divided and ascertaining Muslims’ superiority when they are majority in numbers anywhere? Or is it to make sure to show their power as Hindus are coming together against anti Hindu and communal forces?