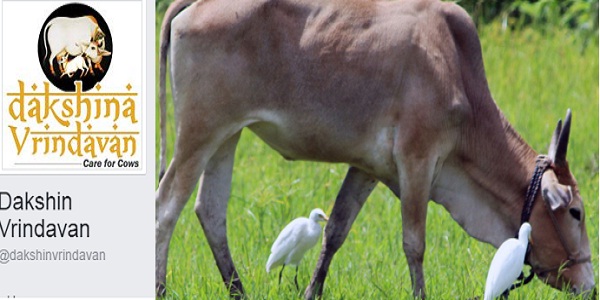 Plight of Cows and their care-takers in Kerala is a major cause of concern if we go by what has very recently happened to Dakshin Vrindavan gaushala in Palakkad. Many pro-communist people in Kerala are increasingly causing trouble to cow care-takers (gau sevaks) in the state.

A trust, which works towards saving the indigenous (desi) cows, empowers the farmers who rear desi cows and works purely on non-profit basis, reverted to Hindupost on our question if a gaushala in Palakkad, Kerala, has been threatened as per random reports floating on social media. As per the information given to us, the details are as follows :

Dakshin Vrindavan Gaushala is based at Karukamai ward in Peruvemba panchayat in Chitoor taluk in Palakkad, Kerala, on a privately owned land by group of trustees*. Here the caretakers have 55 desi cows and bulls. These cows and bulls are the ones which are rescued from the slaughter houses or illegal transporters, or accepted from the farmers, who can no longer take care of them. They are all dry cows and cannot be milked. The set up runs on the donations and virtual adoptions of these cows. The virtual adoption of 1 cow/bull costs Rs. 18,000 a year and also the volunteers collect donations from door to door on weekends.

On 16th October, 2016 around 7 AM, some suspected CPI(M) party workers, about 60 of them, turned up at the gaushala, armed with sticks and demanded the caretakers to remove the cows from the land. When the caretakers refused to do so, they threatened the caretakers that they would kill the caretakers and the cows, if the cows are not removed. One of the trustees, Mr. Ashwin called the Police Sub Inspector, Mr. Bhaseer of Chitoor Police Station and explained him about the threat.

But, after the Police Sub Inspector left, the party workers again came to the gaushala and warned the care takers to take the issue to the court and even threatened them of conducting Beef Festival by killing the cows and bulls of the gaushala. The reason given by the locals, for the removal of cows, apparently is that the cows are taking up the land, which could have been used for growing of paddy. But the caretakers feel that the core of this threat is the direct link between cows/ bulls and Hindutva.

Fearing the consequences, on 16th October itself, they shifted the cows and bulls to Chitoor, in the same Palakkad District in Kerala. But the threat still persists and the cows/bulls cannot get back to the gaushala, which was their home.

(The above information is as given to Hindupost).