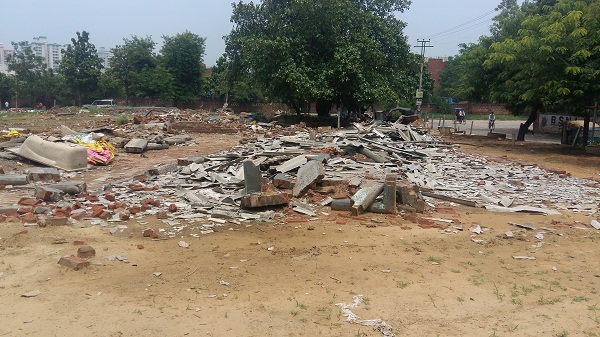 In a recent development in Gurugram (Gurgaon), Haryana, a gaushala has been demolished in South City 1 area by HUDA (Haryana Urban Development Authority) and cows taken forcefully. There is a court case going on for the same plot of land in Chandigarh for more than two decades – the case is between HUDA and the family who was allotted this land by Jharsa village ancestrally to maintain a gaushala and take care of cows.

The legal case has mainly been taken care of by lawyer Praveen Sharma, who lives in a nearby area since long. The government consolidated land pieces here around 1989 / 1990 and each of these siblings were told that they would be given Rs. 8 lakhs and were made to sign / put a thumb print on consolidation papers, which meant that the land would go to the government. The family was not given a choice. This land was about 2 acres and the amount of 8 lakhs was given piecemeal over a span of 10 years. Though initially, this particular old woman (one of the siblings  from the family to whom the land was allotted long back) had refused to take the money – other siblings of this old woman accepted the Government compensation and left the place.

Praveen Sharma had obtained a Stay Order from Chandigarh High Court around 1995. But in early 2000s, the then Congress government got the stay cancelled. Thereafter, another case was filed. In late 2016, the Chandigarh HC ordered to let the gaushala remain on this piece of land. A notice was sent to HUDA notifying the same. However, since then HUDA officials have come to the location 3 to 4 times, created a lot of chaos and demolished the modest set-up. HUDA denied receiving any such court notice as per lawyer Praveen Sharma, and they do not even attend the court hearings. The case has been dragging on and on.

Few days back, the HUDA officials totally destroyed the place and brutally took away the few remaining cows, without informing where the cows were being taken to. This modest gaushala maintained mostly abandoned and old cows, and the care taker family mainly survived on community donations, while taking care of these cows.

This issue was brought to the notice of social media by author Sankrant Sanu, who wrote a tweet series on the issue as he witnessed demolition of this gaushala first hand :

There is a gaushala near our house in Gurgaon which takes care of old cows. I was driving by, saw it being demolished, cows trucked away.

The tweet thread written by him depicts his experience and the treatment that he received from the HUDA officials. His phone was snatched when he tried to click some photos and he got a couple of minor bruises too.  His tweet series contains a very short video too. We visited the location and spoke to the family and their lawyer. In fact, the old cows were dragged so forcefully that their hooves came out, while some cows suffered bruises and cuts : 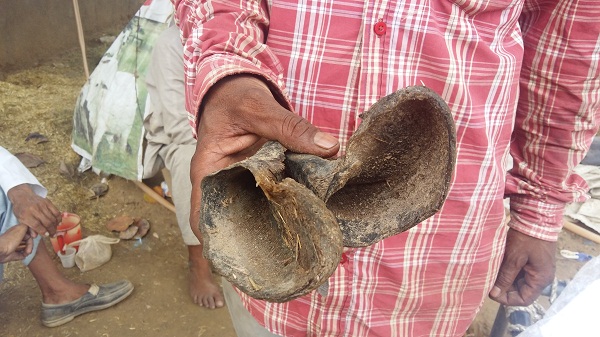 The main plea of the family is that they want a cow shelter here (on part of the land), whether the land remains held by them or the Government.

We spoke to their lawyer Praveen Sharma on the legality of the case and this is what he said : (audio)

Here is a video where the family running the guashala describe their plight :