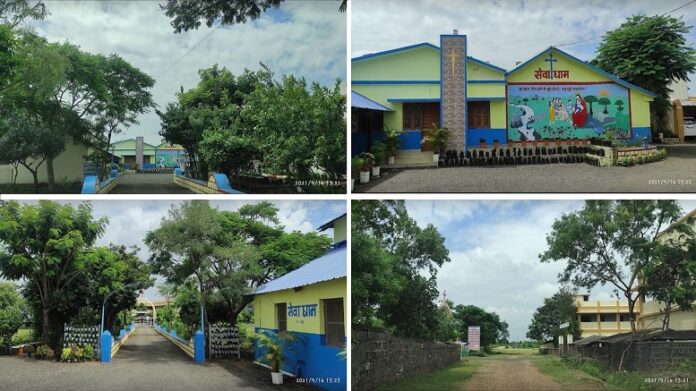 Hindu SC children were forced to eat beef and read the Bible at St. Francis Sevadham orphanage near Bararu in the Sagar district of Madhya Pradesh. They were compelled to learn the bible and anyone who refused had their necks choked till they agreed. It is alleged that cattle are being slaughtered inside the campus.

This is a classic case of how Christian missionaries deceive people and take advantage of their poverty. Deshraj, a father of four including three daughters, is a fisherman and is also employed as a security guard with the forest department. His eldest daughter got married a few years ago. One of the siblings who was sent to the organization is a rape survivor and a differently-abled child.

In view of their financial status, Deshraj expected his children to get a better life and education at the Christian missionary home. However, he wasn’t prepared for the ordeal that awaited him after sending away his children. He had to fight a long legal battle to get back the custody of his children.

The complaint is based on the revelation of siblings who survived the ordeal for 18 months and lived to tell the tale. They were taken there by a lady who called herself a social worker, said Deshraj Raikvar the father of the minors. Though he went to see his children several times, the orphanage authorities did not allow them to meet.

Later Deshraj chanced upon a meeting and that is when the children narrated the torture.  They were forced to eat cow meat, asked to read the bible, beaten up when they refused, and harassed in every manner possible. Deshraj then wrote to the child welfare committee in Sagar about the whole incident and it was escalated to the national level.

Charges against the missionary school include deprivation and violation of child rights and failure to implement laws that provide for the protection and development of children. How did such gross violations occur under the watchful eyes of the local administration is something that the SP will now have to answer. Who are these Christian conversion mafia ladies disguised as ‘social workers?’

Following complaints by a parent, the National Commission for Protection of Child Rights (NCPCR) has ordered the Superintendent of Police to take action and submit a report within 48 hours. Being conducted under the guise of a boarding school for poor children, the orphanage is nothing but a Christian conversion center.

There was an attempt to tarnish the image of the father by the social worker Pramila Maurya who got the children admitted to the home. She alleged that the father had criminal antecedents. While the local police said that he had been acquitted in a 2003 case, Deshraj’s lawyer Vikash Sen also refuted the allegations.

“He had a fake case registered against him in 2003 of which he was acquitted later. After his daughter was raped, Pramila Maurya somehow got him to agree to send his children to the ashram. She promised that his children will get all benefits, good education among other facilities. Deepak is a common innocent village man and upon hearing good prospectus for his children he agreed to send them to the Ashram,” Sen said.

It is also pertinent to note how The Quint report uses a misleading headline to mask the Christian identity of the organization.

Similarly, the report by the Catholic propaganda site UCA News gives the impression that Christians are being targeted in Bharat. The Church often uses its media sources to present a picture of ‘intolerance in Hindu majority’ Bharat. There is a concerted attempt to discredit those leveling allegations against Christian missionaries.

For a long time now Christian evangelicals have been appropriating Hindu names and symbols to lure innocent people into conversion. However, deceptive inculturation has always been central to Christianity.