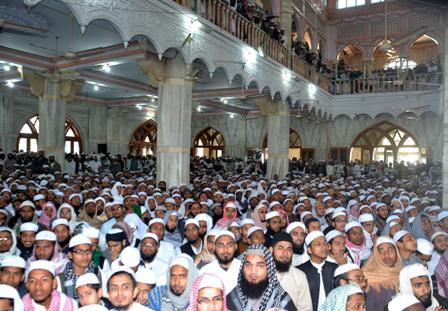 ‘Eminent historian‘ Irfan Habib’s contention that the idea of  ‘Bharat Mata’ (Motherland Bharat) is a foreign import was  backed up by fundamentalist Islamic seminary Darul Uloom Deoband that issued a fatwa (Islamic ruling binding on devout Muslims) banning Muslims from chanting the slogan as it goes against “tauheed” (the idea of worshipping one god), which forms the core of Islam.

The fatwa issued by Deoband says “Actually, some of the believers in Hindu faith consider India a goddess whom they worship. They treat the goddess ‘Bharat Mata’ the patron god and caretaker of the country. This belief certainly goes against the very idea of ‘tauheed’ which forms the core of belief in Islam.”

Deoband admits that only a fraction of Hindus consider the chant ‘Bharat Mata ki Jai’ as worshipping Bharat Mata the Goddess. For many Hindus this slogan is just a powerful means of expressing their love & patriotism for the country. Yet, Deoband is not willing to interpret the slogan in a non-religious sense, and insists on measuring it by Islamic doctrine. And their doctrinal view seems to have the tacit support of other Muslim organizations, as even the Sufi groups that met with the Prime Minister recently to campaign for ‘world peace’ have yet to contradict Deoband.

The mindset prevailing in influential Islamic seminaries like Deoband (the world’s second largest focal point of Islamic teachings, after Al-Azhar in Cairo) should trouble all rational thinkers in Bharat. Lets see some of the past fatwas issued by Deoband

If one goes by core beliefs of Islam, all non-Muslims should be treated as second class citizens (with people of the book i.e Christians and Jews accorded a slightly higher status than ‘sub-human kafirs’ like Hindus). Will Deoband kindly issue a fatwa against this and put at rest 1 billion Hindu minds? Because it such core beliefs which have manifested even in recent times wherever Muslims have crossed a critical threshold of population – Kashmir: all Hindus thrown out by a systematic campaign of religious cleansing; West Bengal: relentless campaign of persecution of Hindus for the last decade through low-level rioting & brutal targeting of Hindu women; West UP – the inflammable communal situation in Muslim dominated districts like Muzaffarnagar (next door to Deoband) speaks for itself. 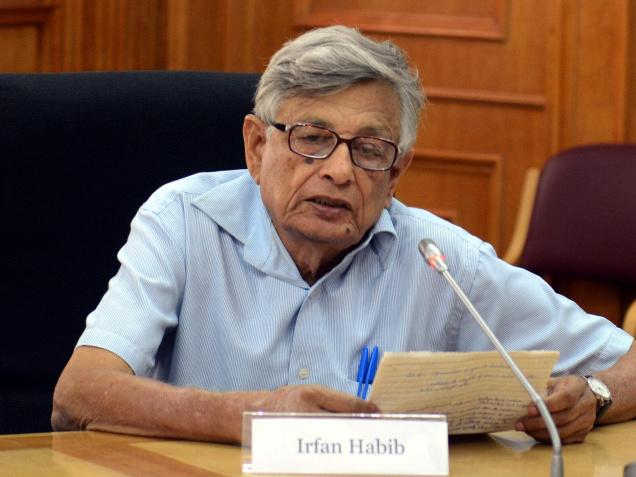 ‘Eminent historian‘ Irfan Habib has averred that the idea of Bharat Mata was an ‘import from Europe’ and there was no evidence of any such imagination in either ancient or medieval Bharat.

As per this report in ‘The Hindu’ newspaper –

“Bharat Mata has nothing to do with India’s ancient or medieval past. It is a European import. Notions of motherland and fatherland were talked about in Europe,” Prof. Habib said, delivering a lecture in the memory of late historian Bipan Chandra at Jawaharlal Nehru University.

Later, talking to The Hindu on the sidelines of the event, Prof. Habib elaborated on his statement. “Bharat is mentioned in ancient India. It was first used in an inscription of King Kharavela in Prakrit. But representation of the country in human form as a mother or father was unknown in ancient India or medieval India,” he said. “This was an idea that emerged in Europe with the rise of nationalism, and it was found in Britain, Russia, etc.”

‘The Hindu’ paper goes on to add –

“Prof. Habib had irked many in the Sangh Parivar months ago too, when he reportedly drew parallels between the RSS and the IS.”

Yes, you read it right – ‘The Hindu’ believes that the statement by Habib that RSS and IS are similar had irked only the ‘Sangh Parivar’ – not the millions of non-RSS Hindus or victims of IS brutalities who found this comparison horrid, distasteful and intellectually dishonest. For ‘The Hindu’ and their left-liberal compatriots in Bharat’s English language media, any rational Hindu who dares to question the dominant media narrative is a ‘Sanghi’ & hence fit to be dismissed as an extremist/reactionary.

Coming back to Habib’s statement – lets assume his assertion, that idea of Bharat Mata is a foreign import and hence not applicable in Bharat, is true. What exactly are the ideals of socialism, secularism and liberalism that Habib and his ilk swear by? Aren’t those also Western imports? Isn’t our Constitution itself heavily influenced by the West? So Prof. Habib has evolved his own subjective standard wherein he dismisses certain ideas as ‘foreign’, while championing certain other foreign ideas! And people like him are supposed to be role models of objectivity and academic rigor!

Did Irfan Habib ever thought of “Foreign Import” when he took Indian History towards **Marxist Perspective** https://t.co/hSj0rTGg2Z

By the way, Habib should educate himself a bit more on Bharat’s heritage. In the Rig Veda, the Mother Goddess is addressed as “prajanam bhavasi mata” (“Thou art the mother of created beings”). Atharva Veda 12.1.12 has “The Earth is mother; I am son of Earth”, and it is entirely unsurprising that our land is personified as Dharti Mata, Mother Earth. The Vishnupurana has “uttaram yat samudrasya himadreshcaiva daksinam / varsam tad bharatam nama bharati yatra santatih” (“Bharata is the land north of the seas, south of the Himalayas, and where the people are called Bharati”). Put it all together in a civilization and it is entirely logical that we see our country as Bharat Mata, and so “jananijanmabhoomischa swargataapi gariyasi” (“Mother and Motherland are both above the heavens”). Where does Europe come into all this?