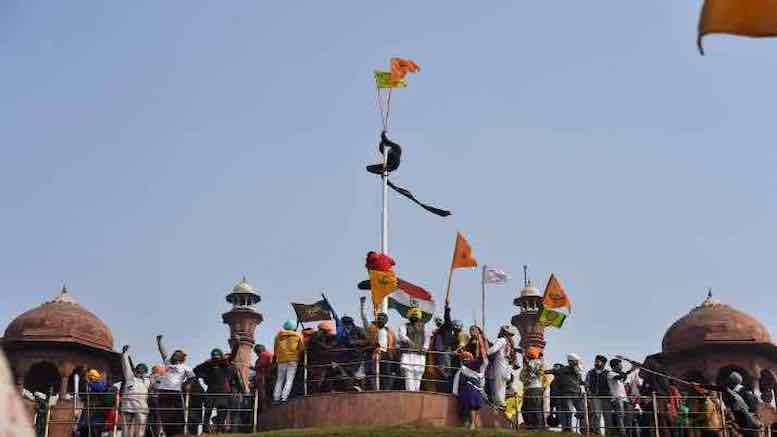 A new video has emerged on social media which leaves no doubt that the events which unfolded at Red Fort on Republic Day were driven by Khalistani supremacism and separatism.

This is the reality. Any left wing alleged journalist & IT cell troll who ask you to believe otherwise are just lying.https://t.co/uWM7MYLUud

The video carries the logo of Akaal Sahai TV, a social media-based news outlet and shows the mob approaching Red Fort. A transcript of what is said follows:

“Quickly lower the Tiranga yourselves…Wahe Guru, Wahe Guru. We again request you Modi, lower this tiranga and raise the Khalsa Nishan Sahib. Have some shame, you shameless man.

“(An elderly Sikh Nihang) We have reached the Red Fort, they should open the gates peacefully, if they don’t…

“(Original narrator) Pehle shanti, phir kranti (First peace, then revolution!). We’ll first request, and even then, if you don’t open the gates, we will use weapons.” At this point a security personnel comes on the scene who folds his hands to appeal to the mob. “Your guns will be used against you…there will be a bloodbath. Open the gates, open them!!” the man thunders.

“Those who deserve to be assaulted by blows cannot be reasoned with…Vadd deyange agar gate nahi kholange (We’ll kill them if they don’t open the gates)…keep your sticks ready (addressing the crowd), if they don’t open the gates, we will hit them on the head, snatch their weapons and attack them. We need AK-47s…chak de phatte nap de killi (a slogan for call to action)..we will hold Modi down over there (pointing at a spot), urinate & defecate on him….feed cow-dung to that khota (donkey/idiot)”

If one goes to the twitter handle of Akaal Sahai TV, the first tweet has a video in which a child dressed up in traditional Sikh attire says a poem Sunn Lai Modiyaa warning “Modi to open his ears and listen up about what is going to happen on 26th”.