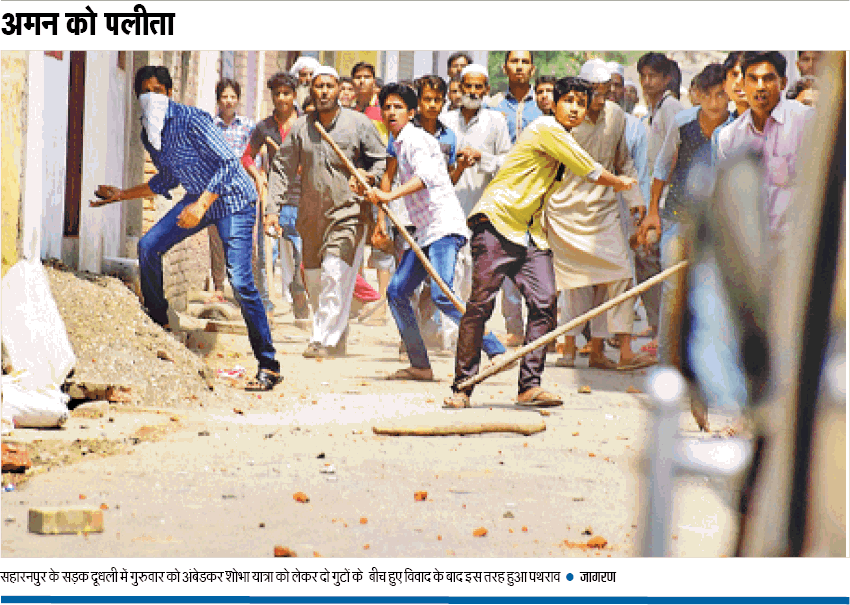 On Thursday, communal clashes took place over the ‘Shobhayatra’ of Dr. Bhimrao Ambedkar in Muslim-majority Sadak Dudhli village (police station Janakpur) adjacent to Saharanpur city in Western UP. There were incidents of abusive exchange, stone pelting, loot and arson between Muslim and Hindu Dalit communities over Dr. Bhimrao Ambedkar’s Shobayatra to celebrate his birth.

Stone pelting & firing by Muslims on the Shobha Yatra caused it to be stopped, and the other side too resorted to violence in retaliation. It is reported that around a dozen people including two policemen, BJP MP Raghav Lakhanpal Sharma and his younger brother Rahul Lakhanpal Sharma were injured, while Saharanpur Commissioner MP Agarwal’s car glass was broken and SSP Luv Kmar’s house was vandalized.

In this village having a population of 7-8 thousand, there are 70 percent Muslims and around 25 percent Hindu Dalits (scheduled caste). For around 10 years now, Dr. Ambedkar’s Shobhayatra has been banned here by past UP administrations as it was considered a ‘communally sensitive’ area. It is pertinent to note that this is a non-religious procession held to honor a man who is regarded as the creator of Bharat’s Constitution – it would be interesting to hear our secular-liberals explain why such a procession would be opposed by Muslim fundamentalists.

According to TOI, SSP Love Kumar is quoted as saying –

“Some groups had sought permission from the administration to take out a ‘shobha yatra’, but permission was not given as it was for the first time that nod for such an activity in the area was sought. According to the orders given to us, no new tradition is supposed to take place in communally sensitive regions. But the groups were adamant on taking out the yatra, and a large crowd entered the village on Thursday. This led to a law and order problem. We manged to control the situation as adequate police force was present and prevented the yatra from continuing.”

But the SSP’s version is conflicting with media reports like this one which say that the ban on the Dr. Ambedkar Shobhayatra is a decade old, implying that this was not the first time permission was sought. Also, it is being reported that an agreement was reached with administration to allow the procession to take place outside the village, but the clash occurred when some members taking out the procession entered the village and were attacked near the mosque.

Around 11:30 in the morning, the Shobhayatra entered the village and the Muslim community immediately started protesting, by blocking the path with a tractor. As the procession reached near the mosque, stone pelting and firing began from rooftops, which led to stopping the procession. The glasses of several vehicles broke due to stone pelting and many people, including policemen and more than half-a-dozen BJP workers including MP Lakhanpal and his brother, were injured. It is alleged that instead of trying to control the mob, police fled from the scene.

Upset by the police inaction, BJP MP Raghav Lakhanpal Sharma and others started a dharna at the SSP’s residence. It is alleged that some CCTV cameras in the SSP’s house were broken and his name plate removed. One nearby person was assaulted by the mob and his bike set on fire – a constable, Rajbir, who came to mediate was also attacked and his hand was fractured.

“I don’t understand why that administration was so adamant in not allowing the procession. Baba Ambedkar is only next to the father of the nation Mahatma Gandhi. The problem is that we still have a Samajwadi Party-appointed administration which is not able to change its mindset after the change of guard in the state. “

Later, it is alleged that a mob of anti-socials blocked the nearby Dehradun road and resorted to vandalism of vehicles passing by. 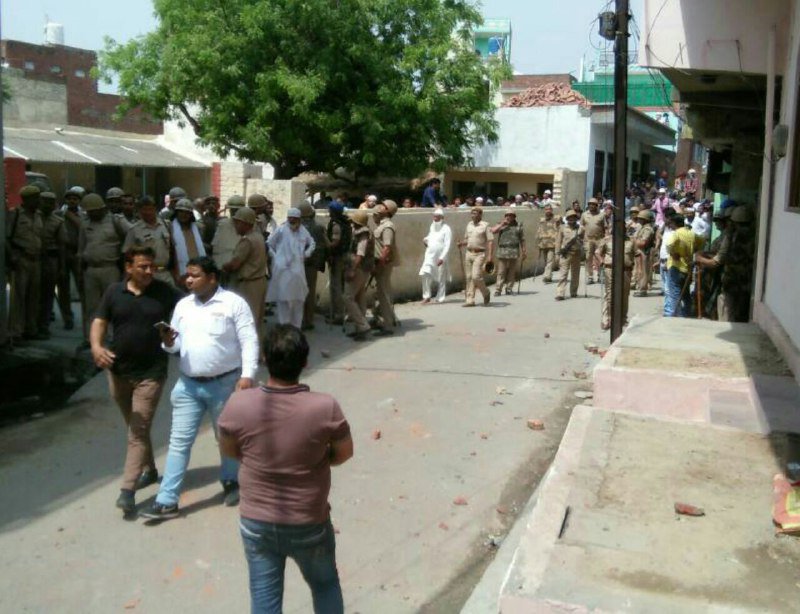 Given the tension, the top officers of police and administration – Commissioner MP Agarwal, DIG Jitendra Shahi, DM Shafkat Kamal, SSP Luv Kumar – reached the spot and the paramilitary forces and additional police forces were deployed in the village. According to the BJP, the police-administration remained a silent spectator during the stone-pelting. This video by ABP News corroborates the allegation of police inaction – it shows stones being pelted as policemen stand watching –

“One could understand if there was opposition to a religious procession, but this was a procession to celebrate the birth anniversary of our Constitution’s maker. When 11 years back this procession for Dr. Ambedkar was conducted in the village, then why not now? The SSP is blaming BJP workers for the incident, will he inform us what action he is planning against those extremists who are hell bent on making Sadak Dudhli into another Kashmir? We will definitely complete the procession soon after due permission from the government.”

The entire situation has been reported to all the top officials of Lucknow, including Chief Minister Yogi Adityanath. DGP of Uttar Pradesh, Javed Ahmad and Daljeet Choudhary, ADG law and order.

The whole district has been declared at high alert. Saharanpur city wore a deserted look and there was deafening silence in the markets. The state government has instructed the police to deal with the culprits strictly.

Incidentally, on Monday there was an incident in neighboring Haridwar, Uttarakhand of a newly-installed Ambedkar statue being desecrated in Mirzapur Sadat village by unidentified miscreants. That incident came just three days after Ambedkar’s poster was torn in Mundate village.