Batla Encounter was not fake, says IM Terrorist – Did Sonia & other seculars cry in vain? 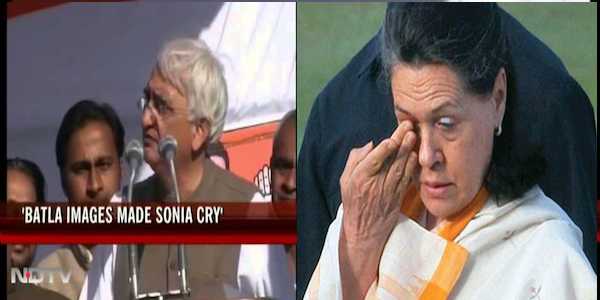 Recently arrested Indian Mujahideen terrorist Ariz Khan has told security agencies that the Batla House encounter was not a fake one, as alleged by several Islamist and secular leaders including Congress President Sonia Gandhi and Delhi CM Arvind Kejriwal.

“Khan told the NIA that his accomplice Atif Ameen tried to escape but was caught by Inspector Mohan Chand Sharma. Atif grabbed the gun from Sharma and began firing. Sharma passed away in the encounter and was awarded the Ashok Chakra posthumously. Ariz also confessed that it was the IM operatives who began firing first following which the police returned fire. He said that the first attempt by the police was to arrest them.

Khan also said that they had planned on targeting various important and prominent places such as Delhi by carrying out serial blasts. The NIA had filed a case in this regard in 2012 against the members of the Indian Mujahideen for waging war against the country. The NIA further learnt that the blasts were carried with the support of homegrown terror modules as well as support from Pakistan. Khan, alias Junaid aged 32, had played a key role in the conspiracy. He was involved in almost all major blasts that ripped the country between 2005 and 2008. The NIA says that Junaid was involved in the serial blasts at Delhi (2005), Varanasi (2006), Uttar Pradesh (2007), Jaipur (2008) and Delhi again in 2008. He was charged by the NIA on September 2014.

Further, the NIA has also learnt that he was part of the Batla House encounter. He was present with four others and had managed to give the police the slip on September 19, 2008. Following the incident, he along with his accomplice, Shahzad had visited their relatives. They moved from Delhi to UP and from there to Rajasthan and later Maharashtra.

After being denied help, they slipped into Nepal. In Nepal, Khan alias Junaid obtained a passport and citizenship under the name of Salman Khan. He then began teaching at a school along with another mastermind Abdul Subhan. He stayed in Nepal till 2014 until he came in contact with IM co-founder, Riyaz Bhatkal. He then moved to Saudi Arabia and was tasked with raising money for the revival of the outfit. He then returned to India and got in touch with the members of the group. He was attempting to revive the outfit with the help of Subhan who was arrested recently. However, when he was scheduled to meet a contact in Uttar Pradesh, he was nabbed. He has been remanded in NIA custody until the 24th of May.”

The Batla House encounter took place on 19 September 2008 in Batla House locality, Jamia nagar, Okhla, New Delhi, in which two IM terrorists, Atif Ameen and Mohammad Sajid were killed while two others  Mohammad Saif and Zeeshan were arrested, and one terrorist Ariz Khan managed to escape.  Delhi Police inspector Mohan Chand Sharma, who led the police action was killed during the incident.

The usual Islamist conspiracy theories of the encounter being ‘fake’ were soon started – first by some students and teachers of nearby Jamia Milia Islamia University and soon picked up by all secular parties like Congress, SP, BSP and even the new kid on the block AAP raked up the issue after it was formed in Nov 2012.

Some of the most prominent defenders of the ‘Batla House was a fake encounter’ theory are:

“I was not a minister at that time but still took the issue of the Batla House encounter to Sonia Gandhi. When we showed photographs of that incident to Mrs Gandhi, she wept bitterly,” Khurshid said, adding, “She asked me to go immediately to the Prime Minister to discuss the matter.”

“We demand judicial probe into the matter in which two youths Atif and Sajid of the village (in Azamgarh) were killed. Both of them had gone to take computer education there and the investigations so far indicate they were innocent”, Yadav said addressing a rally after the Friday Namaz.

Now that one of the terrorists involved in the Batla House encounter has himself admitted that it was a genuine police operation in which the terrorists first opened fire on police killing Inspector MC Sharma before the police retaliated, will our secular leaders apologize for defaming the police and instigating Muslims? This is the ugly face of secularism which has ensured that Muslims remain in perpetual victimhood mode and easy fodder for global Islamist forces who want them to wage jihad against the Hindus.