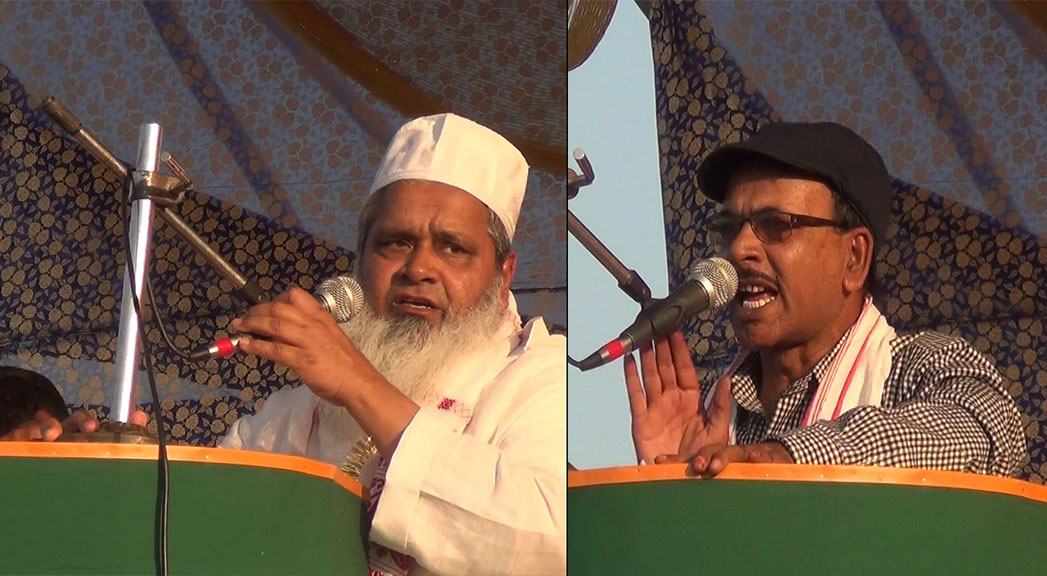 Former Assam MLA Sheikh Shah Alom of the Islamist political party AIUDF (All India United Democratic Front) has made a chilling threat that a day would soon arrive when Muslims would attack Hindus. This comes on the heels of Maulana Syed Arshad Madani, the chief of Jamiat Ulema-e-Hind, recently threatening in Delhi that ‘Assam will burn, there will be killings and retaliation if 50 lakh Muslims are left out in the ongoing Supreme Court-monitored updation of National Register of Citizen (NRC).

As per local and regional media reports, Alom said, “Muslims ruled the country from 1199 to 1897, but committed no atrocities on Hindus during that period. However, Muslims have been discriminated against for the last 70 years and there is a conspiracy against Muslims. However, Muslims are more in number in Assam now. If things continue like this, Muslims will attack..they just need some time.”

Alom further added that when a BJP member says that the Muslims should be shot just like Myanmar then no one seems to care. But, when Arshad Madani said that Assam might face a Myanmar like situation if more than 50 lakh people are deprived of their rights by removing them from the NRC, then huge uproar was seen in the country.

He added, “But we (Muslims) will not move to Bangladesh, we would rather move to China or Burma”.

It is not clear which BJP member’s statement about ‘shooting Muslims just like Myanmar’ Alom was referring to – no such statement has come to light in recent times, and if such a statement had indeed been made, vicious left-liberal outlets like The Wire, Scroll, The Print etc would have been all over it. It appears to be an entirely made up accusation used by Alom to instigate the Muslims masses.

Alam made this call to violence in a public address at a time when AIUDF supremo Badruddin Ajmal was also on the stage. Sensing the danger to his party’s legal status, Ajmal dissociated his party from Alom’s comments and termed it his personal opinion.

It is reported that Alom has since resigned from the party, and AIUDF has claimed that Alom’s statement was a conspiracy to defame the party and also alleged that he was being used by the Congress party.

Incidentally, Badruddin Ajmal, who is also president of the Assam State Jamiat Ulema-e-Hind and a ‘master’s degree’ holder in Islamic Theology and Arabic from Deoband Islamic seminary, is quite a favorite of the Delhi-based media cabal who had anointed him as the ‘perfume king’ and presented him as a powerful kingmaker from the North East in the ‘secular’ scheme of things.

Most national mainstream media has blacked out this blatant hate speech by the ex-MLA Sheikh Shah Alom. Times of India appears to be the only national English language outlet that has reported this speech, but even its headline makes it sound like the AIDUF leader’s words have been twisted and what he said wasn’t really hate speech.

If a naked call for Muslims to attack Hindus given their numerical strength is not hate speech for TOI, one wonders if even a speech by Hitler against the Jews would qualify?

As expected, not one liberal or ‘progressive’ Muslim has yet condemned JeI’s Madani or AIUDF’s Alom for their hate-mongering and threats of violence over a sensitive, long over due SC-monitored citizen verification drive in a border state that has long born the brunt of illegal immigration from Bangladesh. Neither has any eminent historian offered Alom any history lessons on what really transpired in the period from 1199-1897 when millions of Hindus were either killed or enslaved and our country’s wealth plundered by invading Muslim hordes.