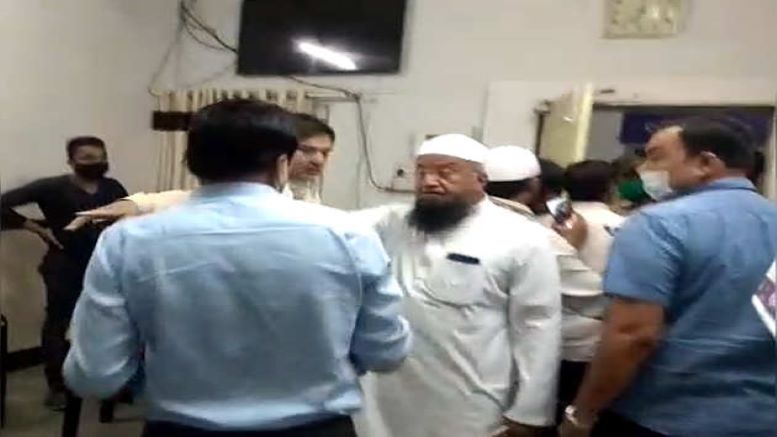 Amid the Corona scare when medical professionals such as doctors, nurses, hospital staff are working round the clock to treat patients, an AIMIM (All India Majlis-e-Ittehad-ul-Muslimeen) MLA (Member of Legislative Assembly) and his supporters created ruckus at a hospital in Malegaon obstructing hospital staff from doing their duty.

With Maharashtra under complete lockdown, MIM MLA Maulana Mufti Mohammad Ismail along with 20-25 of his supporters entered the government hospital in Malegaon around 8 PM on Wednesday and attacked medical officer Dr Kishor Dange for not answering his phone calls. Two suspected corona virus patients are currently under treatment in this hospital which has been working day and night like other hospitals in these difficult times. At such a time, instead of standing by and supporting the hospital staff Maulana and his supporters have interfered with the smooth functioning of the hospital. The mob lead by Mufti entered the chamber of Dr Dange and began abusing him loudly.

Some of Maulana’s supporters even manhandled Dr Dange and Dr Patil. Following the incident hospital staff stopped all work and sat in protest outside the hospital building. What comes as a shock is that the entire episode took place right under the vigil of the police who were mere mute spectators. How was such a large gathering allowed when Section 144 has been imposed in Maharashtra? It was not until late at night that senior police officers took the matter in their own hands and began investigations.

Explaining the entire incident a doctor from the hospital says that they tried to calm the mob and requested them to put forth their views calmly and even asked them to wear masks. One of the doctors Dr Yogesh Patil even provided them masks but the mob refused to listen and continued abusing the doctors and hospital staff. The ruckus continued despite the doctors repeatedly assured them that they were ready to listen to their views. When Dr Dange went to fetch the court orders to explain the entire situation to the MLA and his supporters, the mob obstructed him and would not let him go. They even physically assaulted one of the staff who tried to intervene.

One suspected corona patient is admitted in malegaon civil hospital & hsptl staff is working day & night to get the control over Corona crisis.