The Spurious Case of Kashmir 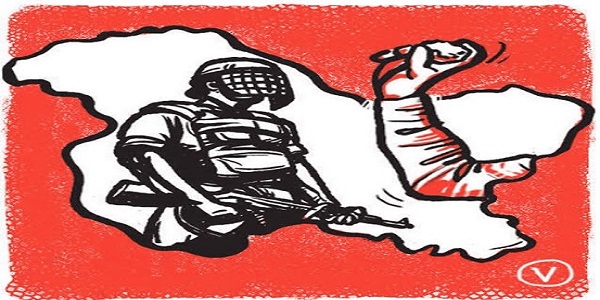 Kashmir, the northernmost part of Bharatiya state of Jammu and Kashmir, has been the most discussed and covered one in the past 3 decades. Majority of the attention grabbed by the valley of Kashmir, was for the bad, inhuman and uncivilised influences. Kashmir valley is being identified as amid a crisis.

The entire state and central government structure focused itself on stabilising the valley and bringing tranquility to the people. The credibility of the governments, in past 3 decades, was judged on the parameters of its performance in resolving the Kashmir issue. Still, the case of the valley remains unresolved and exceedingly daedalian for the fresh pair of eyes.

The answer to the real motivation for insurgency and unease in the Kashmir valley, still remains misplaced in spite of more than 30 years of administrative-political experiments.

The reason behind the shortcomings of successive governments, lies in the improper identification of root cause of crisis. Governments, media and the establishment are delusional towards the real problem and instead focuses on unreal fallacies and phoney causes fed by the bewildered.

Pseudo-secular and Pseudo-liberal class of ‘intellectuals’ have fed their version of Kashmir problem to the entire country pushing forward the agenda of ‘Kashmiriyat’ and arguing for no practical extremism in the valley, while artfully veiling the root causes. This practice of turning away from reality has inflicted serious damage to the state of Bharat, the same practice which caused half of our Kashmir to get snatched by the enemy in 1947.

Major verbal reasonings provided by the ‘intellectuals’ behind Kashmir problem are hollow and hold no ample water. And accepting those reasonings as practical and realistic, has been proven delusional for every governments in the past.

Unemployment, perhaps the most unrealistic reasoning for the extremism in the valley, has turned out to be a sham. Often the extremists or terrorists themselves have proven the unemployment cause as utterly unrealistic. To put that in perspective, overall unemployment in the state of Jammu and Kashmir, as per latest data, stands at 5.4%.

While at the same time, as per same data, overall unemployment for Uttar Pradesh (6.2%), Bihar (7.0%), Jharkhand (7.5%) and Telangana (7.6%) is staged way higher than Kashmir. Per capita income of Kashmiri youth also stands on comparatively higher grounds than many other states.  If unemployment was the reason for the youth to pick up guns, then Kashmir would not have been at the leading helm of extremism.

Some also argue about the alleged indifferent behaviour of centre towards the state of J&K, as the driving force behind youth joining terror outfits. The reality, though, is in sharp contrast to the view. Jammu and Kashmir which accounts to only 1% of Bharat’s population receives around 10% of total funds from the central government, while Uttar Pradesh, Bharat’s most populous state with approx 15% of total population, receives only 8.2% of central grants. The reason behind terrorism in the valley was never poverty, unemployment or under-development, as left’s ‘eminent intellectuals’ tried to project.

There’s also a disingenuous phoney propaganda aimed at establishing a belief that Kashmir has been culturally closer to Central Asia than to Bharat. However, ill informed, puerile and ludicrous the claim may be but it has garnered some audience ready to believe. The Anti-Bharat propaganda machines tries every trick in the book to exploit the claim to further worsen the crisis and centre’s attempt at establishing a ‘Kashmiriyat’ with Sufi ideological footprints will eventually help the propaganda.

Either way, in any form, cultural allegiance of Kashmir to any civilisation other than Bharat is purely fatuous and no properly functioning mind can link that to terrorism in the valley.

Another major and vacuous attempt at justifying extremism and terrorism in the valley is to project alleged ‘atrocities committed by security forces’ as the reason behind youth picking up weapons. The reason is, in words of Ashish Dar, the “most fallacious excuse for terrorism ever invented”. The propaganda attempts to reason the terrorism with cherry picking minor incidents in order to gather sympathies for the terrorists and put security forces in the bad light.

The phrases calling the terrorist as a ‘20 year old boy’, a ‘Dhoni fan’, a ‘PhD scholar’, a ‘Son of a school master’ etc are attempts at justifying terror and extremism while at the same time pushing the average civilians further away from the realm of cruel reality of the valley.

Terror justifiers require a scapegoat to throw all of their blame on and shield the real culprits. Linking every terror activity in the region to Pakistan and shielding the real radicalising fundamentals and factors in the valley is a prime example of that. The Bharatiya state and society has to grasp that not all the terrorist in the valley cross the LoC, some like Pulwama bomber Adil Ahmad Dar, are local youth itching to harm the stability and tranquility of the region. All terrorist can not be categorised as ‘sent by Pakistan’. Some Kashmiri youth, though trained and equipped in Pakistan, will-fully take the decision of harming their own country.

The nation and, most significantly, average civilians must understand the real causes and inspiration behind extremism in the Kashmir valley. No amount of propaganda and misleading spurious agendas can divert the seeking mind from understanding the real cause of terrorism in the valley – the religious radicalisation.

Radicalisation is the biggest reason behind continued terror and extremist activities in the region and understanding that is not too difficult looking at the terrorists. Youth in Kashmir are consistently fed with extremist religious fundamentals inspiring them to hate kaffirs and mushriks, non-believers, and to establish the Islamic caliphate in Kashmir.

The fact that Pulwama terrorist Adil Dar called Hindus ‘cow piss drinkers’, ‘napak mushrik’ and called himself a ‘warrior of Islam’ itself makes it pellucid and unambiguous about the religious inspirations behind the attack. No amount of sugar coating or shielding can change the fact that extremism in the valley is, in fact, the religious extremism fuelled by unethical extremists fundamentals of Islam.

For the nation to curb terrorism in the valley, government must act on exterminating these fundamentals and their propagators. The state can not afford refusing the reality and being delusional for too long. All the measures taken so far were unrealistic measures aimed at fighting the battle at wrong war turf.

All the governments in the past have worked on the Kashmir problem as a bunch of confused cats. The case of Kashmir is a spurious one with loads of confusing and misleading factors behind it. And hence, it is exceedingly important for the state and the society to focus on real reasons rather to get stuck in fighting causes playing no part.

The state of Bharat must hold the snake of terrorism from its head and not try to hold it from its tail. The head of the snake is religion. Government must act preventing further radicalisation in the valley and bringing in consistent de-radicalisation.