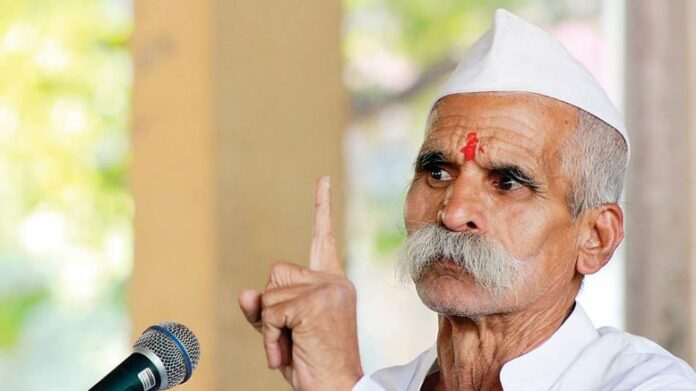 Shri Shivpratishtan’s activist-leader Sambhaji Bhide Guruji refused to entertain a Saam TV reporter unless she sported a bindi. As expected, the liberal brigade was up in arms targeting Guruji and terming his demand as ‘insulting’ women. The incident took place after Bhide Guruji’s meeting with CM Eknath Shinde at Mantralay.

In the video when the reporter asks for a byte, Guruji says “I will talk to you after you put on a bindi. I believe that every woman is a form of Bharatmata. Bharatmata is not a widow. So wear a bindi & I’ll talk to you”. One fails to understand what is insulting here. Is equating every female to Bharatmata an insult? It would be so only in the view of those who disrespect Bharatmata.

Not surprisingly, State Women Commission headed by Congress-ally Nationalist Congress Party’s (NCP) Rupali Chakankar served a notice to Bhide Guruji. The notice says, “you refused to give an interview to a female reporter as she wasn’t sporting a bindi. A woman’s work and not what she wears defines her. By your comment, you have enraged the people of Maharashtra. The women’s commission wants to why you refused to give an interview to the reporter unless she put on a bindi”.

In her tweet accompanying the notice, Chakankar accused the activist of insulting women and journalism. She alleged that he had made such statements that ‘belittled’ women. However, one of the users rightly pointed out that the commission had simply turned a blind eye to Shiv Sena leader Sanjay Raut hurling abuses during a press conference.

It must also be noted that Chakankar was missing in action when a 13-year-old minor was brutally raped in Kolhapur. NCP’s Hindudvesh (Hindu hate) is evident in Chakankar’s biased actions. The Congress also displayed its Hindu hate as several of its leaders from the state came out in support of the journalist. The cabal targeted Guruji using the usual ‘Manusmriti’ and ‘Brahminical patriarchy’ trope. It is worth highlighting that many times posts such as these become a tool for ‘handing positions to rewarding party members.

Equally disappointing (to say the least) was the view of Amruta Fadnavis. “No one should dictate what women should do”, she opined. Well, it is doubtful if she even heard Guruji’s statement or presented her view in order to score a point with the liberals as many BJP leaders and those associated with them often do. For Amruta’s benefit, she should know that he only refused to talk to her unless she put on a bindi and he is well within his right to do so.

The Hindudveshi media took it as an opportunity to target Shri Bhide. The Indian Express report put the word Guruji in quotes to insinuate that the title wasn’t apt for the activist leader. It also used terms such as ‘right-wing leader’ and ‘known for controversial comments’ to cast aspersions on Guruji. Several ‘journalists’ (read Presstitutes) from Maharashtra also ‘stood with’ the Saam TV reporter.

Free Press Journal labelled him ‘sexist’ and carried the usual ‘Hindutva’ label that the anti-Hindu media uses to attack Dharmic leaders and give a negative connotation to the term.

It is amply clear that the entire issue is being blown out of proportion to target Bhide Guruji owing to his Dharmic roots. Moreover, they can hardly digest the fact that he is a leader who works on the ground for Hindus and preserves Hindu culture.

He is a PhD in Physics with a gold medal in MSc. In the 1980s, he quit his job as a professor at Pune’s Fergusson College to pursue his passion for preserving the forts of Chhatrapati Shivaji Maharaj and mobilizing the youth to participate in conservation efforts. The so-called Purogamis (Progressives), who use Chhatrapati’s name for political mileage, have hardly done a minuscule portion of Guruji’s work in this regard.

“He has been living here for the last 40 years. He uses an old bicycle to travel and walks barefoot. He has no belongings except books and the jute sacks he uses as a mattress and a towel as a pillow”, TOI quotes his neighbour Vaishali Bapat as saying.

“To another question on the state government’s decision to stop religious ceremonies in their offices, Bhide said he is offended by such a move as India belongs to Hindus. He says at a time when Hindu civilisation should be followed by the entire world, following secularism will damage the country. To live by the ideals of Chattrapati Shivaji is Hindutva according to Bhide. He wants the Hindu community to follow Shivaji Maharaj and Shambhaji Maharaj’s principles on how to live and die for the country. That should be every Hindu’s goal, said Bhide”, says Boom Live in its article on Guruji.

Only the ‘liberals’ will outrage when asked to sport a symbol inherent to Hindu Dharma only because it comes from someone whose ideology they disagree with. Those who use Rajmata Jijau’s name for their poliitics would do well to remember that she stood for protecting Hindutva and they who oppose it have no right to use Rajamata’s name.