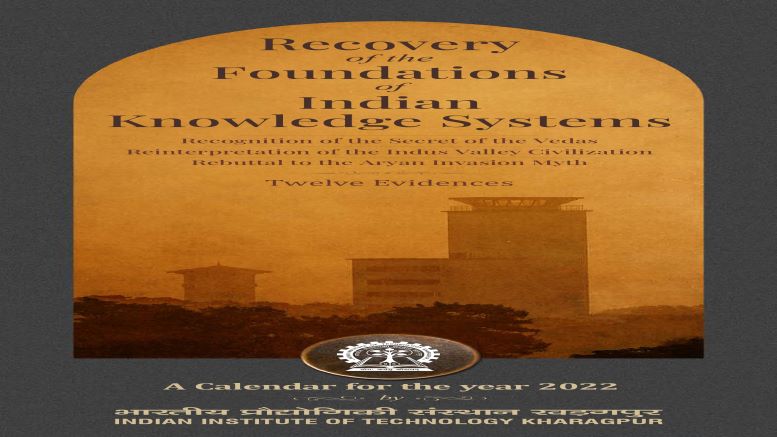 IIT Kharagpur’s Centre of Excellence for Indian Knowledge System has launched a calendar busting lies with respect to Bharatiya history thus far propagated by leftist historians. The calendar has twelve pieces of evidence that along with providing a rebuttal to the Aryan Invasion myth also recognizes the secret of the Vedas and reinterprets the Indus Valley Civilization (Sindhu-Saraswati Civilization).

“We bring Indian-ness to the knowledge system. By virtue of that, Indian students will become more global but will also emerge as true Indians. That has nothing to do with the idea of fascism or nationalism. There have been a lot of wrongdoings in the past. We are choosing what has been neglected and suppressed in the past,” Chairperson Prof. Joy Sen had said at the launch of the calendar on December 18.

The calendar also questions the current chronology of Bharatiya civilization while adding that the country’s ancient history has been a victim of suppression, compromises, contractions, and distortions. “The calendar never focuses that much on whether the Indus Valley Civilisation precedes or succeeds the Vedic age but has proved, based on race and genetics, that there was no Aryan invasion. The fallacy of the Aryan invasion myth is a matter for disapproval and rejection now, which is what the calendar does”, opined Prof. Sen.

Any celebration of Indic knowlegde never goes down well with the cabal. In keeping with their agenda, the leftist media such as The Wire and The Scroll were quick to jump into the fray to term the effort ‘unscientific’ and an effort to ‘push a specific ideology’.

The Wire article uses the usual arguments of Hindutva, BJP, RSS, ‘saffronisation’, attempts to rewrite history, and the like. While presenting ‘scientific evidence’ to ‘prove’ that the calendar lacks scientific basis, it quotes Tony Joseph whose arguments in this matter have earlier been shown to be flawed in this rebuttal.

The author also brings in Romila Thapar to argue that the Hindutva ideology is being deliberately pushed. “Romila Thapar, one of India’s foremost historians specialising in ancient times, said that proving Aryans to be indigenous to India is crucial for the Hindutva forces to defend their ideology, even though historical findings do not tend to support that notion”, writes Snigdhendu Bhattacharya.

There is little doubt that the author brings in his personal bias against BJP and RSS which was evident from his coverage of the post-poll pogrom in Bengal where his report conveniently makes no mention of the murders and rapes of BJP workers.

The Scroll‘s Seshadri Kumar who wants Bharat to be ‘thankful‘ to Khilji for ‘stopping’ Mongol invasions, writes “The calendar aims to show that Hinduism is the product of an indigenous civilisation of India (the Dravidian civilisation) and was not brought to the subcontinent by an invasion or migration of foreign tribes (known as the Aryans) from Iran and Central Asia”.

That he refers to the indigenous civilizations as Dravidian, despite ample evidence of the fact that the Aryan-Dravidian divide was a creation of European scholars to suit their own agenda, is proof enough of his bias.

At one point he argues “On the page for March, there is some discussion of the Rigveda, but the image shown is that of the Buddha. The same image has the image of the “Pasupati” seal (what is considered to be the “Shiva” image – the primeval yogi) found in the Indus valley seals to the right of the Buddha’s head (from our perspective), but has a nonsensical image on the left side that is not seen in any seal”.

Kumar fails to grasp the fact that the image has been used to depict the tradition of yogic meditation as can be seen in the images of both the Pasupati Mahadeva and Buddha. A similar attempt is made to diss the other information provided in the calendar. “The first requirement of good research and good science is the absence of bias. Instead, this is an effort to push a specific ideology”, The Scroll author says. Little needs to be said about the kind of bias one harbors when he believes that Alauddin Khilji ‘saved’ Bharat from Mongol invaders.

The first requirement of good journalism is absence of bias but the articles by the portals are an attempt to peddle the usual agenda to discredit anyone celebrating Indic knowledge.

The problem of knowledge in primitive and civilised society

Turning the table on Project Pegasus!