One has almost come to expect it nowadays, the obligatory swipe at Hindu beliefs & and customs in mainstream Bollywood masala movies. A few decades earlier, the propaganda was subtle stereotyping of the ‘immoral Hindu priest (brahmin) & trader (baniya)’ vis a vis the ‘pure-hearted and pious Muslim & Christian clergy/uncle’. Now it is a frontal assault on core Hindu beliefs like murti-puja, incessant demonization of Hindu sadhus & sannyasis as criminals & conmen, and glorification of exclusivist Abrahamic religions.

So is the case with the Akshay Kumar starrer ‘Mission Mangal’. The topic chosen by the movie is praise-worthy as one hoped it would motivate youth to excel in science & technology. But it completely trivialises the scientific accomplishment of MOM (Mars Orbiter Mission), and presents a distorted image of a top-class, professional organisation like ISRO.

This incisive take-down of the scientific aspects in the film shows that Bollywood is still not willing to invest the painstaking research that goes into making a commercial entertainer on a scientific topic.

Moreover, the movie introduces completely fictional and irrelevant details that show Hindu Dharma as ridicule-worthy and Islam as cool. This short review by the scholarly Nithin Sridhar, a practising Hindu, author and editor of IndiaFacts.org says it all– 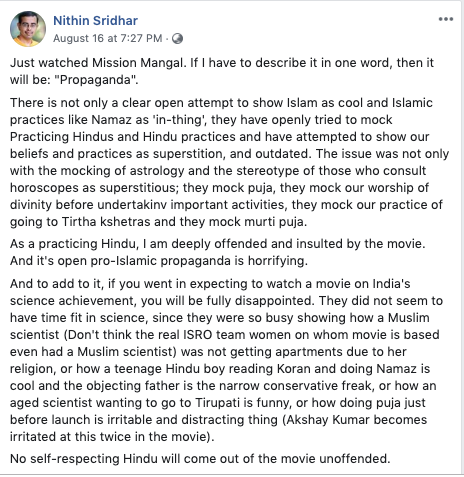 Apart from this blatant Hinduphobia, what was also jarring was that the movie completely replaced all Dakshin Bharatiya scientists with stereotypical Bollywood beauties, rather than cast women closer in appearance and accent to those who actually achieved the feat.

Many consumers of this staple Bollywood fare would also be unaware that the idea of ‘Mission Mangal’ movie was copied from the script of the upcoming movie ‘Space MOMs’ by US-based film-maker Radha Bharadwaj.

Space MOMs’ trailer was released in June, and the movie seems to be a far more authentic rendering of Bharat’s 2014 Mars Orbiter Mission (MOM). It tells the real story of normal, middle class working moms who just so happen to be rocket scientists by day. And about how Bharat’s space-age achievements are rooted in our ancient civilization & culture.

In 2018, Radha Bharadwaj filed a lawsuit seeking to halt the production and release of ‘Mission Mangal’, claiming that the movie infringes on the copyright of her original screenplay that she had shared with Atul Kasbekar  in 2016. According to Bharadwaj, Kasbekar’s studio — Ellipsis Entertainment — then shared the script with Balan, one of its clients, who is now the lead actor in ‘Mission Mangal’ based on the same idea.

However, ‘Mission Mangal’ went on floors in Mumbai on November 23, two days after reports of Radha’s lawsuit surfaced in the media. By Bollywood standards, the movie was completed and released in a record 9 month period, most likely to pre-empt ‘Space MOMs’ & jeopardise its prospects.

On 10 Aug, the Bombay High Court refused to grant a stay on the release of Mission Mangal, but the copyright infringement issue has yet to be settled.

This interview with Radha Bhardwaj shows how she got the idea about the film with an aim to ‘present a different perspective on India: a positive one, for a change.’, and how living in the West she was ‘increasingly dismayed at the near-consistent negative depiction of India in media and entertainment’.

Radha Bhardwaj actually did extensive research on the topic, interviewing several ISRO scientists and engineers from Feb, 2016 onwards after obtaining official permission from ISRO. Crucially, she says, those in-depth interviews revealed how all members of the ISRO team were ‘rooted to our culture and practices (mantras, meditation, etc).’

And here we have Mission Mangal mocking Hindu practises and glorifying the Koran, a religious book which claims that disbelievers and polytheists (like Hindus) will burn for eternity in the after-life!

What drives such self-hate and Hinduphobia? This is a question which each Hindu should ask of the entire team of ‘Mission Mangal’ – director Jagan Shakti (@jaganshakti), producer & writer R Balki, Fox Star Studios (@foxstarhindi), leading stars Akshay Kumar (@akshaykumar), Vidya Balan (@vidya_balan) and others.

Until we rise and challenge these popular culture icons, who feed off our money while taking us for granted, we will continue remaining mental slaves. Film-makers who swim against the tide of Bollywood’s political correctness are a rare breed indeed, and we the ordinary citizen should back such people to the hilt.

Why didn't I seek money from #bollywood for #SpaceMOMs? Because it became clear that they, as an entity survive on the denigrationbof Indians. #Mangalyaan was a symbol of Indian excellence. Why take a lamb to the slaughter-house?

Supporters need to let the government know that they want a film that will make them hold their heads high to be Indians: inheritors of an amazing heritage. #SpaceMOMs has no glamour, no famous stars. All it has is a deep-seated respect for India's ethos. https://t.co/4dEkODPHdm